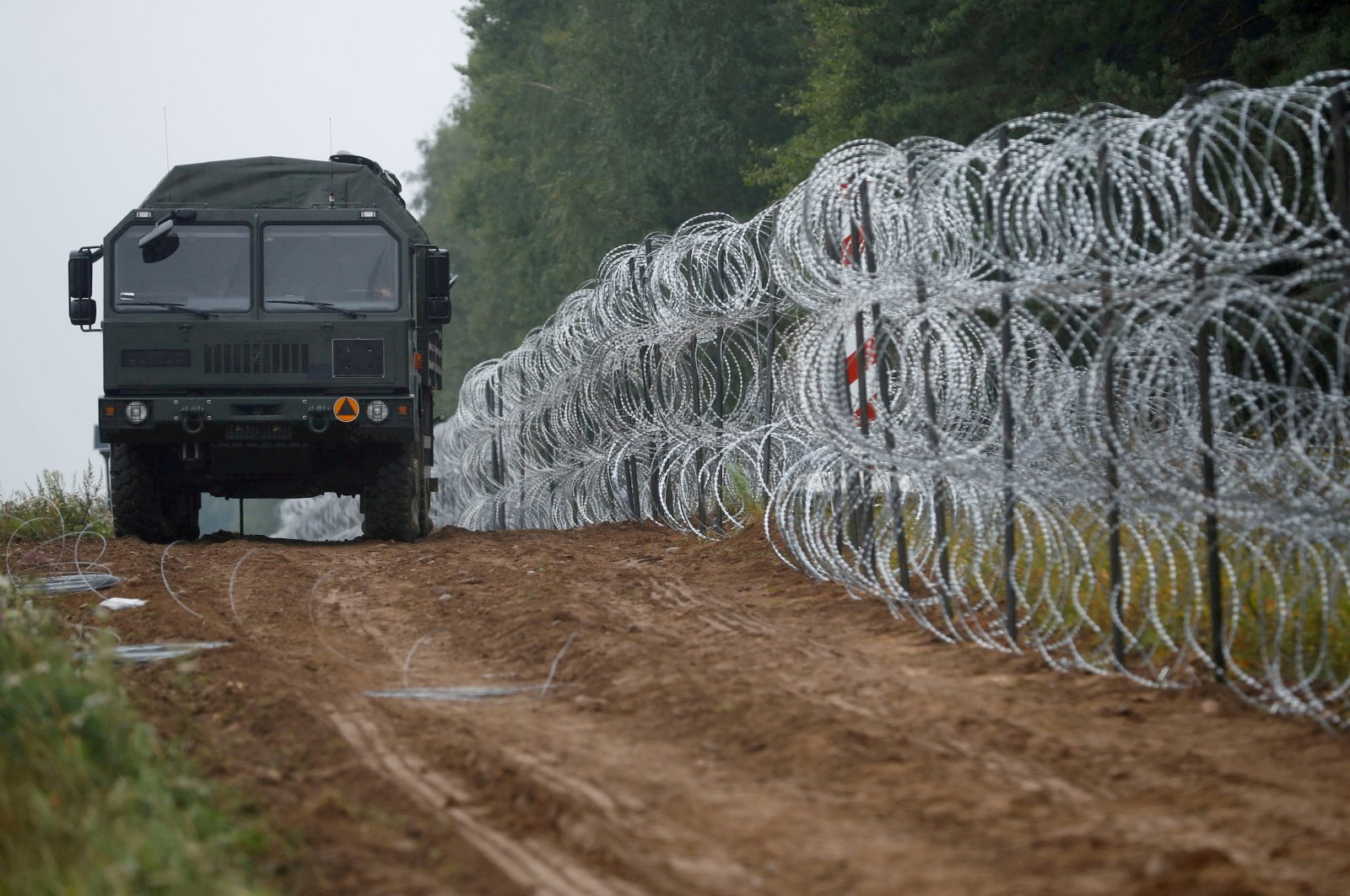 A view of a vehicle next to a fence built by Polish soldiers on the border between Poland and Belarus near the village of Nomiki, Poland, Aug. 26, 2021. (Reuters Photo)
by ASSOCIATED PRESS Nov 08, 2021 4:05 pm
RECOMMENDED

Poland increased security at its border with Belarus, on the European Union’s eastern boundary, after a large group of migrants in Belarus appeared to be congregating at a crossing point, officials said Monday.

The development appeared to signal an escalation of a crisis that has being going on for months in which the autocratic regime of Belarus has encouraged migrants from the Middle East and elsewhere to illegally enter the European Union, at first through Lithuania and Latvia and now primarily through Poland.

The European Union said it hoped that Poland, an EU member state, would finally accept help from Frontex, the border agency, a step Poland's ruling nationalists have so far refused.

In Brussels, a European Commission spokesperson, Adalbert Jahnz noted that "several hundred people” were gathered near the border, an imprecise figure that he said came from Frontex.

He said: "this is a continuation of the desperate attempt by the (Belarusian President Alexander) Lukashenko regime to use people as pawns to destabilize the European Union and of course the values that we stand for.”

He suggested that the commission would like Poland to request Frontex's help, saying that the best way to manage a common border is with shared resources. He confirmed that Poland has not requested this help so far.

Polish Defense Minister Mariusz Blaszczak said on Twitter that more than 12,000 soldiers have been deployed on the border, up from the 10,000 soldiers that were there recently. He added that a volunteer territorial defense force was put on alert.

He also posted video footage of what appeared to be a large group of migrants just across the border in Belarus near Kuznica, in northeastern Poland.

Media reports said Belarusian authorities have escorted as many as 500 people, mainly from the Middle East.

The Polish government scheduled an emergency meeting, with Prime Minister Mateusz Morawiecki writing on Facebook: "The border of the Polish state is not just a line on the map. This border is something sacred for which the blood of a generation of Poles has been shed!”

Since the summer, Poland has been under increasing pressure of migrants from the Middle East and Africa trying to cross into the EU. Poland has sought to block the attempts or send those they catch back into Belarus.

Warsaw and the EU say it’s an organized action by the Belarusian government aimed at destabilizing the bloc in retaliation for Western sanctions.

Poland’s Border Guard has reported incidents of hostile behavior and threats by Belarusian forces directed across the border at Polish forces. Belarus, in turn, has repeatedly accused Poland of abusing the migrants at the border.

Belarus’ State Border Guard Committee confirmed to the Belarusian branch of Russia’s state-funded news outlet Sputnik on Monday that a group of migrants was indeed heading toward the Polish border on Monday.

Committee spokesperson Anton Bychkovsky said in a statement sent to The Associated Press (AP) that the migrants at the border between Belarus and Poland are seeking to "exercise their right to apply for a refugee status in the EU.” Bychkovsky insisted they "are not a security threat” and "are not behaving aggressively.”

Bychkovsky added that, according to the refugees, they gathered into such a large group in order to avoid "forcible ousting by the Polish side.”

Belarus’ opposition leader in exile, Sviatlana Tsikhanouskaya, said in a statement Monday that the Belarusian regime "has carried out an unprecedented international provocation, throwing out hundreds of people that entrusted their fates to it on the border with Poland.”

"Lukashenko bears complete personal responsibility for these attacks on Poland, Lithuania and the EU,” Tsikhanouskaya said. "This is an attempt at revenge against democratic countries over their support of the Belarusian people.”