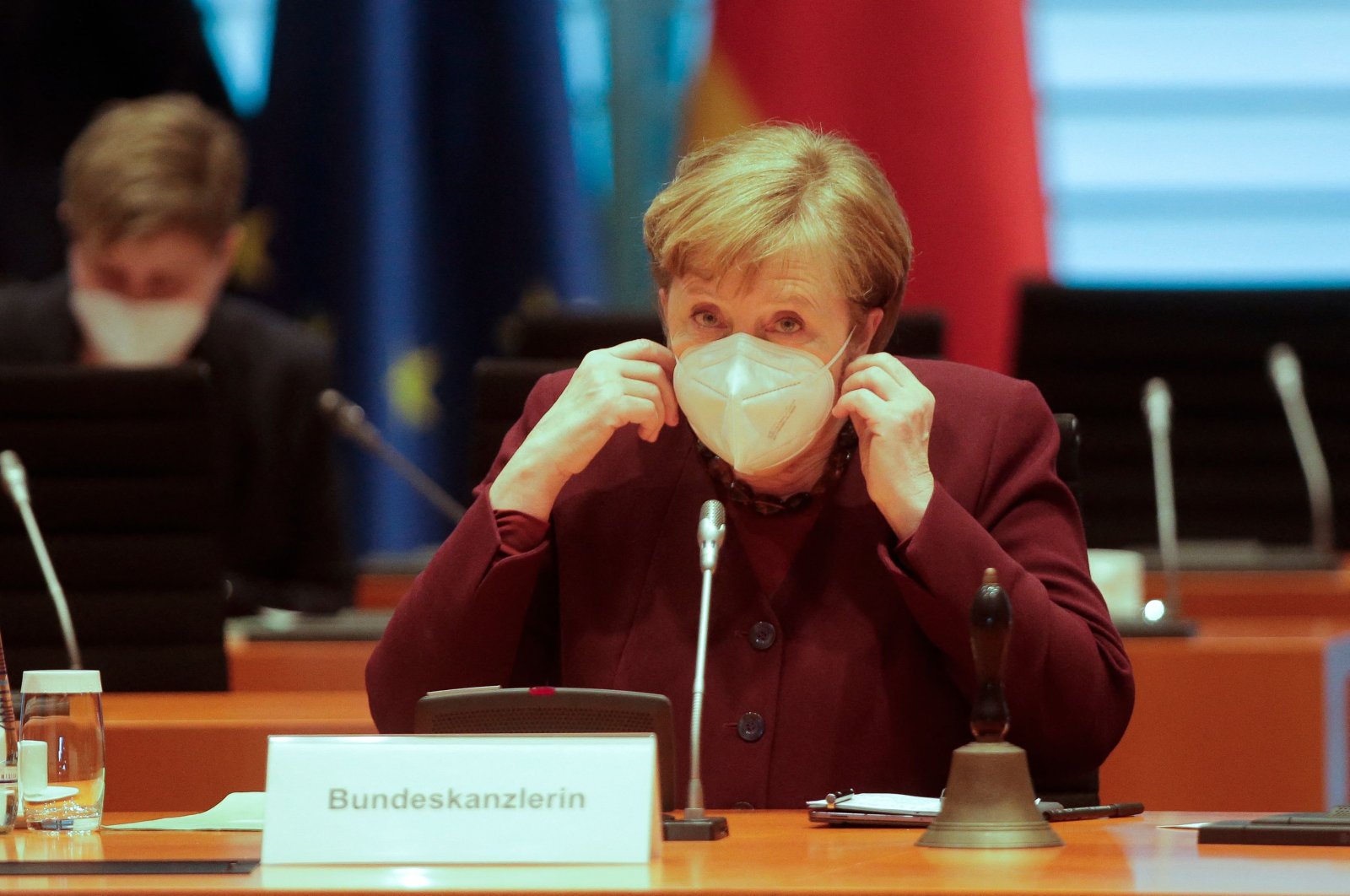 German Chancellor Angela Merkel wears a mask as she arrives for the weekly Cabinet meeting at the Chancellery in Berlin, March 10, 2021. (AFP Photo)
by Agencies Mar 14, 2021 10:29 am

Germany's longtime chancellor Merkel is facing a tough challenge in the local elections, especially after a corruption scandal that shook the conservatives

Polling stations have opened in the southwestern German states of Baden Wuerttemberg and Rhineland-Palatinate for two regional elections that could help to determine who will be Chancellor Angela Merkel's successor later this year.

Elections in these two German states on Sunday pose a difficult test for Merkel's party, six months before the national vote.

The center-left Social Democrats (SPD) have been gaining ground in the Rhineland-Palatinate, raising the prospects of the state's popular SPD premier, Malu Dreyer, returning to power as head of a three-party coalition.

Those ballots kick off an electoral marathon this year, which features six state elections and culminates in the Sept. 26 vote for a new national parliament.

Polls point to weak results for Merkel's center-right Christian Democratic Union (CDU). Amid discontent over a sluggish start to Germany’s vaccination drive and with coronavirus restrictions easing only gradually, Merkel’s Union bloc has been hit over the past two weeks by allegations that two lawmakers profited from deals to procure masks early in the coronavirus pandemic.

Recent surveys have shown that support for Merkel's CDU/CSU alliance has fallen to a one-year low at around 30% as Germans sour on its coronavirus crisis management.

Merkel's center-right CDU and its Bavarian CSU sister party have been roiled by damaging claims about MPs apparently profiting from face mask deals early on in the pandemic, forcing three lawmakers to step down in recent days.

Deepening the conservatives' woes is growing public anger about a sluggish and bureaucratic vaccination campaign, a delayed start to free rapid testing and stubbornly high infection rates despite months of shutdowns.

Germans could perhaps look past the "mask affair," Der Spiegel weekly wrote, "if citizens felt that the government was doing its job, protecting it from the virus and guiding it through the crisis. But it's not."

In Baden-Wuerttemberg, Germany's only Green party governor, Winfried Kretschmann, has become popular with centrist voters in 10 years running a region that is home to automakers Daimler and Porsche. The region was long dominated by the CDU until Kretschmann won power shortly after Japan's 2011 Fukushima reactor disaster, which accelerated the end of nuclear power in Germany.

Kretschmann, 72, a fatherly figure with a conservative image, features on Green election posters with the slogan “You know me.” That is a slogan that Merkel famously once used in a pre-election debate to underline her own largely ideology-free appeal.

In Baden-Wuerttemberg's last election in 2016, the Greens overtook the CDU to become the strongest party in the state. Polls suggest they can hope to widen their lead Sunday.

That would be a hopeful signal for the national election campaign, in which the traditionally left-leaning environmentalist party is expected to make its first bid for the chancellery. Merkel isn't seeking a fifth term after nearly 16 years in power.

About 7.7 million people are eligible to vote in Baden-Wuerttemberg and some 3.1 million in Rhineland-Palatinate. The center-left Social Democrats have led that region for 30 years – currently under Governor Malu Dreyer, whose personal popularity has kept her party’s support above its dismal national ratings. Dreyer is the favorite this time, though in a close race.

It's an awkward moment for new CDU leader Armin Laschet to face his first major test since being elected in January. Laschet has sought to preempt any fallout, saying that state elections “always have their very own character” and the outcome won't affect the stability of his leadership. However, bad results may raise questions over his hopes of running to succeed Merkel in September.

Many people had already voted by mail, so it’s unclear how far the scandal – over lawmakers in the CDU and its Bavaria-only sister party, the Christian Social Union, allegedly enriching themselves through mask deals – will impact Sunday’s vote. Nikolas Loebel, a CDU lawmaker from Baden-Wuerttemberg, and the CSU’s Georg Nuesslein have both quit their parties and say they won’t run for parliament again.

Some German commentators have called the mask scandal the conservatives' "biggest crisis" since a slush-fund controversy in the 1990s ensnared former Chancellor Helmut Kohl.

New CDU chief Armin Laschet has sharply criticized the MPs caught up in the row, joining a chorus of condemnation from across the political spectrum.

To stop the bleed ahead of Sunday's votes, the CDU/CSU gave all of its lawmakers until Friday evening to declare any financial benefits gained from the pandemic.

CSU lawmakers Georg Nusslein and CDU lawmaker Nikolas Loebel already resigned last week on allegations they pocketed hundreds of thousands of euros for acting as middlemen in the contracts.

CDU lawmaker Mark Hauptmann stepped down after media reports accused him of lobbying for foreign governments, including Azerbaijan, and promoting over-priced masks. He denies receiving any payments.

The Union bloc of CDU and CSU benefited from Merkel’s perceived good management of the pandemic over the past year. It still leads national polls by a distance, but this year has started badly. Germany’s vaccination campaign has been significantly slower than those of Israel, Britain and the U.S.

Laschet says that he and Markus Soeder, the CSU leader and Bavarian governor who is the other serious contender to run for chancellor, will decide on the center-right candidate to succeed Merkel in April or May. Soeder has gained stature during the pandemic.

It all marks a stunning reversal of fortune for veteran Chancellor Merkel.

Her coalition government made up of the CDU/CSU and junior coalition partner the SPD initially won praise at home and abroad for taming the first COVID-19 wave last spring, when Germans rallied behind trained scientist Merkel's virus measures.

But a resurgence in cases at the end of 2020 proved harder to suppress, and Germany's 16 federal states have increasingly gone their own way on school and shop reopenings, leading to a patchwork of rules.

Much of the blame for the disappointing vaccine pace and rapid test rollout has fallen on Health Minister Jens Spahn, once seen as a potential contender for Merkel's job.

Merkel herself has also come under fire, with observers saying the pandemic missteps risk tarnishing her legacy.

"Crises were always her greatest hour," said Spiegel. "This time, she doesn't appear to have the situation under control."