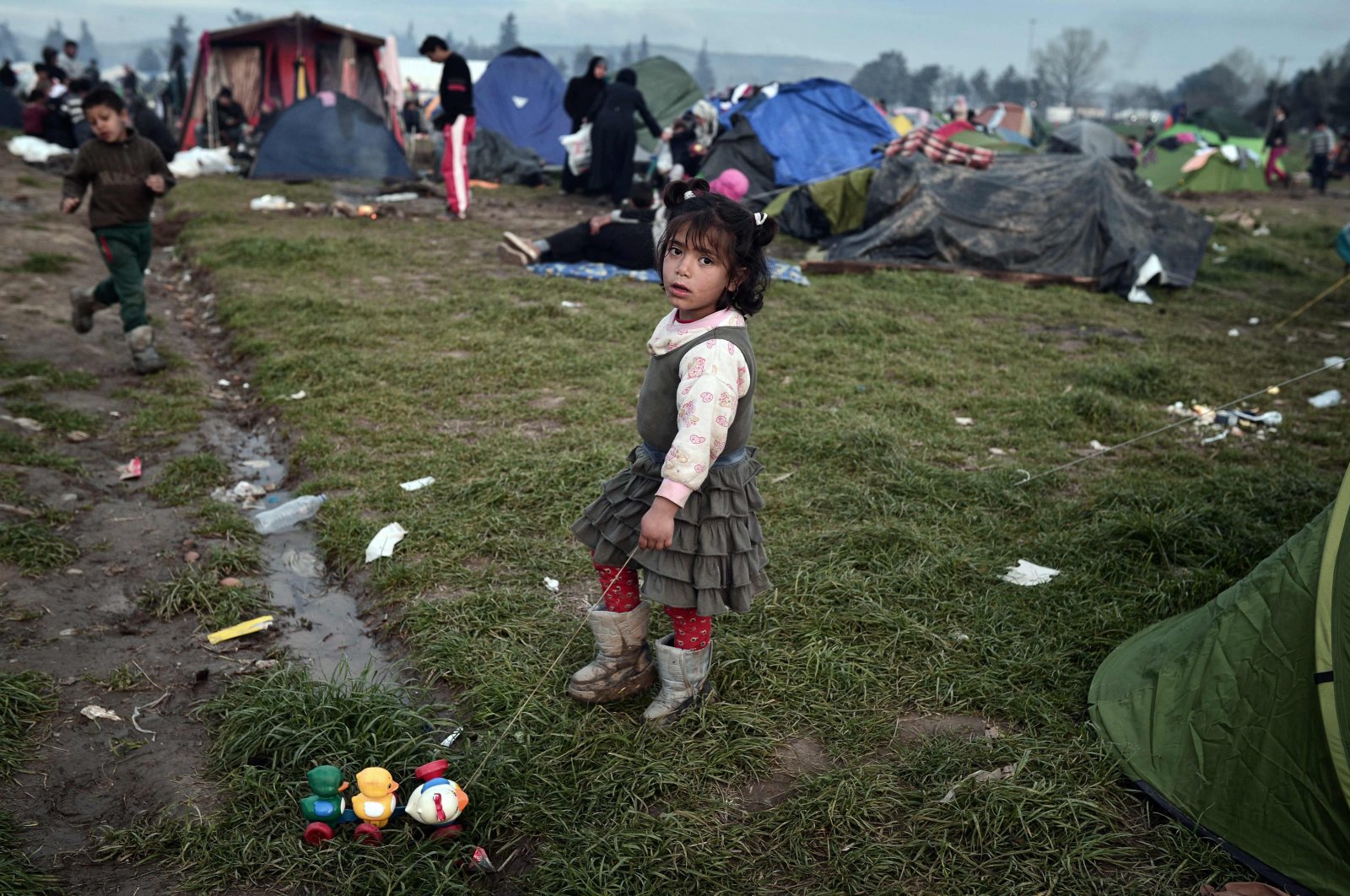 A child plays at a makeshift camp at the Greek-Macedonian borders, where the "Balkan route" once carried thousands of refugees to Europe, near the village of Idomeni, Greece, March 8, 2016. (AFP)
by French Press Agency - AFP Oct 21, 2021 9:31 am
RECOMMENDED

Largely from Afghanistan, many of them have endured months or years of flight from war and poverty, only to be met by Croatian police clubs and pointed guns at the gates to EU territory.

At a ramshackle camp near the northwest Bosnian border town of Velika Kladusa, a group of mostly Afghans is hoping to cross into the EU. Some have been on the road for years and others left as the Taliban overthrew the Western-backed government in August.

Although migrants have long complained of police violence at EU borders, a new investigation by major European media outlets this month uncovered alleged systematic targeting of refugees by special units in Croatia, Greece and Romania.

Zagreb later confirmed its police were at fault – the first such admission following years of denials. Greece said only that it was investigating the allegations.

Amir Ali Mirzai – who left Afghanistan three months ago – said he was attacked and robbed during an attempt to enter Croatia.

"I had 400 euros ($464) that police took, as well as my mobile," said Mirzai, who was traveling with his family, including a five-month-old baby.

Even with the threat of violence, Rasool and others still plan to take their chances.

"We prefer the deep woods and possible encounters with dangerous animals," he said, accusing police of being "more dangerous." He once met a bear on one trek through the borderlands.

Croatia and Bosnia-Herzegovina lie along the so-called Balkans route, which has been plied by hundreds of thousands of people from the Middle East and Asia in their quest for a new life in Western Europe.

The route was officially closed when the EU and Turkey signed a deal in 2016 to control border crossings following the 2015 spike in arrivals.

This month's investigation, which was conducted by outlets such as Germany's Der Spiegel and French newspaper Liberation, unearthed video footage showing men in balaclavas and unmarked uniforms assaulting migrants before pushing them back into Bosnia-Herzegovina.

"Any such practices are illegal and that national authorities have the responsibility to investigate," European Commission spokesman Adalbert Jahnz said in response.

But critics say Brussels has a vested interest in conditions at the border being as hostile as possible.

"The influx of migrants does not suit Europe and less of them will come if the deterrent is more violent," Croatian political commentator Jasmin Klaric told AFP.

Since June 2019, more than 30,000 people, largely men from Afghanistan, Bangladesh and Pakistan have been prevented from crossing into Croatia from Bosnia-Herzegovina, according to the Danish Refugee Council.

Thousands are believed to have entered Croatia through a narrow corridor with Bosnia-Herzegovina of dense forests and swollen rivers, with the aim of heading further north into the EU.

While Croatia has acknowledged that its police were at fault, it insists the recent violence was an isolated case.

But activists say police violence has steadily increased over the years since the Balkans route officially closed in 2016, with authorities using force as a deterrent.

The controversy comes as Croatia sets its sights on joining the Schengen passport-free zone by 2024 on the condition that Zagreb can secure its borders.

"Brussels and some countries act hypocritically," wrote the Croatian daily Vecernji List in a recent editorial. "They condemn violence but will not open their doors to migrants and will insist that external countries, Croatia included, not let them enter 'fortress Europe.'"

With the weather changing, Afghan migrant Zahir Panahi is preparing for what would be the family's 29th attempt to enter the EU.

"It's getting really cold here," he said.