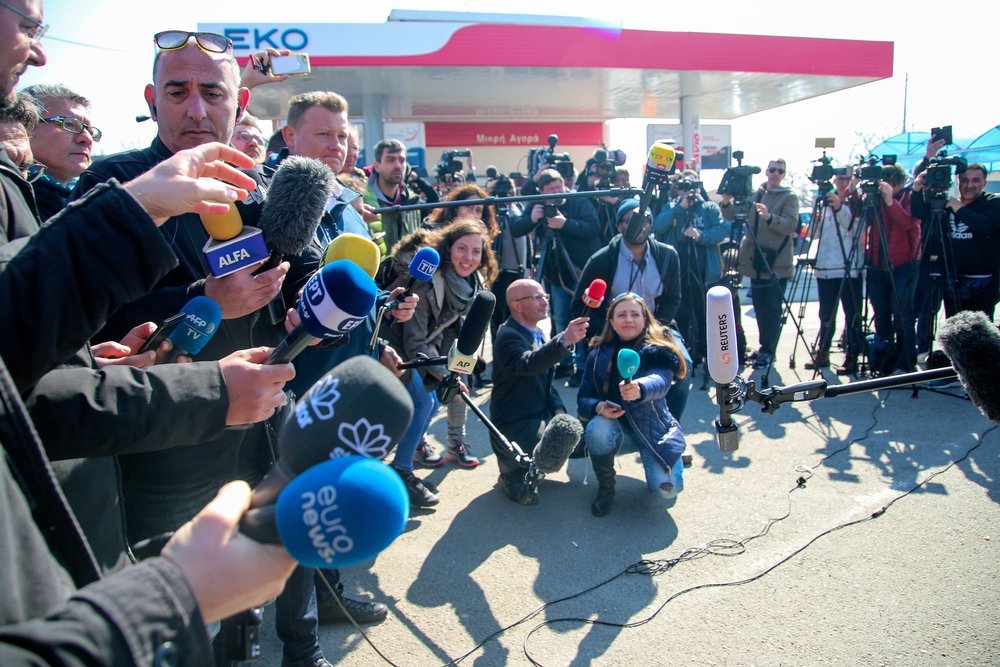 Journalists, television crews and photojournalists from all over the world gather at the Greek-Turkish border to cover the refugee crisis, Kastanies, Evros, Greece, March 1, 2020. (Shutterstock Photo)
by Daily Sabah with AFP Apr 20, 2021 3:24 pm
RECOMMENDED

The annual report by Reporters Without Borders (RSF) expressed concerns Tuesday over the "problematic" situation for reporters in Greece as the media watchdog published its World Press Freedom Index, in which the European Union nation plummeted five places.

In the report, which ranks 180 countries in the world from “good” to “very bad” according to their level of media freedom, Greece has been placed at 70, down from 65 in 2020. Its rating considered as “problematic.”

The significant decline stems from growing concerns over the case of Giorgos Karaivaz, a Greek crime reporter working for the private television station Star TV, who was shot outside his home while returning from work in southern Athens two weeks ago.

Although it is unknown whether his death was related to his work, European Commission President Ursula von der Leyen, called the murder a “despicable, cowardly act” in a tweet, adding, “Europe stands for freedom. And freedom of the press may be the most sacred of all.”

Last year, there were several reports of police harassment of journalists while covering protests in isolation. In February, France-based RSF called for a probe after seven journalists were exposed to tear gas and beaten with truncheons and shields during a demonstration. RSF called that incident an “unprovoked attack by the police.”

Journalists interacting with government officials have also reported serious concerns, with Greek journalist Dimitra Kroustalli saying in January she had been forced to quit from To Vima newspaper after “strangling pressure” from the Greek prime minister’s cabinet amid her criticism toward systems used to track and monitor COVID-19 cases.

Stavros Malichoudis, a freelance journalist based in the Greek capital of Athens, said the recent murder of a media worker has once again brought attention to press freedom in Greece.

“Until Karaivaz’s murder, Greece wasn’t considered as a country where journalists might be killed for doing their job. Press freedom, though, definitely has been an issue,” Malichudis told news outlet Al-Jazeera. “The coverage of public TV has always been in favor of the government, instead of the public it ought to serve. Journalists working for major media know there are specific topics they can’t even pitch a story about and large corporations seldom get covered in the press where only their adverts appear."

“Another issue is the restriction of coverage on refugees by the Greek government, which has already been criticized by media watchdogs," Malichudis added.

World Press Freedom Index also found 73 countries "totally blocked or seriously impeded" journalism, while it was "constrained" in 59 others, adding that many governments had used the pandemic to worsen repression.

"Journalism is the best vaccine against disinformation," RFS Secretary-General Christophe Deloire said in a statement. "Unfortunately, its production and distribution are too often blocked by political, economic, technological and, sometimes, even cultural factors."

The Middle East and North Africa region continue to be the most repressive for journalists, the report found, highlighting the worsening situation in Iran, Saudi Arabia, Egypt and Syria over the past year.

"In this region, still the toughest and most dangerous for journalists, the pandemic has exacerbated the problems that have long plagued the press, which was already in its death throes," it said.

Malaysia recorded the worst deterioration, down 18 places in the ranking to 119, due in part to a recent "anti-fake news" law "allowing the government to impose its own version of the truth."

RFS said the global level of media freedom remained largely stable overall for the past year, but noted that the figures had deteriorated by 12% since the ranking was first launched in 2013. Part of the problem is falling trust in journalists, fuelled by political polarisation and online misinformation.

RFS noted a recent survey by the Edelman Trust that found 59% of respondents across 28 countries believed journalists deliberately misled the public.

The World Press Freedom Index is based on questionnaires sent to experts around the world, combined with data on abuse and acts of violence against journalists to form a picture that includes pluralism, media independence, self-censorship and other factors.