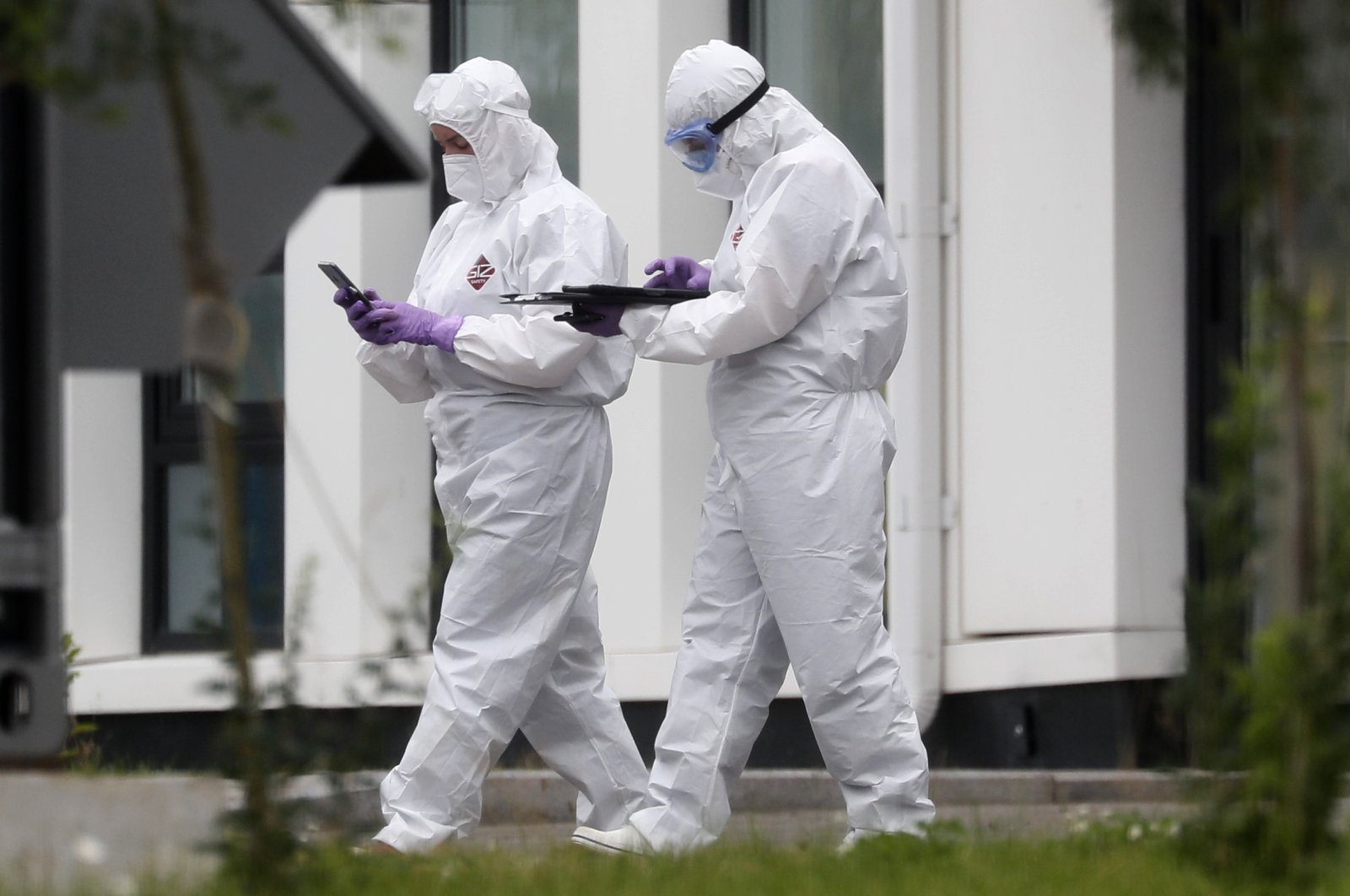 Medical specialists in protective suits wait for patients at the hospital complex for patients with the COVID-19 disease in the Kommunarka settlement in New Moscow, Russia, July 14, 2020. ( EPA-EFE Photo)
by ASSOCIATED PRESS Jul 29, 2020 11:43 am
RECOMMENDED

Russian intelligence services are using a trio of English-language websites to spread disinformation about the coronavirus pandemic, seeking to exploit a crisis that America is struggling to contain ahead of the presidential election in November, United States officials said Tuesday.

Two Russians who have held senior roles in Moscow’s military intelligence service known as the GRU have been identified as responsible for a disinformation effort meant to reach American and Western audiences, U.S. government officials said. They spoke to The Associated Press on condition of anonymity because they were not authorized to speak publicly.

The information had previously been classified, but officials said it had been downgraded so they could more freely discuss it. Officials said they were doing so now to sound the alarm about the particular websites and to expose what they say is a clear link between the sites and Russian intelligence.

Between late May and early July, one of the officials said, the websites singled out Tuesday published about 150 articles about the pandemic response, including coverage aimed either at propping up Russia or denigrating the U.S.

Among the headlines that caught the attention of U.S. officials were “Russia’s Counter COVID-19 Aid to America Advances Case for Détente,” which suggested that Russia had given urgent and substantial aid to the U.S. to fight the pandemic, and “Beijing Believes COVID-19 is a Biological Weapon,” which amplified statements by the Chinese.

The disclosure comes as the spread of disinformation, including by Russia, is an urgent concern heading into November’s presidential election as U.S. officials look to avoid a repeat of the 2016 contest, when a Russian troll farm launched a covert social media campaign to divide American public opinion and to favor then-candidate Donald Trump over Democratic opponent Hillary Clinton. The U.S. government’s chief counterintelligence executive warned in a rare public statement Friday about Russia’s continued use of internet trolls to advance their goals.

Even apart from politics, the twin crises buffeting the country and much of the world – the pandemic and race relations and protests – have offered fertile territory for misinformation or outfight falsehoods. Trump himself has come under scrutiny for sharing misinformation about a disproven drug for treating the coronavirus in videos that were taken down by Twitter and Facebook.

Officials described the Russian disinformation as part of an ongoing and persistent effort to advance false narratives and cause confusion.

They did not say whether the effort behind these particular websites was directly related to the November election, though some of the coverage appeared to denigrate Trump’s Democratic challenger, Joe Biden, and called to mind Russian efforts in 2016 to exacerbate race relations in America and drive corruption allegations against U.S. political figures.

Though U.S. officials have warned before about the spread of disinformation tied to the pandemic, they went further on Tuesday by singling out a particular information agency that is registered in Russia, InfoRos, and that operates a series of websites – InfoRos.ru, Infobrics.org and OneWorld.press – that have leveraged the pandemic to promote anti-Western objectives and to spread disinformation.

Officials say the sites promote their narratives in a sophisticated but insidious effort that they liken to money laundering, where stories in well-written English – and often with pro-Russian sentiment – are cycled through other news sources to conceal their origin and enhance the legitimacy of the information.

An email to InfoRos was not immediately returned Tuesday.

Beyond the coronavirus, there’s also a focus on U.S. news, global politics and topical stories of the moment.

A headline Tuesday on InfoRos.ru about the unrest roiling American cities read “Chaos in the Blue Cities,” accompanying a story that lamented how New Yorkers who grew up under the tough-on-crime approach of former Mayors Rudy Giuliani and Michael Bloomberg “and have zero street smarts” must now “adapt to life in high-crime urban areas.”

Another story carried the headline of “Ukrainian Trap for Biden,” and claimed that “Ukrainegate” – a reference to stories surrounding Biden’s son Hunter’s former ties to a Ukraine gas company – “keeps unfolding with renewed vigor.”

U.S. officials have identified two of the people believed to be behind the sites’ operations. The men, Denis Valeryevich Tyurin and Aleksandr Gennadyevich Starunskiy, have previously held leadership roles at InfoRos but have also served in a GRU unit specializing in military psychological intelligence and maintain deep contacts there, the officials said.

InfoRos and One World’s ties to the Russian state have attracted scrutiny in the past from European disinformation analysts.

One World posted a response Wednesday, denouncing as "categorically false” allegations that it worked for the Russian military intelligence service or was involved in propaganda or meddling.

Kremlin spokesman Dmitry Peskov called the allegations "some kind of a persistent phobia.”

"Russian media actively work to cover the situation with the coronavirus. Indeed, when it comes to Russia, it is going through this difficult time better than many other countries, albeit not without problems. Indeed, all the media point to considerable problems that the United States are experiencing during this period," Peskov told reporters.

"So in this case if anyone talks about some kind of disinformation, it is some kind of persistent phobia, and there is no need to blame objective and quality work of the media,” the official said.

Lawmaker Konstantin Kosachev, head of the foreign affairs committee in the upper house of the Russian parliament, said that the accusations are either "new conspiracy theories” invented by journalists or "yet another hoax of American security services.”

Kosachev added that "so far none of the conspiracy theories” aired in Western media "has been confirmed in real life.”

In 2019, a European Union task force that studies disinformation campaigns identified One World as “a new addition to the pantheon of Moscow-based disinformation outlets.” The task force noted that One World’s content often parrots the Russian state agenda on issues including the war in Syria.

“InfoRos is evolving in a shady grey zone, where regular information activities are mixed with more controversial actions that could be quite possibly linked to the Russian state’s information operations,” the report’s authors concluded.

On its English-language Facebook page, InfoRos describes itself as an “Information agency: world through the eyes of Russia.”