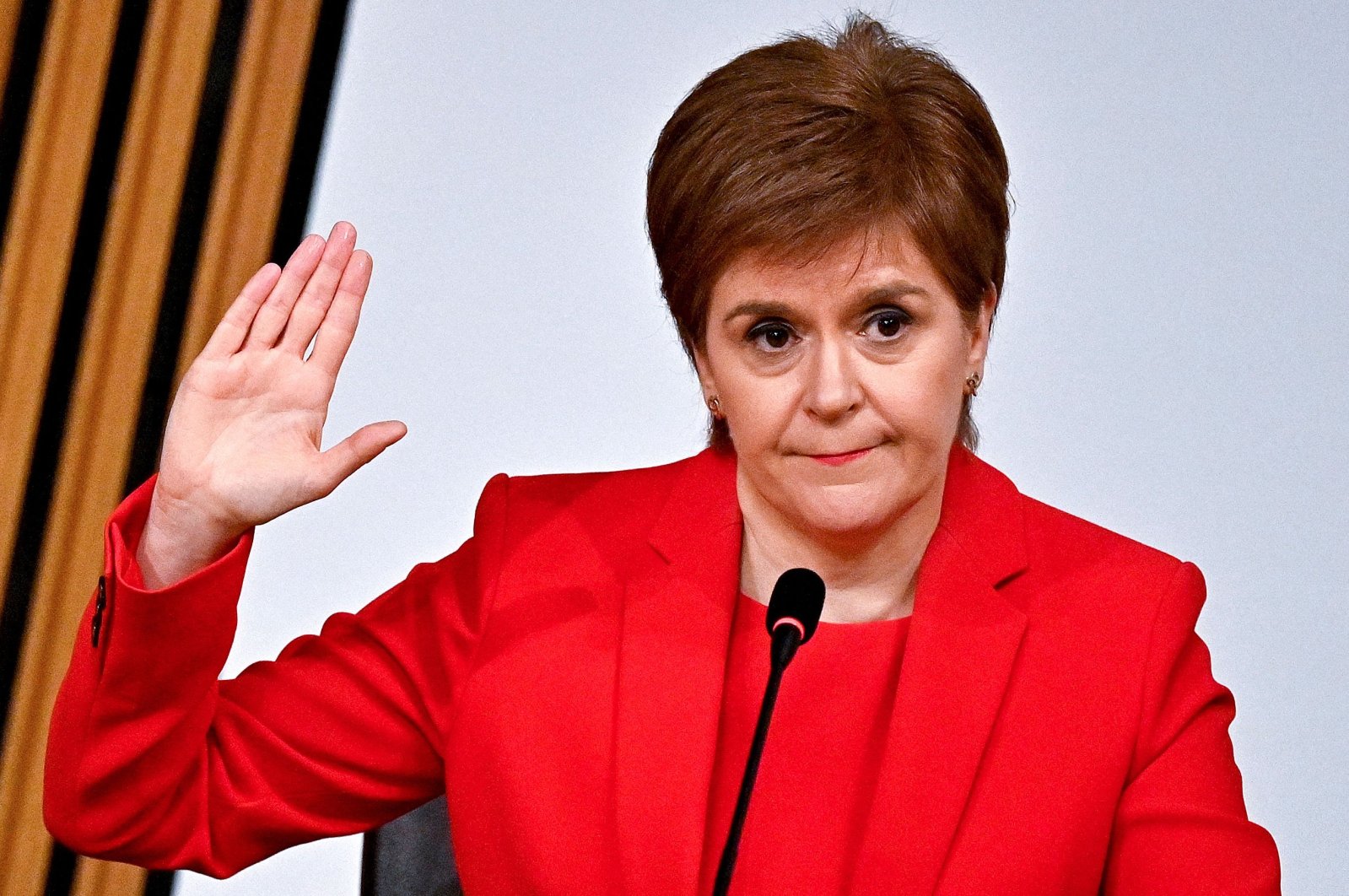 Scotland's First Minister Nicola Sturgeon is sworn in before giving evidence to The Committee on the Scottish Government Handling of Harassment Complaints at Holyrood in Edinburgh, examining the government's handling of harassment allegations against Former Scottish National Party leader and former First Minister of Scotland, Alex Salmond on March 3, 2021. (AFP Photo)
by ASSOCIATED PRESS
Mar 03, 2021 4:37 pm

Scottish First Minister Nicola Sturgeon on Wednesday strongly denied being part of a plot against her predecessor, as she testified under oath Wednesday in a political saga that is threatening both her leadership and her push for Scottish independence.

Sturgeon defended the way her government handled sexual assault claims against former First Minister Alex Salmond, saying the #MeToo movement had made it clear that abuse allegations about powerful people must not be "ignored or swept under the carpet.” Sturgeon was giving her side of the story to a committee of lawmakers probing a political and personal feud that is wracking Scotland’s pro-independence movement and the governing Scottish National Party (SNP).

Its antagonists are Salmond and Sturgeon, two former allies and friends who have dominated Scottish politics for decades. Salmond was tried and acquitted last year on sexual assault charges and claims the misconduct allegations brought by several women were part of a conspiracy to wreck his political career. He accuses Sturgeon of lying about when she learned of the allegations and breaking the code of conduct for government ministers.

He alleges her administration undermined democratic principles and the rule of law by allowing the distinctions between government, party and civil service to become blurred. Scotland’s highest civil court ruled in 2019 that the way the Scottish government had handled the misconduct allegations was unlawful and "tainted by apparent bias,” and awarded Salmond 500,000 pounds ($695,000) in expenses. Sturgeon told a Scottish Parliament inquiry into the handling of the complaints that no one had "acted with malice or as part of a plot against Alex Salmond.”

"A number of women made serious complaints about Alex Salmond’s behavior,” she said. "The government, despite the mistakes it undoubtedly made, tried to do the right thing. As first minister I refused to follow the age-old pattern of allowing a powerful man to use his status and connections to get what he wants.”

The opposition Scottish Conservatives have demanded Sturgeon resign, but she said she had acted properly. Sturgeon defended not reporting to civil servants a meeting and a call with Salmond in 2018 about the complaints, saying it was because she did not want to influence the investigation. She denied leaking the complainants’ names, and said she refused a request by Salmond to intervene on his behalf because that would have been "a heinous, egregious breach of my position.”

Salmond, who led the SNP for two decades and was first minister between 2007 and 2014, built the separatist party into a major political force and took Scotland to the brink of independence by holding a 2014 referendum. He stepped down as the first minister after the "remain” side won, and Sturgeon, his friend and deputy, replaced him. In 2019, Salmond was charged with sexual assault and attempted rape after allegations by nine women who had worked with him as the first minister or for the party. Salmond called the charges "deliberate fabrications for a political purpose,” and was acquitted after a trial in March 2020. Salmond has called the last few years a "nightmare.”

Sturgeon expressed sympathy for her former friend, but said she had searched in vain during his testimony last week for "any sign at all that he recognized how difficult this has been for others, too.”

"That he was acquitted by a jury of criminal conduct is beyond question,” she said. "But I know just from what he told me, that his behavior was not always appropriate. And yet across six hours of testimony, there was not a single word of regret, reflection or even simple acknowledgment of that."

The political soap opera in Edinburgh could have major implications for the future of Scotland and the U.K. Scottish voters rejected independence in the 2014 referendum, which was billed at the time as a once-in-a-generation decision. But the SNP says Brexit has fundamentally changed the situation by dragging Scotland out of the European Union even though a majority of Scottish voters in the U.K.’s 2016 EU membership referendum opted to remain in the EU.

The U.K. as a whole voted narrowly to leave the bloc and finalized the break on Jan. 1. An election for the Scottish Parliament is due in May, and the SNP has a strong lead in opinion polls. Sturgeon says if she wins a majority, she will push for a new independence referendum and challenge British Prime Minister Boris Johnson in the courts if his government refuses to agree. John Curtice, professor of politics at the University of Strathclyde, said the damaging saga could hurt the SNP’s electoral chances.

"(The possibility) is that sufficient people, as they see the drama on the accusations played out between Mr. Salmond and Ms. Sturgeon, that some say ‘Well hang on, is this really a country that can govern itself, or at least is this a party that I want us to take us on the road to independence?’” he said.