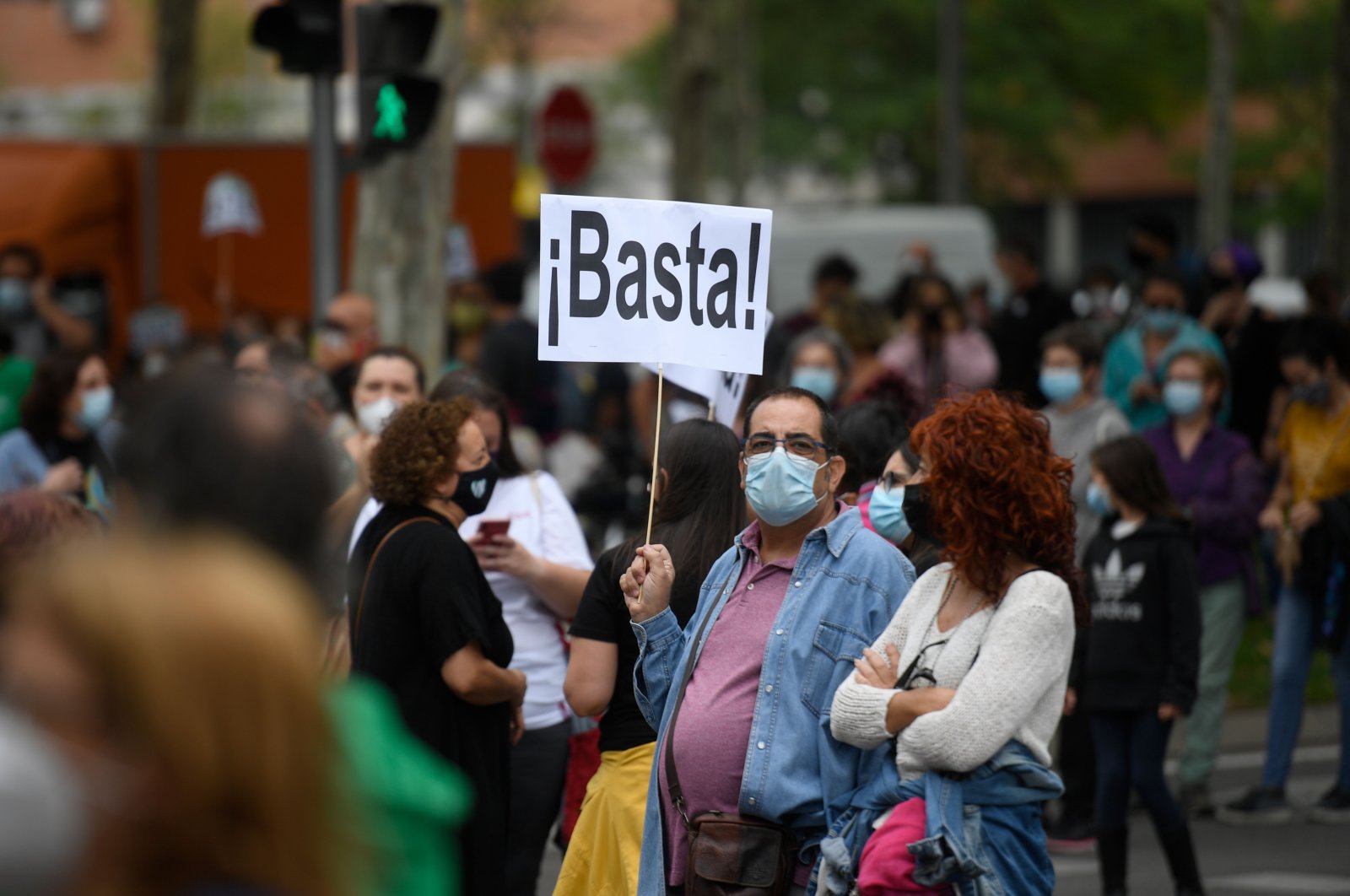 A man holds a placrad reading "Enough" during a demonstration at the Vallecas neighborhood in Madrid, on September 20, 2020, to protest against the new restrictive measures announced by regional authorities. (AFP Photo)
by REUTERS Sep 20, 2020 5:52 pm
RECOMMENDED

Protesters in poorer areas of Madrid took to the streets Sunday to call for better health provisions, complaining of discrimination by the authorities in the face of lockdown measures aimed at combating the country's rising COVID-19 infection rate.

Madrid's regional government Friday ordered a lockdown from Monday in some of the poorer areas of the city and its outskirts that are home to about 850,000 people after a surge in coronavirus cases there.

The lockdown measures predominantly apply to areas inhabited by lower-income households and migrant populations. Peaceful protests were held in 12 of the 37 districts affected Sunday.

About 600 people demonstrated in the southern district of Vallecas, which has one of the highest infection rates in the Spanish capital – about six times higher than that of Chamberi, a wealthy area in the north of the city, according to regional government figures.

Tensions rose as protesters at one stage threatened to gain access to the regional government building.

"It is illogical that you can go and do things in wealthier areas, but you cannot do the same in Vallecas. There is the same risk of contagion. They are discriminating," said Begona Ramos, 56, a protester, who is self-employed and lives in Vallecas.

Demonstrators chanted, "Vallecas is not a ghetto".

They also called for the resignation of Madrid regional leader Isabel Diaz Ayuso, who attracted criticism for saying this week that "the way of life of immigrants" was partly to blame for the rise in cases.

Madrid mayor Jose Luis Martínez-Almeida said the measures did not discriminate against the poor.

Authorities in Madrid, which accounts for a third of all infections in Spain, announced the restrictions in areas where the contagion levels exceed 1,000 per 100,000 inhabitants.

In those areas access to parks and public areas will be restricted, gatherings will be limited to six people, and commercial establishments will have to close by 10 p.m.

Police will set up 60 checkpoints to enforce the measures, but will not impose fines on the first day, regional authorities said on Sunday.

"We are clear that these are the areas with the highest level of infection. To call protests right now when what we want is to avoid this seems absolutely irresponsible," he told Cadena Ser radio.

However, Madrid regional health chief Enrique Ruiz Escudero said if these measures did not reduce coronavirus cases, a city-wide lockdown could follow.

"If it is necessary to shut down Madrid, we will do it," he said in an interview with ABC newspaper published on Sunday.

Spain has the highest number of COVID-19 cases in western Europe, but Spanish Prime Minister Pedro Sanchez ruled out a second national lockdown in an interview with La Sexta TV Saturday.