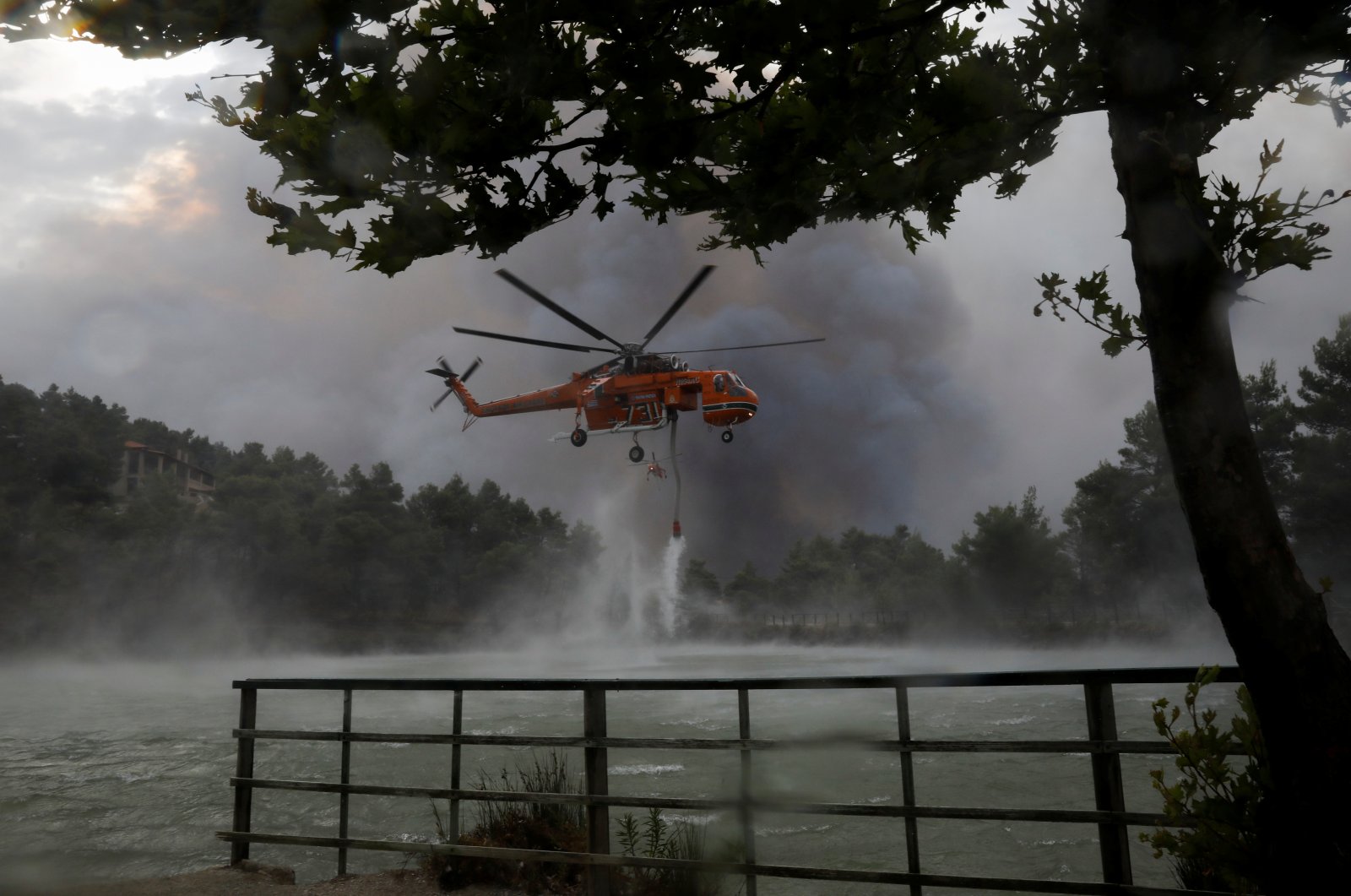 A firefighting helicopter is filled with water from Beletsi Lake as a wildfire erupts near the village of Ippokratios Politia, north of Athens, Greece, Aug. 6, 2021. (Reuters Photo)
by ASSOCIATED PRESS Aug 06, 2021 11:47 am
RECOMMENDED

Thousands of people in Greece fled to safety from a wildfire north of Athens early Friday as firefighters waged an overnight battle to stop the flames from reaching populated areas, electricity installations and historic sites.

On the nearby island of Evia, the Greek coast guard mounted a massive operation with patrol boats and private vessels to evacuate hundreds of residents and vacationers by sea as dozens of fires burned across the country for a third day amid a protracted heat wave.

One of the most severe blazes tore through forest areas 20 kilometers (12.5 miles) north of the capital, destroying more homes. Ground crews of several hundred firefighters dug fire breaks and hosed the flames.

Traffic was halted on the country's main highway connecting Athens to northern Greece as crews tried to use the road as a firebreak before water-dropping planes resumed flights at first light. But sparks and burning pine cones carried the fire across the highway at several points.

Several firefighters and volunteers were hospitalized with burns, health officials said. Health Minister Vassilis Kikilias said nine people had been taken by ambulance to hospitals in Athens from the fire north of the Greek capital, three of them suffering breathing problems, while 11 more were being treated in a health center on Evia.

"We are going through the 10th day of a major heat wave affecting our entire country, the worst heat wave in terms of intensity and duration of the last 30 years,” Fire Service Brig. Gen. Aristotelis Papadopoulos said.

In the Drosopigi area north of Athens, resident Giorgos Hatzispiros went Friday morning to check on his house after being ordered to evacuate the previous afternoon. Only the charred walls of the single-story home remained, along with his two children's bicycles, somehow unscathed in a storeroom. Inside, smoke rose from a still-smoldering bookcase.

"Nothing is left,” Hatzispiros said. He urged his mother, who was accompanying him, to leave, to spare her the sight of their destroyed home. In southern Greece, nearly 60 villages and settlements were evacuated Thursday and early Friday, with weather conditions expected to worsen as strong winds were predicted in much of the country.

Fires were raging on the island of Evia, northeast of Athens, and at multiple locations in the southern Peloponnese region where a blaze was stopped before reaching monuments at Olympia, the birthplace of the ancient Olympic Games.

A summer palace outside Athens once used by the former Greek royal family was also spared. In Evia, the coast guard said its patrol boats, private vessels and tourist boats had evacuated 631 people overnight and by early Friday morning from beaches on the northeastern coast of the island.

Coast guard patrols were continuing along the coast. Fire crews, water-dropping planes, helicopters and vehicles from France, Romania, Sweden and Switzerland were arriving Friday and through the weekend to help.

"Our priority is always the protection of human life, followed by the protection of property, the natural environment and critical infrastructure. Unfortunately, under these circumstances, achieving all these aims at the same time is simply impossible,” Prime Minister Kyriakos Mitsotakis said in a televised address Thursday night. The wildfires, he said, display "the reality of climate change.”

More than 1,000 firefighters, joined by the army and teams of volunteers, as well as nearly 20 water-dropping planes and helicopters were fighting five major fires across the country, the fire department said. In 2018, more than 100 people died when a fast-moving forest fire engulfed a seaside settlement east of Athens.

Some of the casualties drowned trying to escape by sea from the choking smoke and flames after becoming trapped on a beach.