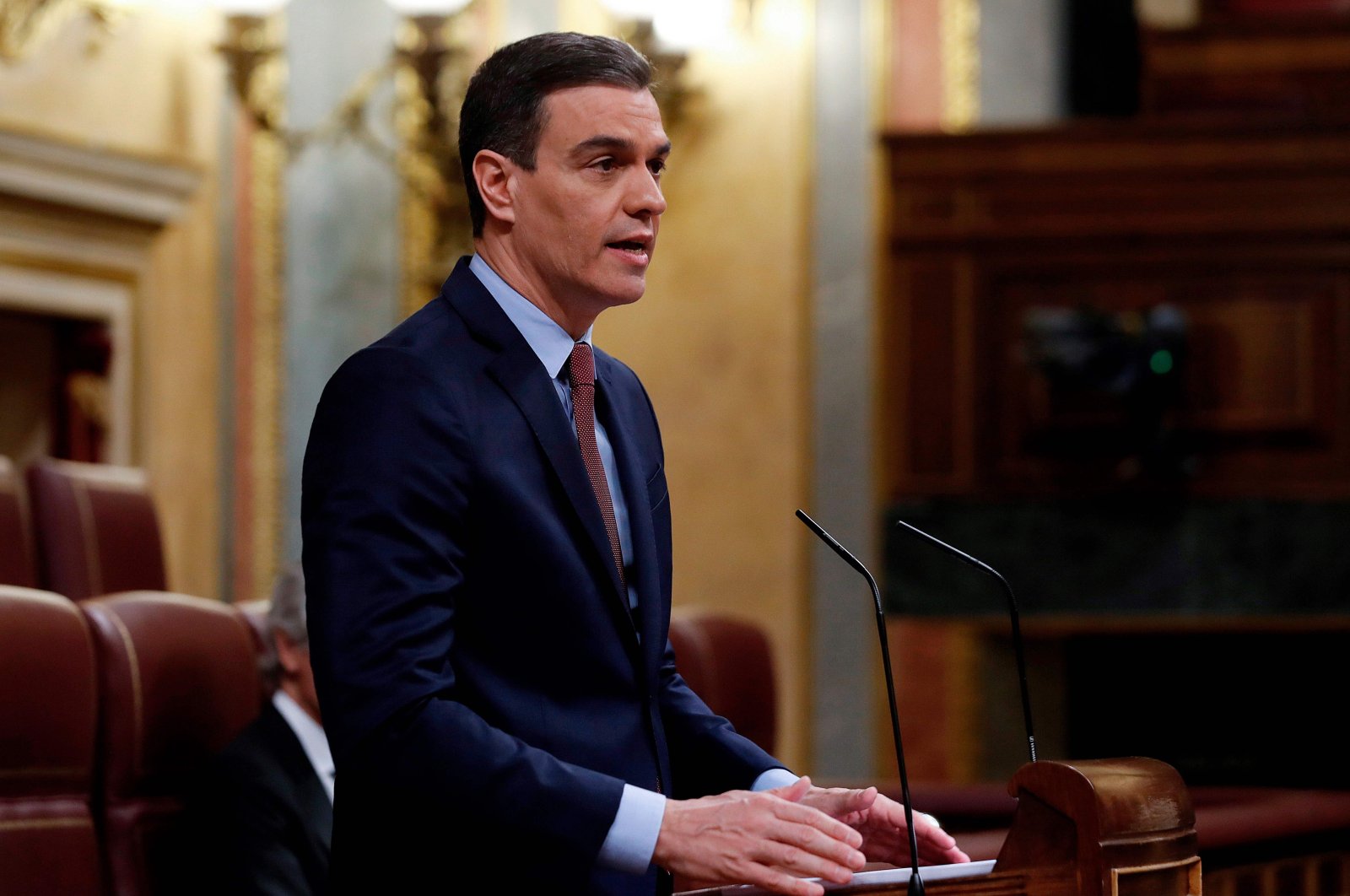 Spanish Prime Minister Pedro Sanchez delivers a speech during a session to debate the extension of a national lockdown to curb the spread of the coronavirus at the Lower Chamber of the Spanish parliament in Madrid, May 6, 2020. (AFP Photo)
by ASSOCIATED PRESS May 06, 2020 4:20 pm
RECOMMENDED

Spain’s left-wing coalition government appears to have averted throwing the country into a political crisis on top of the enormous challenge it already faces from a devastating coronavirus outbreak that has claimed more than 25,000 lives and severely damaged its economy.

Prime Minister Pedro Sánchez appeared before Spain's parliament on Wednesday to receive its endorsement for a fourth two-week extension to a state of emergency that he declared on March 14 when Spain’s decentralized health care system had lost control of the COVID-19 outbreak. The lockdown has succeeded in reducing the contagion rate from over 20% at the height of the crisis to under 1%.

"We have won a partial victory against the virus thanks to the sacrifice of all,” Sánchez said. "No one gets everything right in such an unprecedented situation but lifting the state of emergency now would be a complete error.”

Sánchez said that the state of emergency must stay in place to ensure that the country makes a coordinated and cautious return to a "new normalcy,” but he is poised to lose some key support from opposition parties who say he is abusing his extraordinary powers.

To compensate for losing the backing of the leading opposition party and angering Catalonia's separatists, the government had to strike last-minute deals with the center-right Citizens party and Basque regionalists to guarantee the parliamentary endorsement. The vote is scheduled for Wednesday evening.

The state of emergency is set to expire on Saturday. The extension will take it through May 24. The government argues the extension is critical to apply its complex rollback plan for the lockdown, which will vary by province as they prepare for a possible second wave.

The debate on Wednesday in the Madrid-based Congress that was limited in attendance to a few dozen members to limit risk of contagion was harsh.

The leading opposition party, Spain’s conservative Popular Party, which had supported the government until now, has said it will abstain while accusing Sánchez of violating citizens' constitutional rights by continuing to restrict free movement.

An important separatist party from northeast Catalonia went further, voting "No” and aligning itself with two other smaller Catalan separatist parties and their alter egos on the political spectrum: Spain’s ultra-nationalist, far-right Vox party, the third largest in the chamber.

The Catalan separatists demand that the government give back control of the health care system to the regions.

Vox blamed the government for the deaths of the virus.

"Maintaining the state of emergency won’t save lives or jobs. What will save lives is a change of government,” said Vox leader Santiago Abascal, adding that he will consider leading a no-confidence vote soon.

Sánchez was forced to call early elections last year when the Catalan separatists and parties of the right killed his attempt to pass a national budget. An inconclusive result to that April 2019 ballot led to another election in November and the eventual forging of a coalition of Sánchez's Socialists and the anti-austerity United We Can party. It took power in January just as the virus appears to have begun its spread in southern Europe.

Spain hasn't seen any public protests against the lockdown like in the United States. Overall, Spaniards have obeyed the strict stay-at-home rules that have only recently been loosened.

But even Sánchez’s allies warn him that as the strain on hospitals lifts and shops start to reopen, the government’s support is crumbling.

The deals with the Citizens party and the Basque Nationalist Party (PNV) came with promises by Sánchez to work more closely with the opposition parties and the regional administrations and to separate ambitious economic and social welfare aid packages from the state of emergency so they can remain place when it falls.

"Mr. President, use these next 15 days to get prepared,” PNV spokesman Aitor Esteban said. "Perhaps in all the phases of the rollback, we won’t need a state of emergency.”