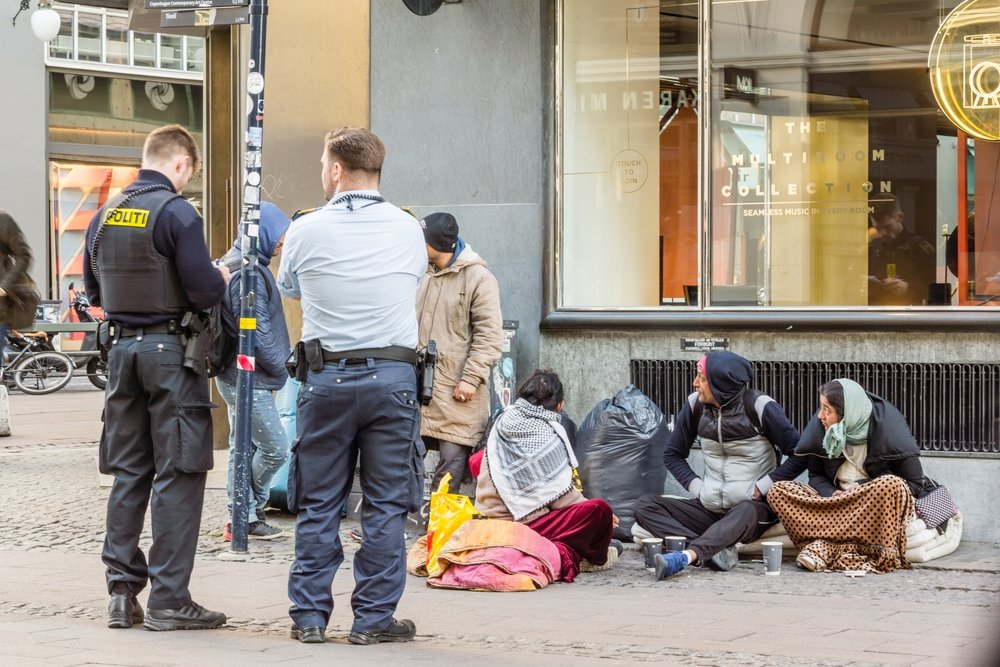 Two police officers look at the paperwork of immigrants who are sitting on the street, Copenhagen, Denmark, April 6, 2017. (Shutterstock Photo)
by DAILY SABAH WITH AGENCIES Apr 18, 2021 12:52 pm

Danish authorities are facing growing international criticism from the U.N. and human rights groups after the country stopped renewing Syrians' residency permits, arguing that it is safe to return to the war-torn country despite the U.N. contending otherwise

Denmark has become the first country in Europe to strip Syrian refugees of their residency as Danish authorities declared that Damascus and the surrounding areas were safe to return to and refused to renew the temporary residency status of dozens of Syrians.

The move has garnered widespread attention since 19-year-old Aya Abu-Daher of Nyborg appeared on television earlier this month in defense of her family's cause, winning the hearts of viewers when she held back tears and asked what she had “done wrong.”

“The Danish Refugee Council disagrees with the decision to deem the Damascus area or any area in Syria safe for refugees to return to – the absence of fighting in some areas does not mean that people can safely go back. Neither the U.N. nor other countries deem Damascus as safe.”

Rasha Kairout, who could be stripped of her residence permit and asylum status, took refuge in Denmark when the Syrian civil erupted. She took dangerous routes, first coming to Turkey and then traveling on rubber boats to cross into Europe.

"The journey was dangerous, but the fear of the Syrian regime was a lot bigger,” Kairout told Anadolu Agency (AA). "I am really desperate. After all I went through to reach this safe place, where I took a very dangerous boat and slept in the forests just to have a safe future for my children. But this is now on the verge of being taken away from me,” said the 38-year-old single mother of two teens.

Kairout came to Denmark in 2015 and for six years has lived in safety and security, making the Scandinavian nation home for herself and her two children – daughter Louseen, 15, and son Qusai, 13.

"Our life in Denmark faced a few problems at the start due to language difficulties, but we learned it. We are very well integrated and have friends,” she said. After working at a hotel for a year and a half, she lost her first job during the coronavirus pandemic but found another at an elderly care home. She is also studying. "There is a big difference between living here and living in Syria. We are living here in Denmark in freedom where we express freedom of opinion and enjoy democracy. And the most important thing is living in security and safety. This is contrary to the situation in Syria,” she said.

But on Feb. 10, she received an email from Danish immigration authorities informing her that her family's residency permits had been suspended because Damascus was now "safe," a response that shocked Kairout.

"They are saying Damascus is safe and halted my residence based on that,” said Kairout. "From the first day of my arrival in Denmark, I told them I fled from the Assad brutal regime ... this means, I will be arrested at the airport in Syria by that criminal regime, and me and my children will be dead.” She has applied for the decision to be reversed and is waiting for a court to assess her appeal.

"We are living in a state of fear as we don't know what will happen. My children are shocked as well because they grew up in Denmark and they feel Denmark is their home. I am fighting for our rights,” Kairout said. "I am not the only case in Denmark in this situation. Many Syrian families, women, children and older people are facing the same problem,” she said, adding that she wants her voice to be heard and her story to be known.

"There is a criminal who killed his own people in Syria,” she said. "Syria – there is a full corrupt regime and made most of the Syrian people refugees around the world. We didn't come here to enjoy a luxurious life, but we fled because of the ongoing war for around 10 years.”

Stephane Dujarric, a spokesperson for U.N. Secretary-General Antonio Guterres, said at a news conference on April 8 that "refugees should never be forced to go back.” The official underlined that refugees should be free to make the choice to return and "it should be done in dignity and, of course, in safety.”

"UNHCR does not consider the recent improvements in security in parts of Syria to be sufficiently fundamental, stable or durable to justify ending international protection for any group of refugees,” he added, referring to the body's refugee agency.

During 10 years of war, Bashar Assad's regime was accused numerous times of the "secret police" using torture and over 100,000 people disappearing. According to Human Rights Watch, arbitrary detentions are widespread in areas formerly controlled by rebels who have signed reconciliation agreements with Damascus.

Areas under the regime are unstable. There has been little recovery, services such as water and electricity are in short supply, and the collapse of the Syrian pound last year skyrocketed food prices by 230%.

The DRC said due to the lack of diplomatic relations between Denmark and the Assad regime, Syrians in Denmark cannot be returned to Syria and they will be put in departure centers indefinitely. The DRC told AA that according to Danish immigration services, "as much as 170 Syrians got their residency permits revoked (or not extended) in 2020 – and in January and February 2021, the figure was 84.”

"We believe, it is not only a wrong but also strange position for the Danish authorities to take as neither UNHCR nor any other European country to our knowledge deem Damascus as being safe for refugees' return,” Slente told AA.

"The absence of fighting in some areas of Syria does not mean that people can safely go back. We have numerous reports about arbitrary detentions and severe human rights abuse of the civilian population,” said Slente, who added that the DRC "disagrees with the decision to deem the Damascus area or any area in Syria safe for refugees to be returned.”

"The Syrians who are seeing their residence permit revoked are left in limbo at departure centers as a means to incentivize them to ‘voluntarily' go back to Syria despite the insecure conditions. This goes against basic protection principles and can have severe implications for people's mental and physical well-being, but it is also pointless to disrupt people's lives and once again uproot them to face a situation of despair and insecurity,” she said.

Refugees, whose residence permits are revoked are at the point of integration – they might be working or studying in the country, said Slente. "They will not be able to continue the life they have established in Denmark and will be placed on a waiting position without an end date” at the departure centers. "It is not a dignified way to treat people,” she said.

The humanitarian organization Refugees Welcome Denmark said 30 Syrians have already lost their appeal, but as Copenhagen and Damascus have no diplomatic relations, Danish authorities cannot directly deport people to Syria. At least some of the rejected applicants have been placed in an isolation ward, which activists said was a prison where the inmates were unable to work, study or receive adequate medical care.

Syrian men are usually exempted from the new policies as the authorities acknowledge that they run the risk of entering the Syrian military or being punished for draft evasion. The majority of those affected are women and the elderly, many of whom face separation from their children. Denmark hosts 5.8 million people, of which 500,000 are immigrants and 35,000 are Syrians.

The new attitude toward Syrian refugees is in stark contrast to neighboring Germany and Sweden. These two countries make it easier for the Syrian population to obtain permanent residence and citizenship. In addition to revoking residence permits for Syrians, the Danish government has also offered voluntary repatriates funding of 22,000 pounds ($30,434) per person. However, only 137 refugees accepted the offer in 2020 as they feared for their safety.

As the Danish government faced criticism from the international community and human rights groups, the country's immigration minister, Mattias Tesfaye, told Agence France-Presse (AFP) that: “The government’s policy is working and I won’t back down, it won’t happen. We have made it clear to the Syrian refugees that their residence permit is temporary and that the permit can be revoked if the need for protection ceases to exist.”

“It is pointless to remove people from the life they are trying to build in Denmark and put them in a waiting position without an end date,” Slente said. “It is also difficult to understand why decisions are made that cannot be implemented.”