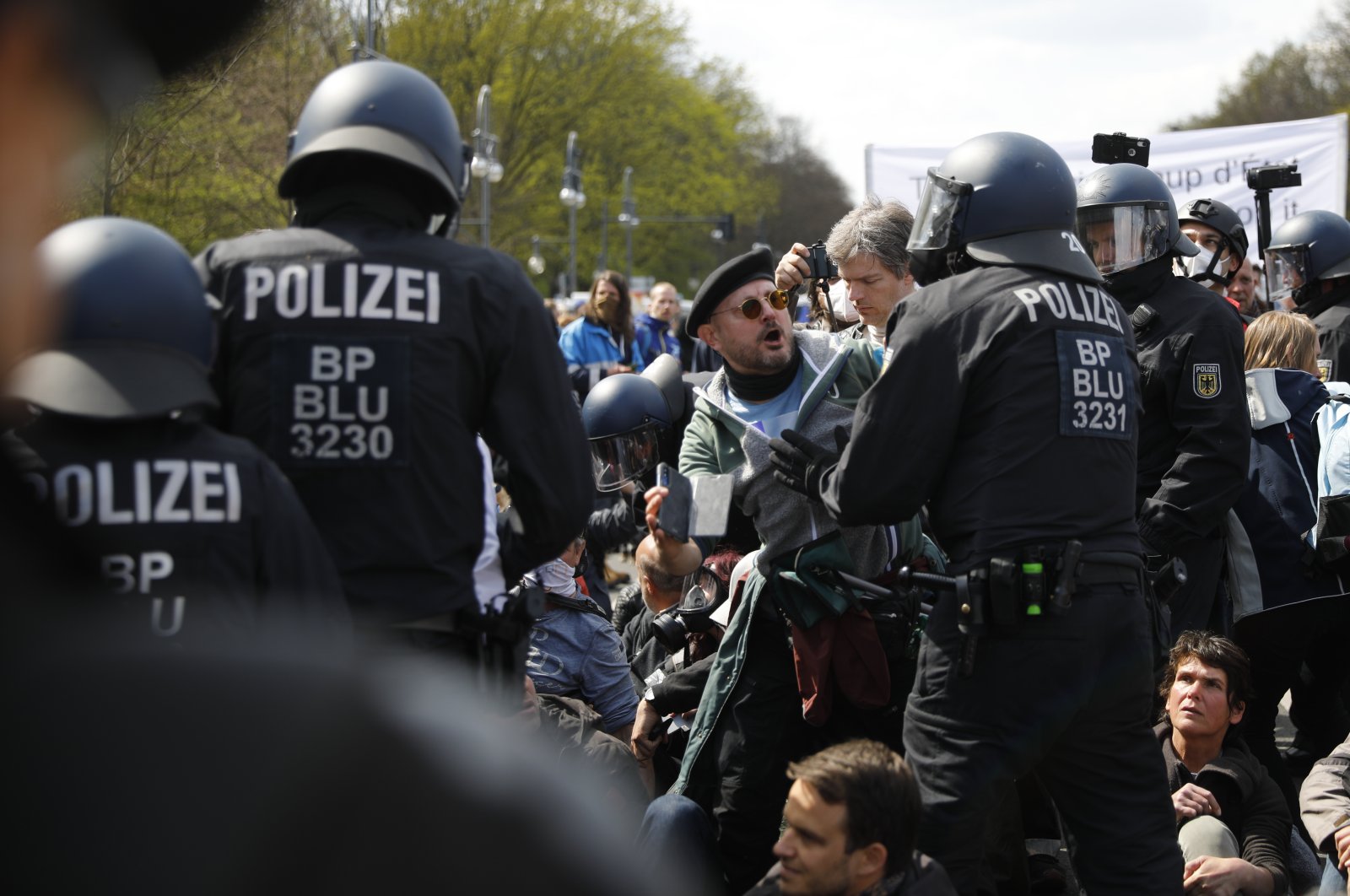 Clashes broke out Wednesday between anti-restrictions protesters and police in Germany after the country's lawmakers approved a proposal by German Chancellor Angela Merkel’s government to mandate uniform measures in areas where the coronavirus is spreading too quickly.

The legislation to apply an "emergency brake” consistently in areas with high infection rates is intended to end the patchwork of measures that has often characterized the pandemic response across highly decentralized Germany’s 16 states.

The lower house of parliament voted 342-250 for the plan on Wednesday, with 64 abstentions. The upper house, where state governments are represented, is due to consider the legislation Thursday. It features plans to impose a 10 p.m. to 5 a.m. curfew, limit personal contacts, close leisure and sports facilities and shut or restrict access to many stores, according to The Associated Press (AP).

Police fired tear gas as thousands of people demonstrated in Berlin against the proposed amendment. Around 8,000 protesters gathered ahead of a vote on the law in the Bundestag lower house of parliament on Wednesday, with more than 2,000 police officers deployed to the scene.

Protesters were carrying placards with slogans such as "Merkel & Co = high treason" and chanting "Wir sind das Volk" ("We are the people") – a common refrain in the run-up to the fall of the Berlin Wall in 1989.

Police started breaking up the demonstrations in the afternoon as protesters were not wearing masks or observing social distancing, a police spokesperson said. Seven people were arrested, added police.

Dubbed the "emergency brake," the law prescribes tough measures including sweeping shutdowns and overnight curfews in regions with incidence rates of more than 100 new infections per 100,000 people over the last seven days. It would also force schools to revert to virtual teaching in states where the incidence rate exceeds 165.

Only one state had an incidence rate below 100 on Wednesday, while seven topped 165 – including the two most populous of Bavaria and North Rhine-Westphalia.

The proposals have come under fierce opposition, particularly the plans for curfews in a country still scarred by memories of Nazi and communist dictatorships that spied on citizens and stole their freedoms. In a heated debate over the amendment, Christine Aschenberg-Dugnus of the pro-business FDP said the curfews were "not an appropriate measure" and the party would take legal action against them.

If passed by the parliament, the law will go to a second vote in the upper house, or Bundesrat, on Thursday before being signed off by President Frank-Walter Steinmeier.

Virus restrictions in Germany have so far been decided in consultations between Merkel and the leaders of the 16 states, with the regions ultimately responsible for implementing them. But in many cases, regional leaders have failed to put in place shutdown measures which they agreed with Merkel, with many choosing broad interpretations of the rules.

Merkel warned in a rare TV interview in March that she would not stand by and watch infection rates continue to rise, threatening the regional leaders with a change in the law if they did not play ball.

Defending the plan for tougher rules in parliament on Friday, Merkel pointed out that other countries have imposed far more restrictive measures.

"The third wave of the pandemic has our country firmly in its grip," she said. "The intensive care doctors are sending out one cry for help after another. Who are we if we ignore these emergency calls?"

Some German states, including Brandenburg, Mecklenburg-Western Pomerania and Baden-Wuerttemberg, have already sharpened their rules in anticipation of the new law. But critics say it does not go far enough, with doctors and scientists calling for a quick, hard lockdown to bring infections under control while the country's vaccination effort picks up pace.

"A standardization of the rules is welcome, but they are not far-reaching enough," Thorsten Lehr, a professor of clinical pharmacy at Saarland University, told Der Spiegel. Social Democrat member of Parliament and epidemiologist Karl Lauterbach told Die Welt newspaper the watered down curfews would "extend the duration of the lockdown and, unfortunately, lead to unnecessary deaths," as Agence France-Presse (AFP) reported.

The Robert Koch Institute (RKI) health agency reported 24,884 new coronavirus cases in the past 24 hours on Wednesday and 331 deaths, with a national incidence rate of 160.