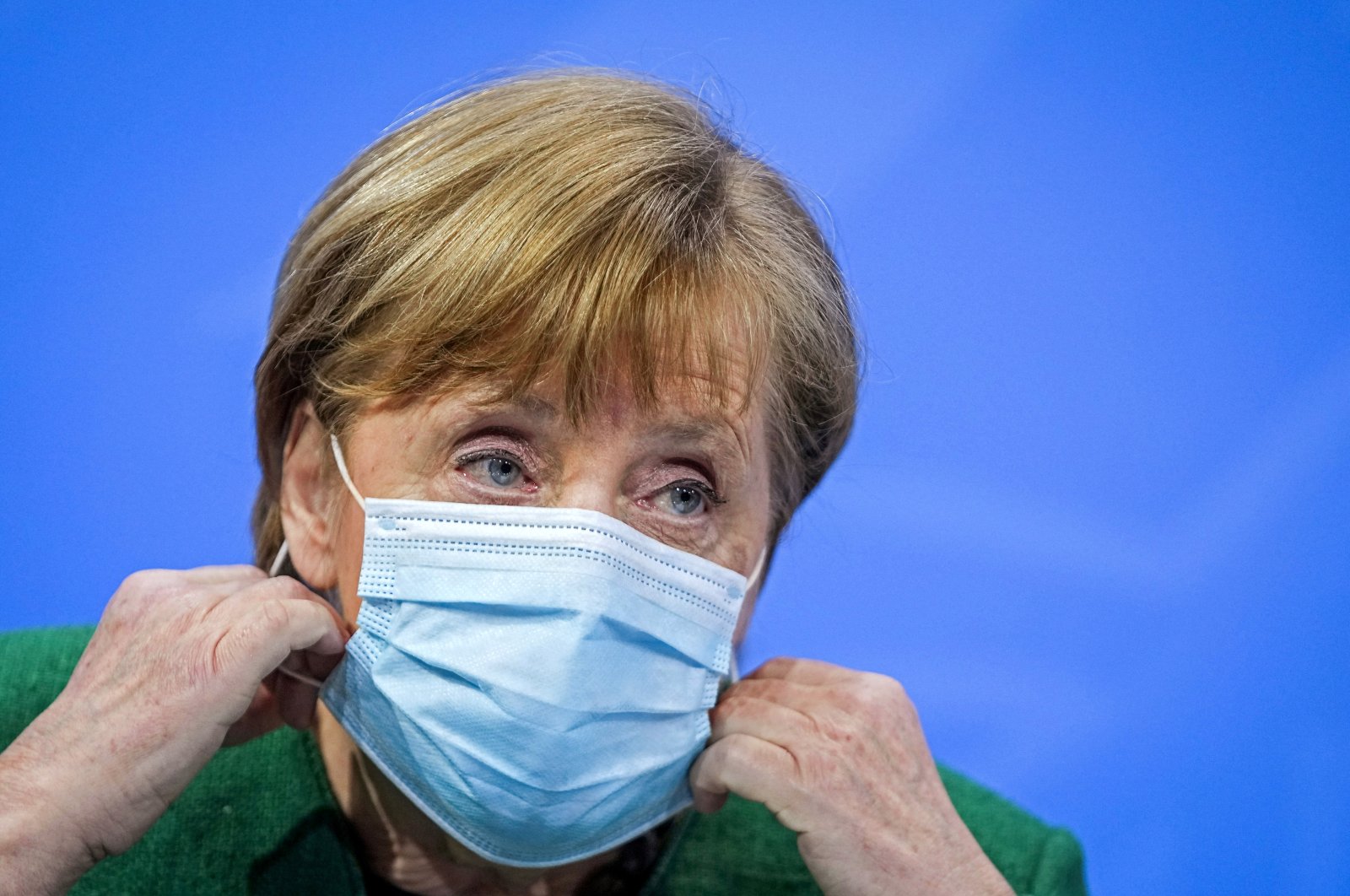 German Chancellor Angela Merkel holds her mask at a news conference after a meeting with state leaders to discuss options beyond the end of the pandemic lockdown, amid the outbreak of COVID-19, in Berlin, Germany, March 23, 2021. (Reuters Photo)
by Associated Press Mar 23, 2021 11:47 am
RECOMMENDED

Germany has extended its lockdown measures by another month and imposed several new restrictions, including largely shutting down public life over Easter, in an effort to drive down the rate of coronavirus infections.

Speaking early Tuesday after a lengthy video call with the country's 16 state governors, Chancellor Angela Merkel announced that restrictions previously set to run through March 28 will now remain in place until April 18.

COVID-19 infections have increased steadily in Germany as the more contagious variant first detected in Britain has become dominant, and the country's daily number of cases per capita has passed that of the United States.

Since their last meeting three weeks ago, which saw the two sides agree on a multi-step plan to relax restrictions, several states have tried to avoid going back into tougher lockdowns when the weekly number of new infections exceeds 100 per 100,000 residents on three consecutive days.

Merkel made clear that she wouldn't accept that. "Unfortunately, we will have to make use of this emergency brake,” she said. The weekly infection rate per 100,000 people stood at 107 nationwide on Monday, up from the mid-60s three weeks ago.

Officials agreed to largely shut down public life from April 1 to April 3, adding a public holiday and shutting down most stores for the period. Public gatherings will be banned between April 1 and April 5, to encourage people to stay at home.

Amid concern over the rise in Germans traveling abroad on holidays, authorities also agreed on a blanket requirement for air travelers to be tested for COVID-19 before boarding a flight to Germany.

COVID-19 restrictions in Germany haven't always been met with acceptance by the public as just this week around 10,000 protesters gathered in the central city of Kassel on Saturday and clashed with officers in demonstrations over coronavirus measures.

Drawing up legally watertight rules has proved a headache at times as well. A court in Germany’s most populous state, North Rhine-Westphalia, said Monday it struck down rules requiring people to get appointments to visit shops. It said they violated a requirement that businesses get equal treatment.

The state government promptly reinstated the rules, tightening them for some businesses, such as bookshops and garden centers, that were previously exempt.

According to Tuesday's agreement, authorities will aim to offer free tests to all students and teachers in German schools, many of which have only recently reopened after months of remote teaching.

Merkel said Germany, which had comparatively low deaths during the first phase of the pandemic last spring, has seen "successes but also of setbacks” and insisted that the situation would improve as more people get vaccinated.

Germany's vaccination campaign has so far lagged behind expectations, with only about 9% of the population receiving at least a first shot and 4% receiving both doses by Sunday.

"It's difficult for longer than we thought,” said Merkel. "But there's definitely light visible at the end of the tunnel.”

Asked about the European Union's plans to restrict the export of vaccines and components, Merkel said she supported efforts by the bloc's executive Commission to ensure contracts are fulfilled, citing the supply problems the EU has had with the AstraZeneca shot.

Britain, which left the EU last year, has strongly protested against the plans, fearing it could get cut off from deliveries.

Merkel said she and French President Emmanuel Macron had each spoken to Britain's Prime Minister Boris Johnson about the issue in recent days and EU leaders would aim to reach a decision "in a responsible way” at a virtual summit Thursday.