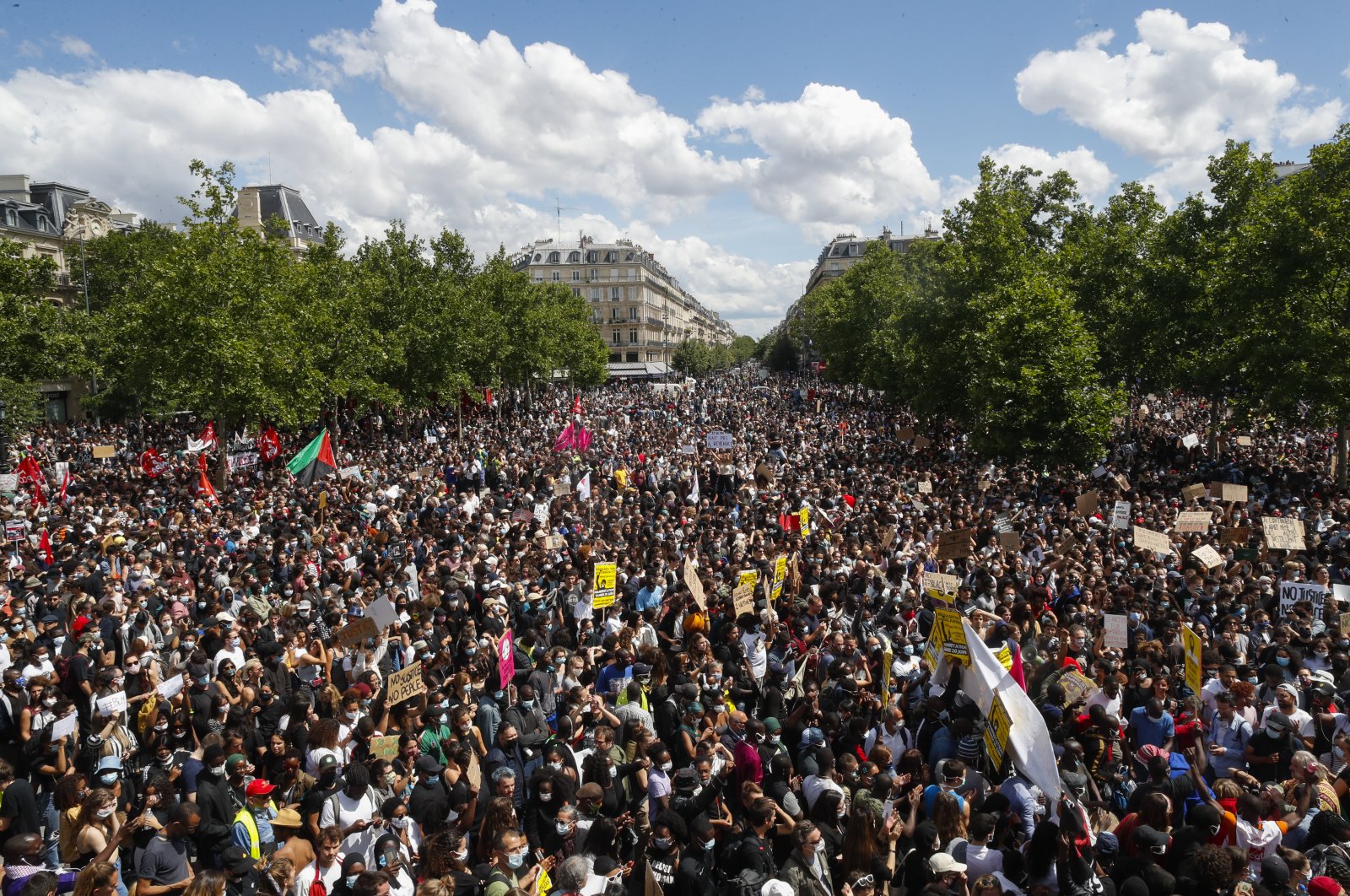 Thousands of people demonstrate against police brutality and racism in Paris, France, Saturday, June 13, 2020, prior to a march organized by supporters of Adama Traore, who died in police custody in 2016 in circumstances that remain unclear despite four years of back-and-forth autopsies. (AP Photo)
by ASSOCIATED PRESS Jun 13, 2020 5:03 pm
RECOMMENDED

Thousands demonstrated in Paris on Saturday to denounce police brutality and entrenched racism in French society, as France’s minorities increasingly push back against a national doctrine of colorblindness that has failed to eradicate discrimination.

Angry shouts rose from the peaceful and racially diverse crowd as a small group of white extreme-right activists climbed a building overlooking the protest and unfurled a huge banner denouncing "anti-white racism.”

Police did not arrest the counter-demonstrators, but residents in the building tore part of the banner down, one raising his fist in victory. Officers prevented those from attending the main rally from being met with the far-right activists gathered.

Police surrounded the intended march route, bracing for potential violence after scattered clashes at some previous demonstrations around France also inspired by the Black Lives Matter movement and George Floyd’s death in the U.S. The Paris protest was among several in France and other countries this weekend for the same cause.

Myriam Boicoulin, 31, who was born in the French Caribbean island of Martinique, said she marched Saturday because she "wants to be heard.”

"The fact of being visible is enormous,” Boicoulin told The Associated Press. As a black woman living in mainland France, she said, "I’m constantly obliged to adapt, to make compromises, not make waves - to be almost white, in fact.”

"It’s the first time people see us," she said. "Let us breathe.”

Saturday’s march in Paris was led by supporters of Adama Traore, a French black man who died in police custody in 2016 in circumstances that remain unclear despite four years of back-and-forth autopsies. No one has been charged in the case.

"We are are all demanding the same thing – fair justice for everyone,” Traore’s sister Assa told the crowd. She is increasingly seeking to transform the support committee for her brother into a broader-based movement for social justice, notably since Floyd’s death.

At Saturday’s protest, a huge portrait showed a face that was half Floyd, half Traore. Banners strung between trees around Republic Square bore the names, scrawled in red, of dozens of others who have died or suffered violence at the hands of the French police.

Along the march route, the Paris police chief ordered merchants and city officials to clear sidewalks along the march route of anything that could be set on fire or used by troublemakers against police. Gatherings of more than 10 people remain banned in France because of virus containment measures.

Protests were also being held Saturday in Marseille, Lyon and other French cities.

In the wake of George Floyd's death at the hands of American police and the global protests it unleashed, the French government is under growing pressure to address long-running accusations of excessive violence by police, particularly against minorities.

Researchers have documented racial profiling by French police, and investigations were opened recently into racist comments in private Facebook and WhatsApp groups for police officers.

The interior minister promised this week to stamp out racism and announced a ban on police chokeholds during arrests. But French police unions held their own demonstrations Friday, saying they're being unfairly labeled as racist because of a few extremist officers, and that they don't have enough tools to deal with violent suspects.

After meeting with union representatives, the interior minister said Friday night that police will start experimenting with expanded use of stun-guns in the future, despite concerns about their safety.

Assa Traore said that when she saw images of the police protesting, "I wasn't even angry. I was ashamed of the French police. In the whole world, the only country where police officers demonstrate to keep their permission to kill is France.”