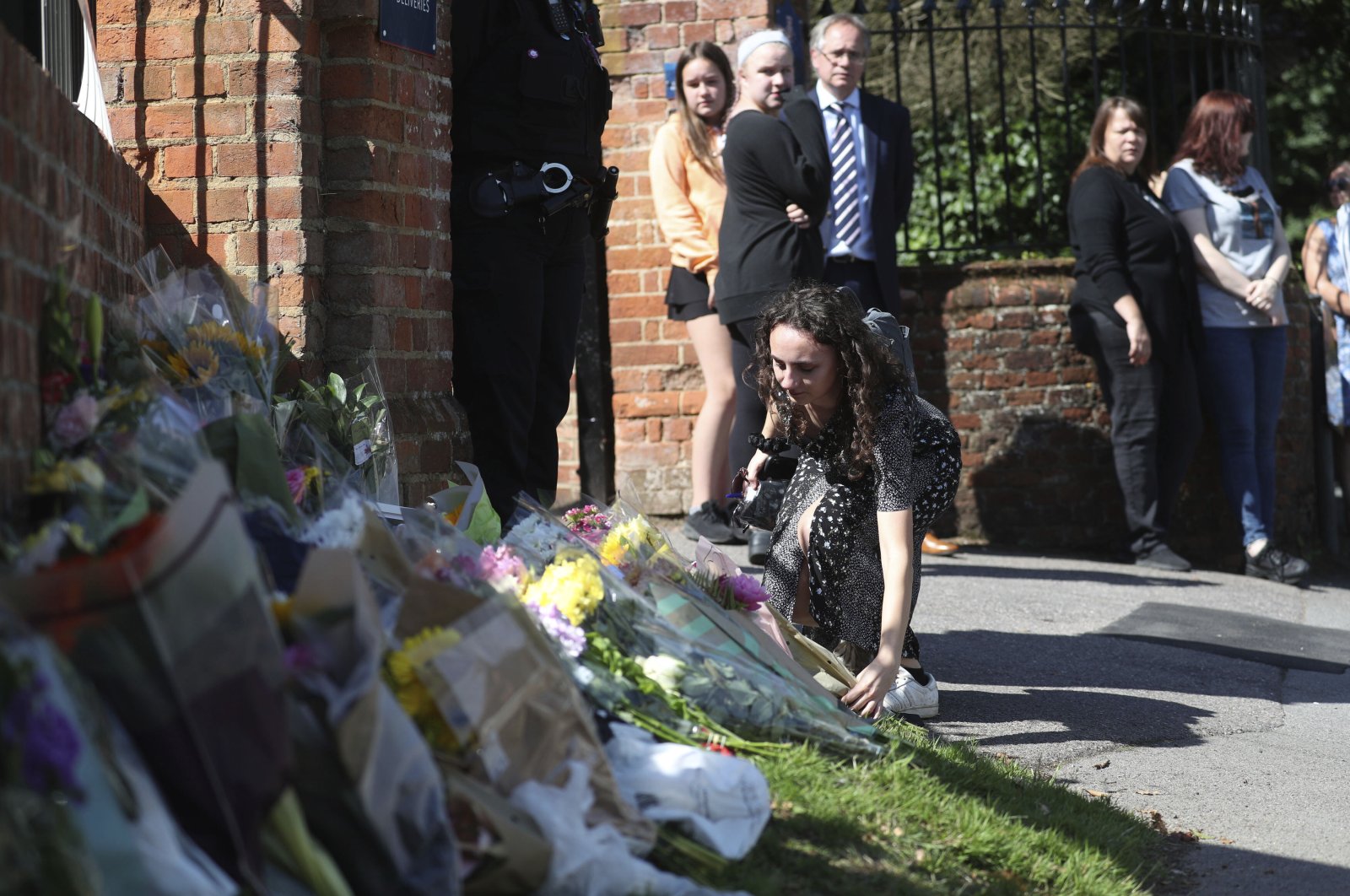 Flowers are placed at the entrance to the Holt School in memory of teacher James Furlong, a victim of a terror attack in nearby Reading, in Wokingham, England, June 22, 2020. (AP Photo)
by Compiled from Wire Services
Jun 22, 2020 3:19 pm

The English town of Reading mourned Monday for three people stabbed to death in what is being treated as a "terror attack," gathering for a moment of silence as police questioned the suspected lone attacker.

More than 100 students lit candles and laid flowers in memory of history teacher James Furlong, who was named as one of the victims. A flag in the courtyard of the Holt School, where he taught in nearby Wokingham, had been lowered to half-staff.

"He was so passionate and enthusiastic about history and about learning, and anything that was boring, anything you didn’t find interesting, he would make it interesting,″ former student Molly Collins told the BBC. "He would spend time with you, he got to know people individually, and he just always went the extra mile for everyone.”

Furlong's friend, Joe Ritchie-Bennett, 39, was named by his family in Philadelphia as the second victim. The identity of the third victim has not been released.

The stabbing rampage took place Saturday evening as groups of people relaxed in Forbury Gardens park in Reading, a town of 200,000 people 40 miles (64 kilometers) west of London. A 25-year-old man who is believed to be the lone attacker is in custody, but officials said the motive for the carnage was unclear.

Police have not identified the suspect, but Britain’s national news agency, Press Association, and other media outlets named him as Khairi Saadallah, a Libyan asylum-seeker living in Reading.

The BBC reported that Saadallah was investigated by British security services last year over concerns he planned to travel abroad to join a terrorist group, but that he was not determined to be a major threat.

The Philadelphia Inquirer quoted the father of Ritchie-Bennett as saying his son had moved to England from the U.S. around 15 years ago. Robert Ritchie said his son worked for a law firm in London before taking a job about 10 years ago at a Dutch pharmaceutical company that had its British headquarters in Reading.

Turkey on Sunday condemned the stabbing rampage. "This heinous attack once again demonstrated the brutal and merciless nature of terrorism that targets the lives of innocent people. We convey our deepest condolences to the British people with whom we are in solidarity on this difficult day," said a statement released by the Turkish Foreign Ministry.

Turkish Foreign Minister Mevlüt Çavuşoğlu spoke to his British counterpart Dominic Raab over the phone, according to diplomatic sources who asked not to be named due to restrictions on speaking to the media.

During the conversation, Çavuşoğlu expressed sorrow over the stabbing incident and said that he shared the pain of the families of the deceased and the injured. Raab thanked Çavuşoğlu for his good wishes.