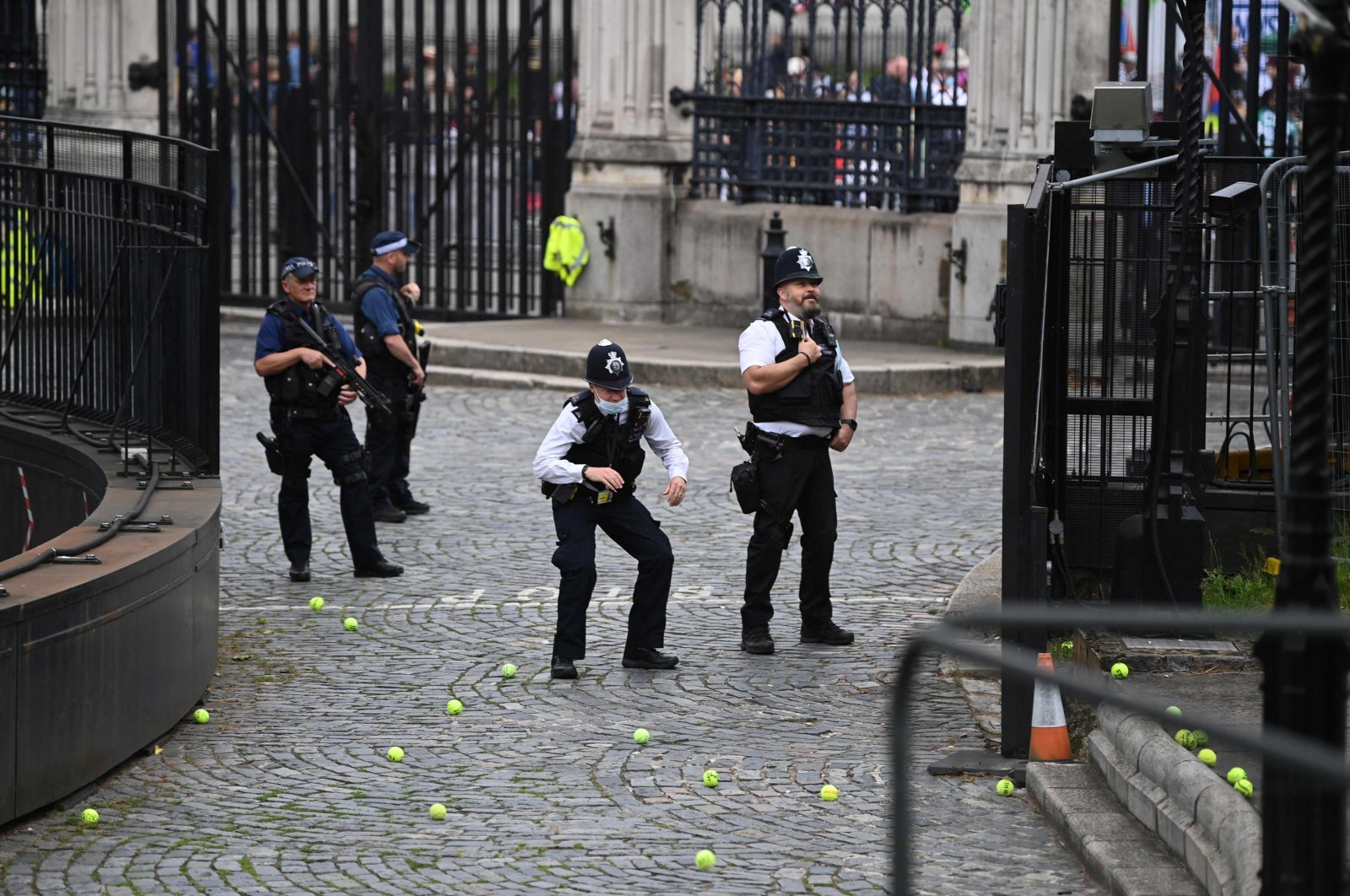 Tennis balls flew through the air Saturday aimed at the United Kingdom Parliament and Downing Street as thousands joined an anti-lockdown demonstration in central London.

Hundreds of tennis balls, some bearing protest messages, were hurled over the fences surrounding the Houses of Parliament.

Protesters let off flares and also threw tennis balls outside 10 Downing Street, with some shouting "shame on you" and pointing toward Number 10, followed by booing.

Asked why protesters were throwing tennis balls, one man, who did not wish to be named, said: "They have little messages on them. Most of them are not very nice."

Protesters, many not wearing masks, carried placards bearing anti-vaccine and anti-restrictions messages, while others waved flags.

Iain McCausland, who traveled to London from Devon, said: "The main reason I'm here is because I feel this lockdown has come at the cost of our liberty and rights. Our freedom to assemble, our freedom to travel and work. I'm really quite angry with the Government, so are everyone here."

Kayleigh Brooke, 29, from Manchester, said she has been camping for four weeks on Clapham Common, south London, in protest at the vaccine rollout.

"We want the Coronavirus Act 2020 gone, and we will keep on protesting until that happens," she said.

A man who only gave his name as Gareth, 29, from Walthamstow, north-east London, said, "I'm on the march because I feel that the government is overreaching and its response to a threat has been far beyond what's necessary."

Other gatherings and marches are also taking place in central London over the weekend.

The "People's Assembly" had promoted a national demonstration against the government, which included criticism of a range of issues including the controversial "Police, Crime, Sentencing and Courts" bill.

Causes being represented in other Twitter users' photos Saturday included support for Palestine and the rights of trans people.

Three people were arrested during the protests for breach of the peace, assault on police and an individual who was already wanted for a previous assault.

Gold Commander of the operation, Chief Superintendent Karen Findlay, said, "The significant majority of those protesting today engaged in a positive manner with our officers."

"We did experience small pockets of anti-social behavior in Whitehall which involved missiles being thrown at officers, but these were dealt with quickly and effectively," he said.

Three officers suffered minor injuries throughout the course of the day, the Met Police said.

On Friday, the Metropolitan Police said it had arrested 12 people as part of a crackdown on demonstrators ahead of the weekend and warned it had "zero tolerance for disorder or criminality."

Raids at three locations in the capital saw the seizing of items including bamboo structures, lock-on equipment and other items "which could be used to cause criminal damage and obstructions."

"Extinction Rebellion" reported on its website that four members were arrested at one of its warehouses in east London.

It is claimed the women had been "creating art" for the Free the Press march Sunday in Parliament Square.