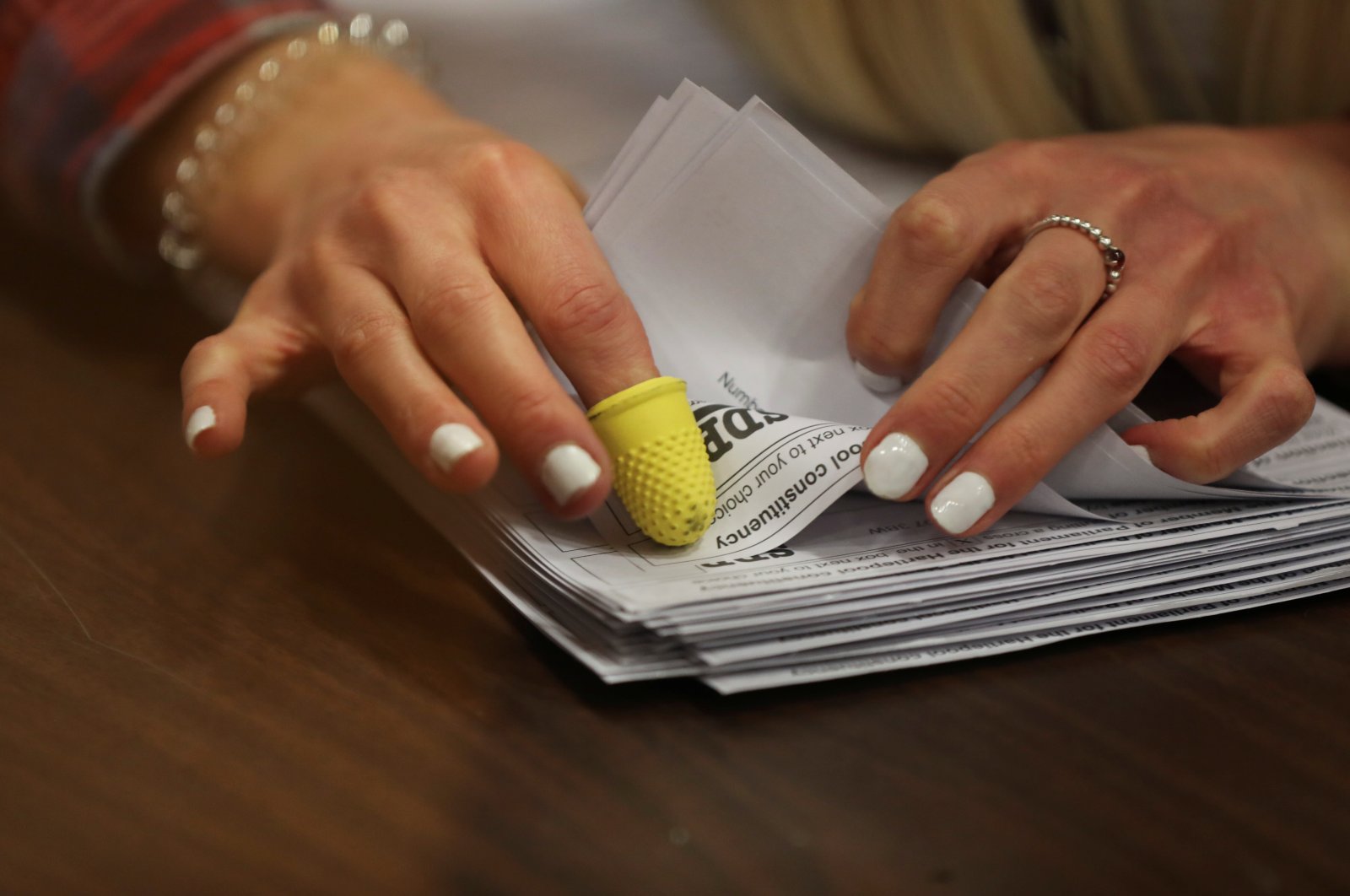 Ballots for the local elections are counted at Mill House Leisure Centre, in Hartlepool, England, May 7, 2021. (Reuters Photo)
by French Press Agency - AFP May 07, 2021 10:05 am
RECOMMENDED

The "Super Thursday" regional and local elections could reshape the United Kingdom as pro-independence forces in Scotland bid to break away. Results for the Scottish Parliament are due Saturday.

Early results from England on Friday showed that the Conservatives had won the parliamentary seat of Hartlepool in the north of the country, a deep blow to the opposition Labour Party and its leader Keir Starmer.

Hartlepool is a rust-belt constituency deep in Labour's northeastern heartland, and it has never voted Conservative since its creation in 1974.

The vote in the strongly pro-Brexit constituency was called alongside the local polls after its Labour incumbent quit over allegations of sexual harassment.

"It's quite clear when we see the ballots land on the table today that we haven't been able to catch enough of those numbers to get us over the line today," Labour's shadow transport secretary Jim McMahon told the BBC.

Ahead of the official results, a giant inflatable Boris Johnson appeared outside the building where the vote count was taking place.

The outcome suggests Johnson has enjoyed a "vaccine bounce" even while Britain has suffered one of the world's worst death tolls from COVID-19.

Underlining Hartlepool's importance in the national battle, both leaders paid repeat campaign visits there, and the Conservatives were also banking on a strong showing in mayoral races in other English regions.

Johnson, after shrugging off questions about who paid initially for costly renovations to his Downing Street flat, has also campaigned on his record as the leader who finally "got Brexit done" following Britain's full withdrawal from the European Union this year.

"It's the Conservatives who are delivering on your priorities, better taxpayer value, other parties (are) just playing political games," he said in a Twitter video clip on Thursday.

Retaining Hartlepool had been seen as pivotal for Starmer ahead of a general election due in 2024 after the Conservatives grabbed a string of seats across Labour's so-called "Red Wall" heartland in northern England at the last general election in December 2019, when Brexit was the dominant issue.

Some 250 jobs at the city's Liberty Steel plant are at risk after the collapse of finance firm Greensill Capital, whose failure has dragged in former prime minister David Cameron and drawn Labour accusations of Tory "sleaze."

Starmer had already played down expectations for Labour, stressing, "I never thought we would climb the mountain we have to climb in just one year."

"We've got to rebuild into the next general election – that is the task in hand," he said after hard-left predecessor Jeremy Corbyn led Labour in 2019 to its worst election drubbing since 1935.

Voting also took place Thursday for local councils in England, regional mayors including in London, and for the devolved assemblies in Wales and Scotland.

In Edinburgh, the Scottish National Party (SNP) is seeking a pro-independence majority to put pressure on Johnson to permit another referendum on splitting from the U.K., after most Scots voted in 2014 to stay in.

"It really is on a knife edge," SNP leader and Scottish First Minister Nicola Sturgeon tweeted Thursday, appealing for turnout as she campaigns to hold a second plebiscite once the pandemic subsides.