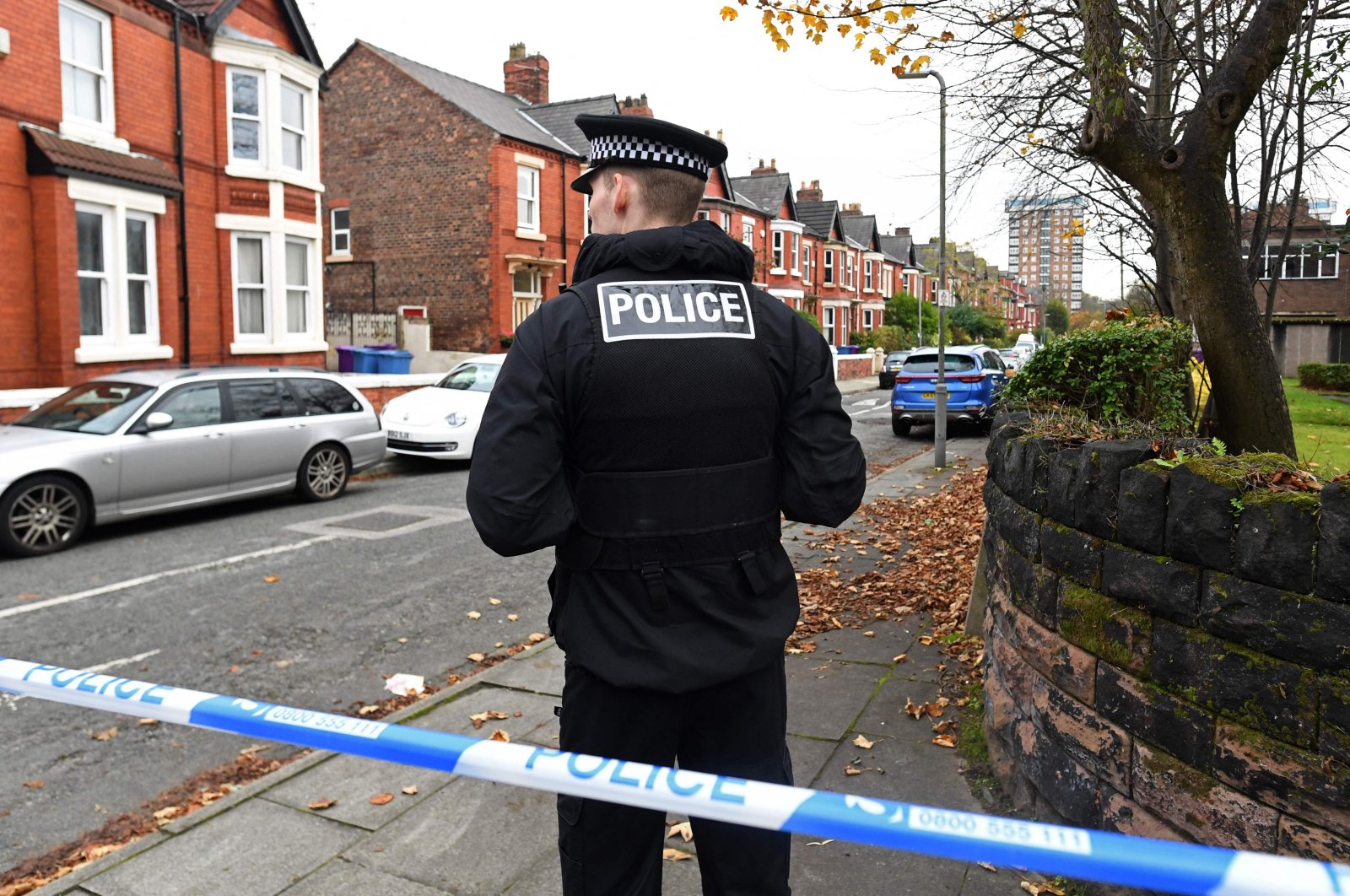 A police officer works inside a cordoned-off area on Rutland Avenue, the place where police have confirmed the passenger of the taxi that later exploded outside the Women's Hospital in Liverpool was picked up, Liverpool, U.K., Nov. 15, 2021. (AFP Photo)
by Agencies Nov 16, 2021 11:34 am
RECOMMENDED

Three men aged 21, 26 and 29, who were held on Sunday, and one aged 20 who was detained on Monday for terrorism laws in the Kensington area of Liverpool have been released from police custody following an interview, Counter Terrorism Policing North West (CTPNW) said Monday night.

The development came shortly after police named Emad al-Swealmeen, a 32-year-old asylum-seeker who converted to Christianity in 2017 and was killed in the bombing, as the main suspect for the attack.

The CTPNW said they "strongly believe" al-Swealmeen was the passenger who died when a taxi exploded shortly before 11 a.m. on Sunday. They previously said he was picked up in the Rutland Avenue area of the city and asked to be taken to the hospital. As the car reached the hospital's passenger drop-off point, it exploded. Searches are underway at the Rutland Avenue address and a second address in Sutcliffe Street, which officers have said al-Swealmeen previously lived at.

Security Minister Damian Hinds said it "could take weeks" to uncover the whole story behind the attack.

"This has been an absolutely terrible event, very upsetting and unsettling for many," he said.

The terror threat level in the U.K. on Monday was raised from "substantial” to "severe,” which means an attack is "highly likely.”

The decision followed Sunday’s explosion in a taxi outside Liverpool Women’s Hospital that killed one person and injured another.

Police said they believe an explosive device was brought into the taxi by a passenger, who died in the incident, while the taxi driver escaped with injuries. Police added that they found "significant items” in raids and searches after the incident. Also on Monday, a "controlled explosion" was carried out in Sefton Park, Liverpool as police inquiries into the incident continued.

Assistant Chief Constable Russ Jackson, also from the CTPNW, previously told journalists at Merseyside Police headquarters that the "improvised" explosive device had been "manufactured," adding the force's assumption was that it was built by the suspect in the taxi.

Official sources previously confirmed to the PA news agency the suspect was not previously known to the security services.

The driver of the cab, named locally as David Perry, was treated at a hospital after fleeing the car just before it burst into flames and has been discharged. He was praised by Prime Minister Boris Johnson for behaving with "incredible presence of mind and bravery," and lauded for his "heroic efforts" by the mayor of Liverpool, Joanne Anderson.

Speaking at a press conference at Downing Street, Johnson said the blast was a "stark reminder" to the public to remain vigilant, adding: "What yesterday showed above all is that the British people will never be cowed by terrorism, we will never give in to those who seek to divide us with senseless acts of violence.

"And our freedoms and our way of life will always prevail."

He was set to host an emergency Cobra meeting on Monday in response to the incident.

Kathryn Thomson, chief executive of Liverpool Women's Hospital, said in a statement that the last two days had been "extremely upsetting and traumatising" for people associated with the hospital.

She added that despite security and police on-site, services are now running "as close to normal as can be expected."