UK's 'Plan B' for omicron outbreak ahead of Christmas sparks outrage 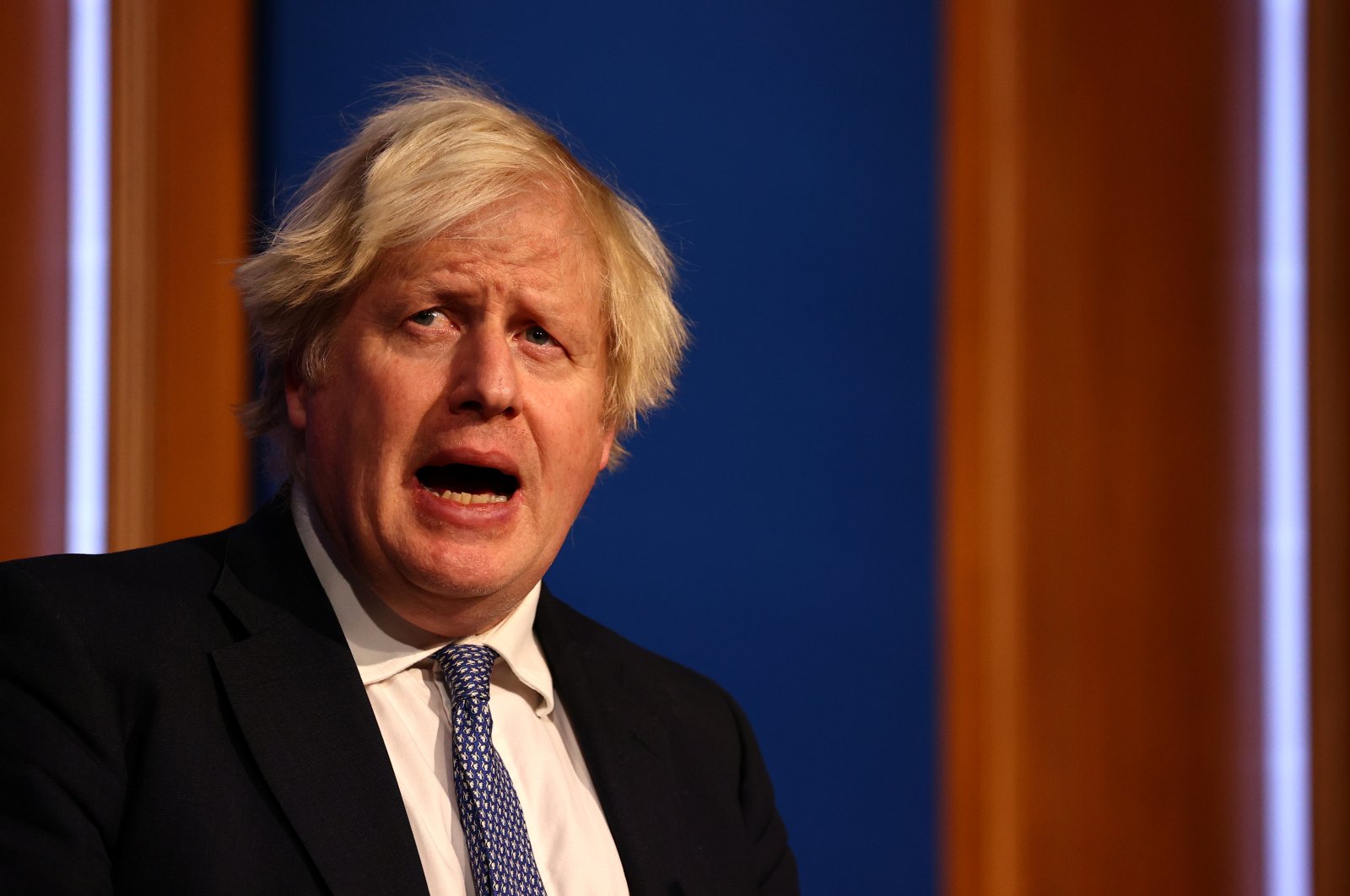 British Prime Minister Boris Johnson is facing widespread anger after hastily triggering a switch to his Plan B for coronavirus restrictions to tackle the omicron variant as Downing Street was engulfed in a crisis about allegations of a rule-breaking Christmas party.

The prime minister announced on Wednesday that work-from-home guidance will return, СOVID-19 health certificates are to become mandatory in large venues and mask rules will be extended to combat the rapidly spreading strain in England.

But, despite the strengthening of the rules, he said Christmas parties and nativities could go ahead, as he set out the move while under increasing pressure regarding a possible party in No. 10 Downing Street, where the prime minister's offices are located, last December.

Backbenchers from his Conservative Party, or Tories, openly questioned the government's "credibility" in being able to enforce the rules while so many believed Downing Street had breached them with the alleged 2020 office party.

Mandatory mask-wearing will be extended to indoor public venues, including cinemas, theaters and places of worship from Friday, but will not be required in pubs and restaurants, while the guidance to work from home where possible will return on Monday.

The National Health Service (NHS) COVID-19 pass, which can be obtained after receiving two vaccines or a negative lateral flow test, will be introduced for entry into nightclubs and other large venues from Wednesday, as Johnson set out the "proportionate and responsible" measures.

But he was forced to insist the public understands the "vital importance" of the measures as he faced continued questions about events in the run-up to last Christmas and Downing Street's denials that a reported gathering on Dec. 18 amounted to a party.

Announcing the restrictions simultaneously in the Commons, Health Secretary Sajid Javid was told to "resign" by senior Tory William Wragg as the party row added to anger and fears that public support for the Conservatives had further "taken a hit" following the Owen Paterson affair, in which Johnson stands accused of changing the rules for a colleague charged with corruption.

Conservative former Chief Whip Mark Harper added: "What I am really concerned about is that it is unquestionably the case that over the last few weeks the government's credibility, whether it is on Paterson or on the Christmas parties, has taken a hit.

"Why should people at home listening to the prime minister and the secretary of state do things that people working in Number 10 Downing Street are not prepared to do?"

Tory lawmaker Ben Bradley ruled out voting for Plan B, which includes "discriminatory" vaccine passports, and former Minister David Davis questioned, "how are you going to prosecute people who don't obey it given the four previous parties?"

"I think the real issue is on the authority of the government to enforce, as it were, a new lockdown because people look at this and say why should we? It's them and us again," Davis told ITV's Peston.

At the Downing Street briefing, Johnson denied suspicions he had brought forward the announcement to divert attention from the row and the leaked video showing No. 10 staff laughing about restrictions after the alleged party, which forced the resignation of government aide Allegra Stratton.

"You've got to act to protect public health when you've got the clear evidence," the prime minister was quoted by the Deutsche Presse-Agentur (dpa).

Javid said Thursday that Britain's decision to impose restrictions to slow the spread of the omicron coronavirus variant will likely avoid the need to impose much tougher controls in the new year. He said the omicron variant was spreading more swiftly than any other variant studied and could result in around one million infections across the United Kingdom by the end of the month if transmission continued at the current rate.

Javid said that the government has acted to stop the NHS from coming under unsustainable pressure.

"I hope that most people will understand that by taking some decisive action now, we can potentially avoid action later," Javid told Sky News, according to remarks carried by Reuters. Asked if tougher measures could be imposed in January, Javid said: "No. I hope not."

Javid said the measures would buy time to give more people booster shots, which he said would boost protection against severe disease even if omicron was able to partially evade vaccines. But businesses reacted with incredulity to a work-from-home order during one of the busiest trading periods of the year, in the run-up to Christmas.

Asked if there would be further support for firms who might lose money due to Plan B coming into force, Javid said it would be kept under review but the measures should not be too damaging.

"The measures we've taken under Plan B, although they have an impact, they're designed to have the minimal impact," he said, adding there was no plan to impose mandatory COVID-19 vaccination for the general population.

Javid said the new restrictions were being imposed "with a heavy heart," but insisted they were necessary as he said there are 568 confirmed cases of omicron in Britain, but that the true figure is estimated to be "probably closer to 10,000." He said they would be reviewed on Jan. 5, before their expiry date of Jan. 26.

The Scientific Advisory Group for Emergencies (SAGE) warned Omicron is spreading "rapidly" and it is possible hospital admissions from the new variant in England could exceed 1,000 per day – and still be increasing – by the end of the year.

"The overall scale of any wave of hospitalizations without interventions is highly uncertain, but the peak could reach several times this level," the minutes from a meeting held on Tuesday said.

Kate Nicholls, the head of trade body UKHospitality, warned of "catastrophic" results without government support for the sector, while unions called for furlough measures to return.

Frances O'Grady, the general secretary of the Trades Union Congress, said: "Requiring people to work from home over the busy Christmas period will hit jobs – unless ministers bring back furlough."

COVID-19 health certificates will apply to unseated indoor venues with more than 500 attendees and outside where there are more than 4,000 people.

The prime minister said passes can be obtained with a negative lateral flow test or by having had two doses of a vaccine, but hinted this could change by saying, "we will keep this under review as the boosters rollout."

Members of Parliament are expected to be given a vote on the measures on Tuesday, during which a number of Tory rebels who have been angered by restrictions are poised to oppose the government.

But shadow health secretary Wes Streeting said Labor would "put public health first" and support the measures, meaning they will almost certainly be approved in the Commons, as he accused the prime minister of having "undermined public trust and confidence" at a "critical time."

"It's quite clear, Boris Johnson simply isn't up to the job and Conservative MPs need to ask themselves whether they are happy for this man to continue being our prime minister," he told reporters.

In a London report, Andrew Simmons, a reporter from Doha-based Al-Jazeera media outlet, said recent allegations that Johnson employees threw a party in Downing Street during their Christmas isolation last year undermined his legitimacy. A video depicting senior staff guffawing and joking about how to explain the party in Downing Street during a Christmas COVID-19 lockdown last year sparked anger and indignation. After the incident, Johnson apologized.

Britons are wondering how Johnson can “really be a moral authority, guiding the public on what to do” after avoiding explanations about the Christmas party last year, which was “offensive to the British public," Simmons said.