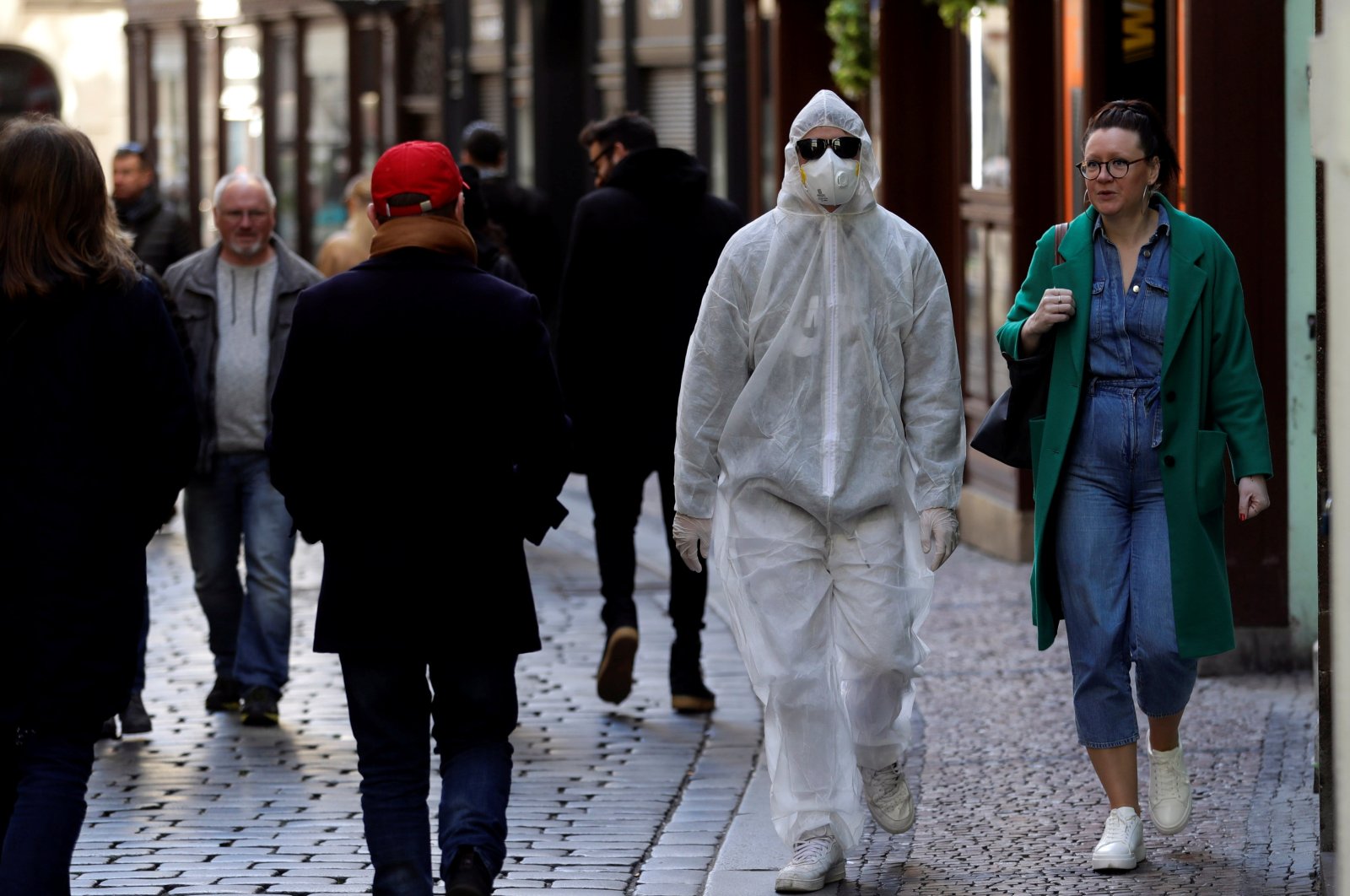 A man wearing a protective suit walks through the Prague city center, as the Czech government shut most shops and restaurants for 10 days as part of measures to contain the spread of the new coronavirus disease, Czech Republic, March 14, 2020. (Reuters Photo)
by Daily Sabah with Reuters Nov 18, 2021 4:19 pm
RECOMMENDED

The Czech government has approved plans to only allow people who are vaccinated against COVID-19 or have recovered from the illness in the past six months into restaurants, hotels and other services, Prime Minister Andrej Babis said on Thursday.

The government had flagged the new measures this week as the country battles a surge in COVID-19 cases and seeks to boost vaccination numbers in the nation of 10.7 million.The state will also require testing for COVID-19 at companies as part of new measures, similar to a set-up it had earlier this year during the last major wave of the pandemic, according to Reuters.

The Czech Republic reported 14,119 new coronavirus cases for Wednesday, the fourth highest count in the past two weeks and coming one day after a record daily tally, Health Ministry data showed on Thursday. The ministry recorded a new high of 22,511 cases on Tuesday. Hospitals have been filling up, although the number of patients, at about 4,500, is still at about half of the peaks seen in March.

The country's vaccination rate is below the European Union average, with 58% of the total population inoculated.

As the COVID-19 cases on the rise in Europe, the governments across the continent struggle to halt the outgoing pandemic and try various methods to contain the spreading of the virus. The Czech Republic became the latest state to do so. Earlier in November, Austria imposed a lockdown on its unvaccinated citizens, allowing them leave the house only to go to work, shop for essential needs or visit a doctor. They will also be allowed to go outside for fresh air at any time for the benefit of their physical and mental health.

Austria's daily coronavirus infections hit a new record on Thursday as the hardest-hit provinces started planning a full lockdown. Roughly 66% of Austria's population is fully vaccinated, one of the lowest rates in western Europe. Its infections are among the highest on the continent, with a seven-day incidence of 971 per 100,000 people.

With colder weather setting in as winter approaches, cases have surged across Europe, prompting governments to consider reimposing unpopular lockdowns. While the Netherlands has imposed a partial lockdown that applies to all, Austria has sought not to impose extra restrictions on the vaccinated.

Daily infections on Thursday rose above 15,000 for the first time, reaching 15,145. The peak of the biggest wave of infections before this was 9,586 about a year ago, when the country went into full lockdown.

The hardest-hit of Austria's nine provinces are Upper Austria, a stronghold of the far-right and vaccine-criticizing Freedom Party, which has the country's highest infection rate and its lowest vaccination rate, and neighboring Salzburg. The conservative governor of Upper Austria, Thomas Stelzer, said on Thursday that if Austria did not lock down nationally, his province would, Austrian media reported.

"If no national lockdown is ordered tomorrow, there will definitely be a lockdown of several weeks in Upper Austria together with Salzburg. We will coordinate with our neighboring province (Salzburg) and with the federal government," newspaper Kurier quoted Stelzer as telling Upper Austria's parliament.