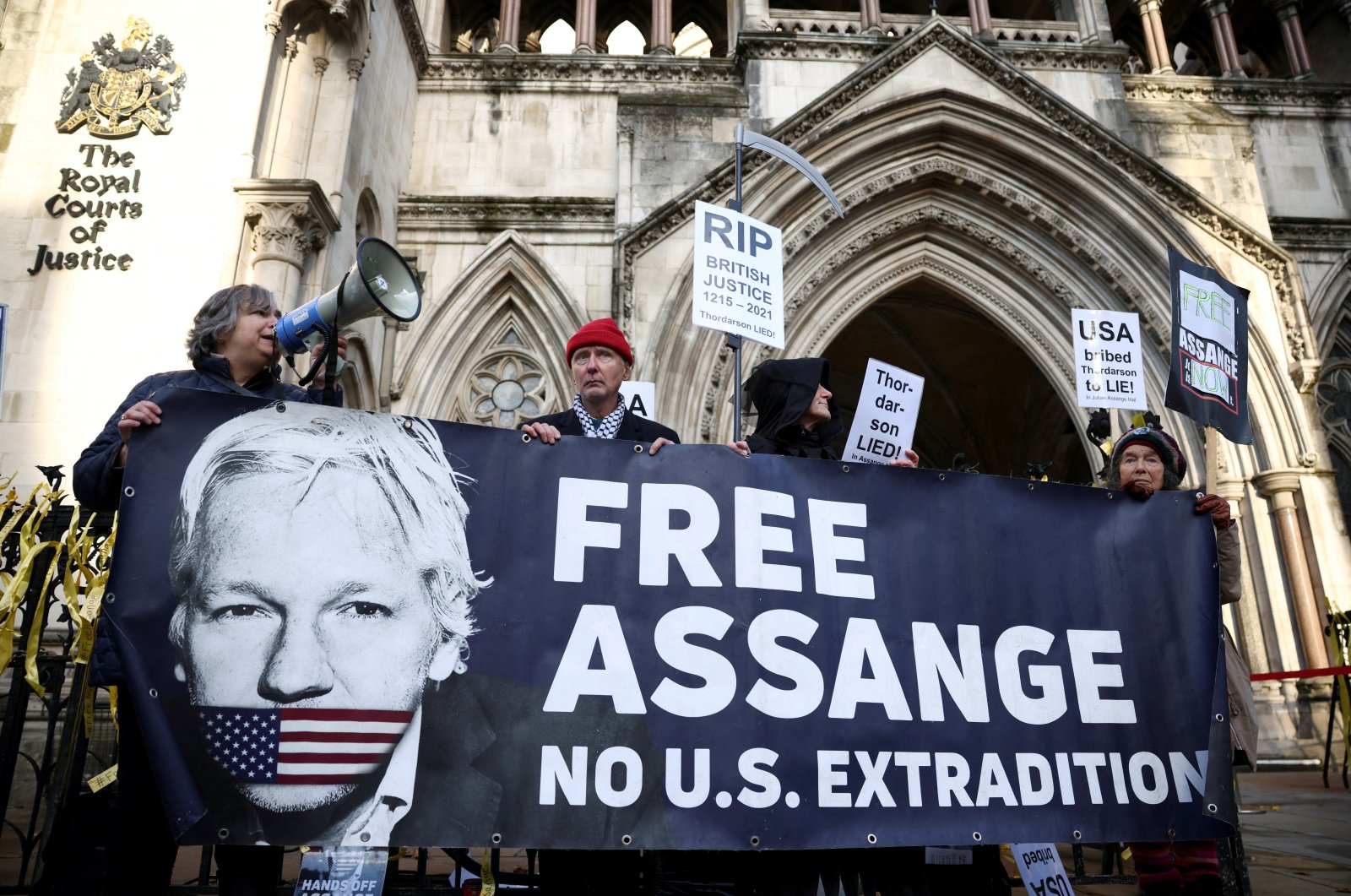 Supporters of Julian Assange display signs and a banner, outside the Royal Courts of Justice in London, Britain, Dec. 10, 2021. (Reuters Photo)
by Agencies Dec 10, 2021 1:34 pm
RECOMMENDED

A British high court overturned Friday a mental health-based ruling that barred Wikileaks founder Julian Assange from facing a trial and possible sentencing in the United States, opening the door for his extradition.

"The court allows the appeal," Judge Timothy Holroyde said. He said the United States had given a package of assurances to Britain about the conditions of Assange's detention, including a pledge not to hold him in a so-called "ADX" maximum security prison in Colorado and that he would be transferred to Australia to serve his sentence if convicted.

The ruling brings Assange one step closer to being extradited but further hurdles remain.

Judge Holroyde said the case must now be remitted to Westminster Magistrates' Court with the direction judges send it to the British government to decide whether or not Assange should be extradited to the United States.

U.S. authorities accuse Australian-born Assange, 50, of 18 counts relating to Wikileaks’ release of vast troves of confidential U.S. military records and diplomatic cables, which they said had put lives in danger.

The U.S. was appealing a Jan. 4 ruling by a London district judge that Assange should not be extradited because he would likely commit suicide in a U.S. prison.

The U.S. challenged the notion that Assange's mental health made him too vulnerable to withstand the U.S. judicial system. Lawyer James Lewis said Assange "has no history of serious and enduring mental illness" and does not meet the threshold of being so ill that he cannot resist harming himself.

U.S. authorities have told British judges that if they agree to extradite Assange, he could serve any U.S. prison sentence he receives in his native Australia.

U.S. prosecutors have indicted Assange on 17 charges of espionage and one charge of computer misuse over WikiLeaks' publication of thousands of leaked military and diplomatic documents. The charges carry a maximum sentence of 175 years in prison, although Lewis said: "The longest sentence ever imposed for this offense is 63 months."

Assange spent nearly seven years at the Ecuadorian Embassy in London before his asylum was scrapped, and he was handed to British police officers. The 50-year-old is currently being held at London's high-security Belmarsh Prison.

WikiLeaks came to prominence when it published a U.S. military video in 2010 showing a 2007 attack by Apache helicopters in Baghdad that killed a dozen people, including two Reuters news staff. It then released thousands of secret classified files and diplomatic cables.

U.S. prosecutors and Western security officials regard Assange as a reckless and dangerous enemy of the state whose actions imperiled the lives of agents named in the leaked material.

But supporters cast Assange as an anti-establishment hero who has been victimized by the United States for exposing U.S. wrongdoing in Afghanistan and Iraq.