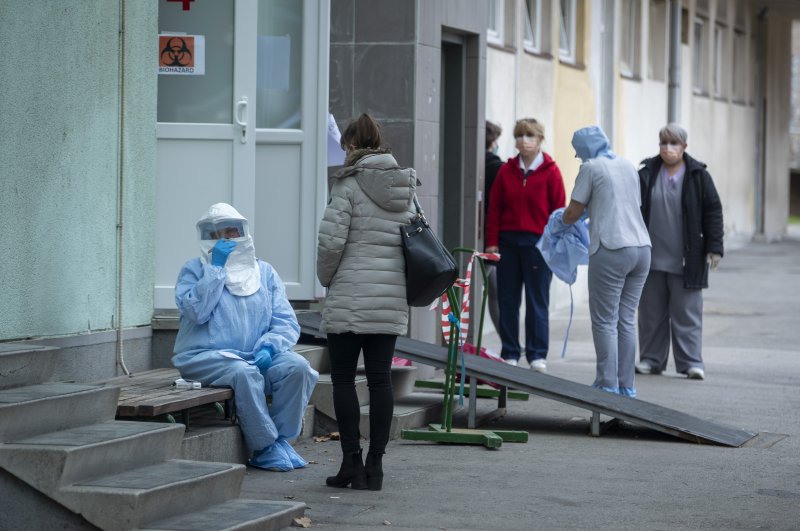 Fresh infections emerged globally linked to European hotspot Italy as the coronavirus epidemic has reached Latin America following Asia, Europe and the Middle East. The first positive virus test was confirmed Wednesday in Brazil from a resident who just returned from Italy. As the head of the U.S. Centers for Disease Control and Prevention called it a rapidly escalating epidemic in multiple locations, coronavirus cases in people who traveled recently to northern Italy have now been found in Greece, France, Spain, Austria, Switzerland, Romania, Croatia and Algeria.

As Italy has become Europe's worst-affected country, with more than 300 cases and 11 deaths, neighboring countries have been on high alert. Several European countries have announced their first coronavirus cases, all apparently linked to the growing outbreak in Italy. Austria, Switzerland and Croatia earlier this week reported their first cases of the virus, all involving people who had recently come from Italy. Austria sealed off an apartment complex where a female tourist from Italy with a possible infection died Tuesday while two new cases in the south-western German city of Tuebingen was confirmed on Wednesday, bringing to three the number of cases confirmed in the state of Baden-Wuerttemberg over the past two days.

In neighboring France, a second person suffering from the coronavirus died and a Frenchman who had traveled to Italy's Lombardy region had also tested positive, the country's health authorities said Wednesday. The death was one of three new cases in France this week, bringing the total confirmed cases in the country to 17. The French government has asked citizens returning from Lombardy and the neighboring Veneto region to avoid "all non-essential outings" and keep their children home from school. The same recommendations have been issued from people returning from mainland China, Hong Kong, Macau, Singapore and South Korea.

The new coronavirus is believed to have originated in a market selling wildlife in the Chinese city of Wuhan late last year and has infected about 80,000 people and killed more than 2,700, the vast majority in China.

Raising the most concern on that score in the Middle East, Iran emerged as a major hotspot, with at least 19 deaths reported across the country Wednesday. The latest health ministry figures show the virus has spread to all four corners of the country. Newly hit regions include southwestern Khuzestan, Lorestan in the west, Semnan in central Iran, the southern province of Hormozgan, and Sistan and Baluchistan as well as Kohgiluyeh and Boyerahmad in the southeast. But despite the rapid spread of coronavirus, authorities have so far dismissed quarantine as an option to control the outbreak.

Several of Iran's neighbors have closed their borders and banned flights from Iran due to fears over the virus, which could hurt Iran's already fragile economy. Iraq, Bahrain, Oman, Lebanon, the United Arab Emirates and Afghanistan have all reported cases of coronavirus involving people who traveled to Iran. Kuwait's health ministry said on Twitter on Wednesday that the number of people diagnosed with coronavirus in the country had risen to 25 after 13 more cases were confirmed. The ministry also said in a statement that the new cases were related to people traveling to Iran. Afghanistan, Iraq and Oman also announced their first cases of the virus on Monday and connected them to travel with Iran. Bahrain confirmed three new cases on Wednesday, raising the total number of infections to 26.

With porous borders, creaking hospitals and large illiterate populations, Afghanistan and Pakistan face a potentially devastating health crisis after the new coronavirus erupted in neighboring Iran. Islamabad has closed official border crossings while Kabul has suspended all travel to Iran, which has reported 15 deaths out of nearly 100 infections, making it one of the hardest-hit countries outside the virus epicenter China. But experts fear the measures could prove ineffective with thousands of people – refugees fleeing violence, Shiite pilgrims, smugglers and migrants looking for work – likely crossing the long, poorly patrolled frontiers every day.