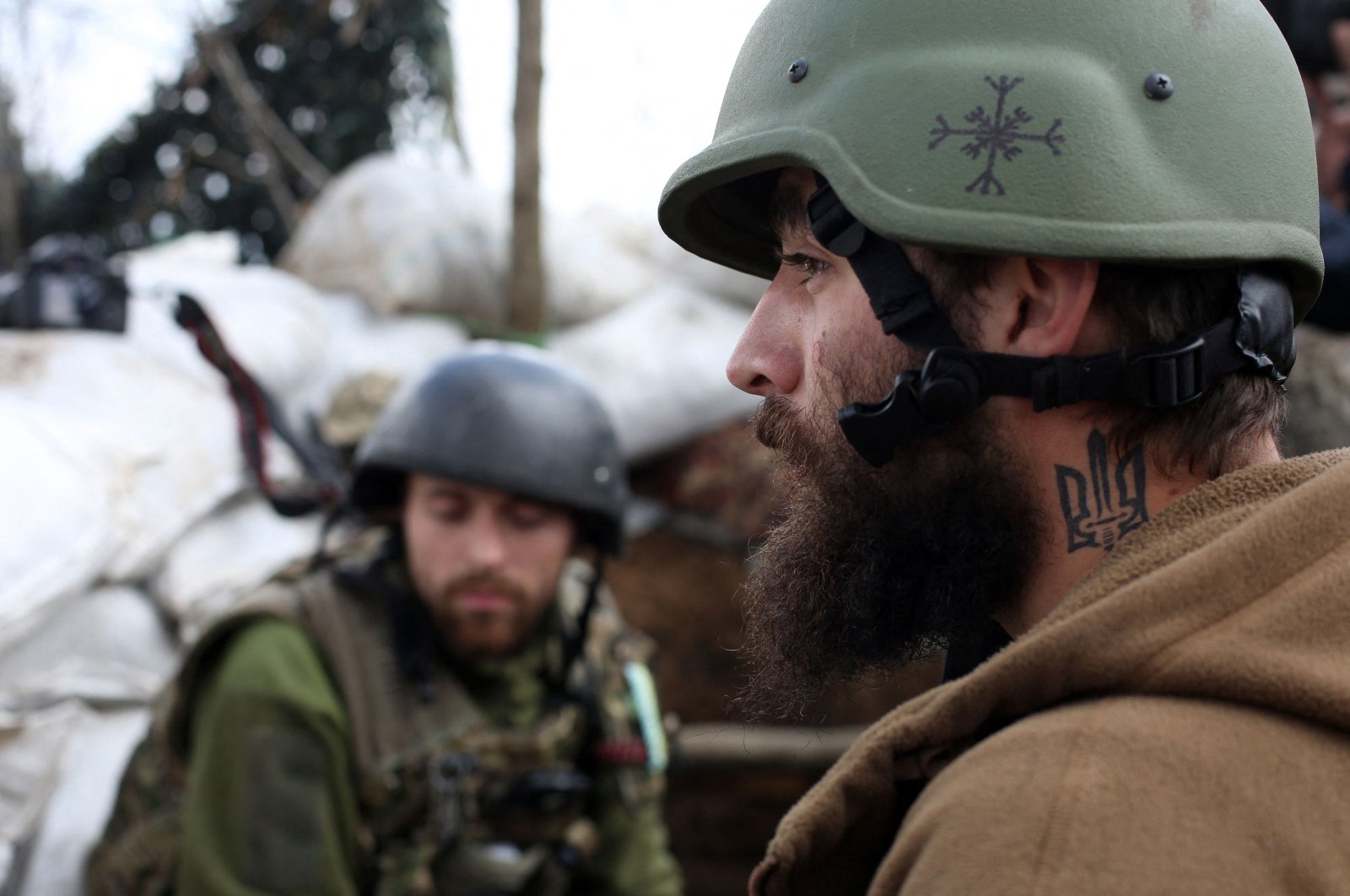 A Ukrainian serviceman with a tattoo of Ukraine's coat of arms stands at his position on the front line with Russia-backed separatists, not far from Donetsk, Ukraine, April 22, 2021. (AFP Photo)
by Associated Press Apr 22, 2021 6:54 pm
RECOMMENDED

Ukrainian President Volodymyr Zelenskiy welcomed the news of Russia's withdrawal from Kyiv late Thursday as the Kremlin ordered troops back to their permanent bases following massive drills but said that they should leave their weapons behind in western Russia for another exercise later this year.

After watching the drills, Russian Defense Minister Sergei Shoigu declared the maneuvers in Crimea and wide swathes of western Russia over and ordered the military to pull the troops that took part in them back to their permanent bases.

“I consider the goals of the snap check of readiness fulfilled,” Shoigu said. “The troops have shown their capability to defend the country and I decided to complete the drills in the South and Western military districts.”

Shoigu said the troops should return to their bases by May 1, but he ordered to keep the heavy weapons deployed to western Russia as part of the drills for another massive military exercise later this year.

Shoigu said they should remain at the Pogonovo firing range in the southwestern Voronezh region. The sprawling range is located 160 kilometers (about 100 miles) east of the border with Ukraine.

The Russian troop buildup near Ukraine that came amid increasing violations of a cease-fire in Ukraine’s east has raised concerns in the West, which urged the Kremlin to pull its forces back.

The U.S. and NATO have said that the Russian buildup near Ukraine was the largest since 2014, when Russia annexed Crimea and threw its support behind separatists in Ukraine’s eastern industrial heartland called Donbas.

“The reduction of troops on our border proportionally reduces tension,” Zelenskiy said on Twitter. He noted that Ukraine remains vigilant, but “welcomes any steps to decrease the military presence and deescalate the situation in Donbas.”

Putin responded in televised remarks Thursday, saying that if the Ukrainian leadership wants to settle the conflict in Donbas, it should first engage in talks with separatist leaders in the east and only after that discuss it with Russia. If Zelenskiy wants to discuss normalizing ties with Russia, he's welcome to come to Moscow, the Russian leader said.

The Russian military hasn't reported the number of additional troops that have been moved to Crimea and parts of southwestern Russia near Ukraine, and it wasn't immediately clear from Shoigu's statement if all of them will now be pulled back.

The Russian Defense Ministry said the maneuvers in Crimea involved more than 60 ships, over 10,000 troops, around 200 aircraft and about 1,200 military vehicles.

The exercise featured the landing of more than 2,000 paratroopers and 60 military vehicles on Thursday. Fighter jets covered the airborne operation.

Shoigu flew in a helicopter over the Opuk firing range in Crimea to oversee the exercise. He later declared the drills over but ordered the military to stand ready to respond to any “adverse developments" during NATO's Defender Europe 2021 exercise. The NATO drills began in March and are to last until June.

“NATO has significantly intensified its military activities in the region,” Shoigu said. “Intelligence gathering has increased and the intensity and scope of operational training has been growing. One of the alliance's main coalition groups is being deployed in the Black Sea region."

Russia for long has bristled at the deployment of NATO's forces near its borders and stepped up its drills as relations with the West have sunk to post-Cold War lows over the annexation of Crimea, Russian meddling in elections, hacking attacks and other issues.

Last week, Russia has announced that it would close broad areas of the Black Sea near Crimea to foreign navy ships and state vessels until November, a move that drew Ukrainian protests and raised Western concerns. Russia also announced restrictions on flights near Crimea this week, arguing that they fully conform with the international law.

Ukrainian Foreign Minister Dmytro Kuleba warned Tuesday that the Russian buildup across the border is continuing and is “expected to reach a combined force of over 120,000 troops” in about a week and urged the West to beef up sanctions against Moscow.

Moscow has rejected Ukrainian and Western concerns about the buildup, arguing that it’s free to deploy its forces anywhere on the Russian territory and charging that they don’t threaten anyone. But at the same time, the Kremlin sternly warned Ukrainian authorities against trying to use force to retake control of the rebel east, where seven years of fighting have killed more than 14,000, saying that Russia could be forced to intervene to protect civilians in the region.

Amid the tensions, Ukraine's president on Wednesday signed a law allowing the call-up of reservists for military service without announcing a mobilization. The new law will allow to quickly equip the military with reservists, "significantly increasing their combat effectiveness during military aggression,” Zelenskiy’s office said in a statement.