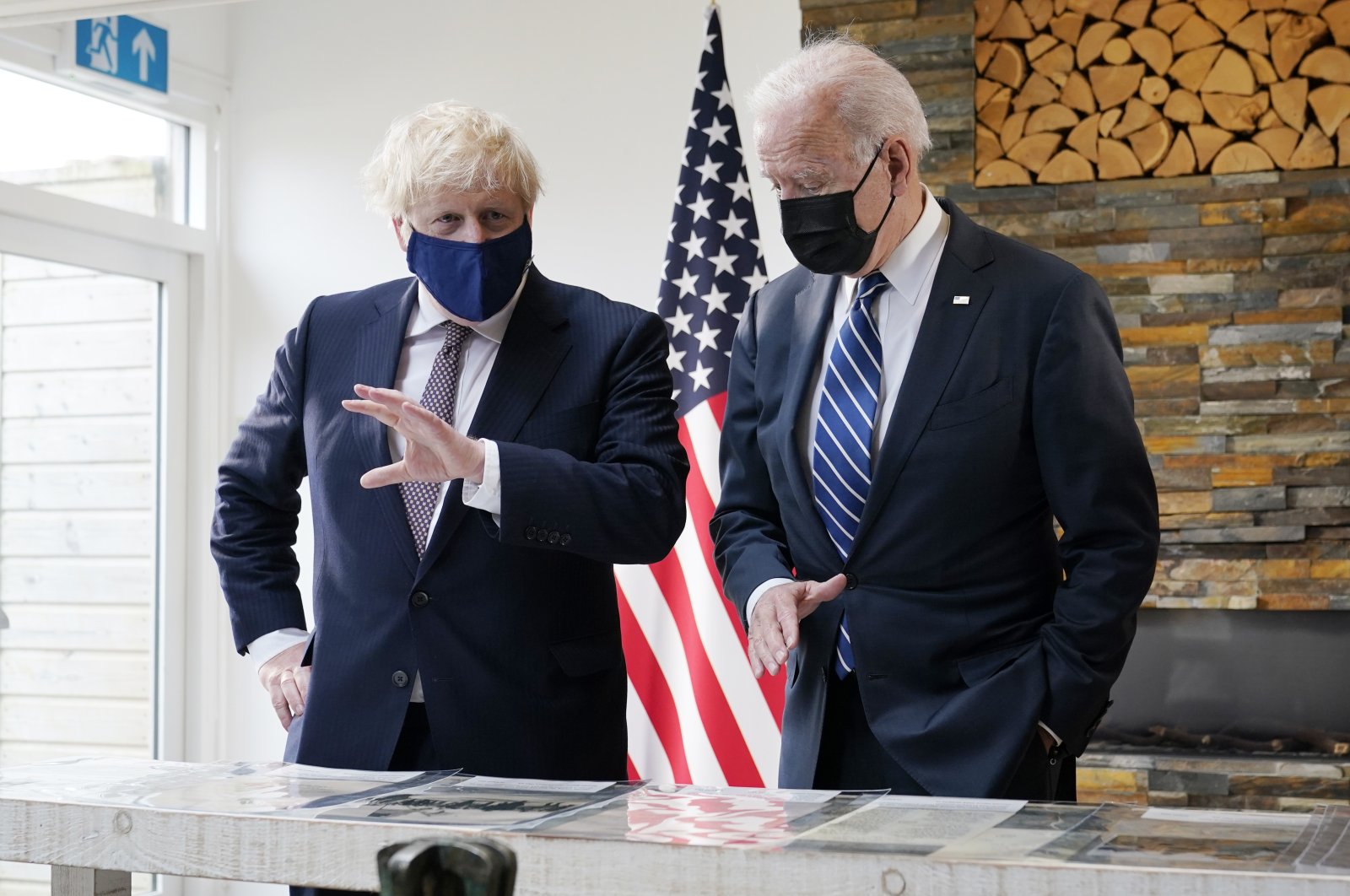 U.S. President Joe Biden and British Prime Minister Boris Johnson look at copies of the Atlantic Charter, during a bilateral meeting ahead of the G-7 summit, in Carbis Bay, England, June 10, 2021. (AP Photo)
by ASSOCIATED PRESS Jun 11, 2021 10:41 am
RECOMMENDED

As world leaders from the G-7 nations prepare to meet Friday they are expected to pledge at least 1 billion coronavirus shots for poor and struggling countries, with half of them coming from the United States and 100 million from the United Kingdom.

Vaccine sharing commitments from U.S. President Joe Biden and British Prime Minister Boris Johnson set the stage for the G-7 leaders’ meeting in southwest England, where leaders will pivot Friday from opening greetings and a “family photo” directly into a session on “Building Back Better From COVID-19.”

“We’re going to help lead the world out of this pandemic working alongside our global partners,” Biden said, adding that the G-7 nations would join the U.S. in outlining their vaccine donation commitments at the three-day summit. The G-7 also includes Canada, France, Germany, Italy and Japan.

The leaders meeting in the resort of Carbis Bay hopes to energize the global economy as well. On Friday they are set to formally embrace a global minimum tax of at least 15% on corporations, seconding an agreement reached a week ago at a meeting of their finance ministers. The minimum is meant to stop companies from using tax havens and other tools to avoid taxes.

It represents a potential win for the Biden administration, which has proposed a global minimum tax as a way to pay for infrastructure projects, in addition to creating an alternative that could remove some European countries’ digital services taxes that largely hit U.S. tech firms.

For Johnson, the first G-7 summit in two years – last year’s was scuttled by the pandemic – is a chance to set out his vision of a post-Brexit “Global Britain” as a midsized country with an outsized role in international problem-solving.

It is also an opportunity to underscore the U.K-U.S. bond, an alliance often called the “special relationship.”

After a meeting with Biden that both sides hailed as a success, Johnson said he prefers the term “indestructible relationship.”

The official summit business starts Friday, with the customary formal greeting and a socially distanced group photo. Later the leaders will meet Queen Elizabeth II and other senior royals at the Eden Project, a lush, domed eco-tourism site built in a former quarry pit

The G-7 leaders have faced mounting pressure to outline their global vaccine-sharing plans, especially as inequities in supply around the world have become more pronounced. In the U.S., there is a large vaccine stockpile and the demand for shots has dropped precipitously in recent weeks.

Biden said the U.S. will donate 500 million COVID-19 vaccine doses and previewed a coordinated effort by the advanced economies to make vaccination widely and speedily available everywhere. The commitment was on top of 80 million doses Biden has already pledged to donate by the end of June.

Johnson, for his part, said the first 5 million U.K. doses would be shared in the coming weeks, with the remainder coming over the next year. He said he expected the G-7 to commit to 1 billion doses in all.

“At the G-7 Summit I hope my fellow leaders will make similar pledges so that, together, we can vaccinate the world by the end of next year and build back better from coronavirus,” Johnson said in a statement, referencing a slogan that he and Biden have both used.

French President Emmanuel Macron welcomed the U.S. commitment and said Europe should do the same. He said France would share at least 30 million doses globally by year’s end.

At a news conference, he said time was of the essence.

“It’s almost more important to say how many (doses) we deliver the next month than making promises to be fulfilled in 18 months from now,” he said.

Biden predicted the U.S. doses and the overall G-7 commitment would “supercharge” the global vaccination campaign, adding that the U.S. doses come with no strings attached.

“Our vaccine donations don’t include pressure for favors or potential concessions,” Biden said. “We’re doing this to save lives, to end this pandemic, that’s it ... Our values call on us to do everything that we can to vaccinate the world against COVID-19.″

The U.S. commitment is to buy and donate 500 million Pfizer doses for distribution through the global COVAX alliance to 92 lower-income countries and the African Union, bringing the first steady supply of mRNA vaccine to the countries that need it most.

The Pfizer agreement came together with some urgency in the last four weeks at Biden’s direction, said a senior White House official, both to meet critical needs overseas and to be ready for the announcement at the G-7. The official, who spoke on condition of anonymity to discuss internal plans, added that the Biden administration was to apply the same wartime posture applied to the vaccine rollout in the U.S. to its effort to share vaccines globally.

Biden said the 500 million U.S.-manufactured vaccines will be shipped starting in August, with the goal of distributing 200 million by the end of the year. The remaining 300 million doses would be shipped in the first half of 2022. A price tag for the doses was not released, but the U.S. is now set to be COVAX’s largest vaccine donor in addition to its single largest funder with a $4 billion commitment.

The well-funded global alliance has faced a slow start to its vaccination campaign, as richer nations have locked up billions of doses through contracts directly with drug manufacturers. Biden’s move, officials said, was meant to ensure a substantial amount of manufacturing capacity remains open to the wealthy nations. Just last month, the European Commission signed an agreement to purchase as many as 1.8 billion Pfizer doses in the next two years, a significant share of the company’s upcoming production – though the bloc reserved the right to donate some of its doses to COVAX.

White House officials said the ramped-up distribution program fits a theme Biden plans to hit frequently during his week in Europe: that Western democracies, and not authoritarian states, can deliver the most good for the world.

Biden, in his remarks, harked back to the Detroit-area workers who 80 years ago built tanks and planes “that helped defeat the threat of global fascism in World War II.”

“They built what became known as the arsenal of democracy,” Biden said. “Now a new generation of American men and women, working with today’s latest technology, is going to build a new arsenal to defeat the current enemy of world peace, health and stability: COVID-19.”

China and Russia have shared their domestically produced vaccines with some needy countries, often with hidden strings attached. Sullivan said Biden “does want to show – rallying the rest of the world’s democracies – that democracies are the countries that can best deliver solutions for people everywhere.”