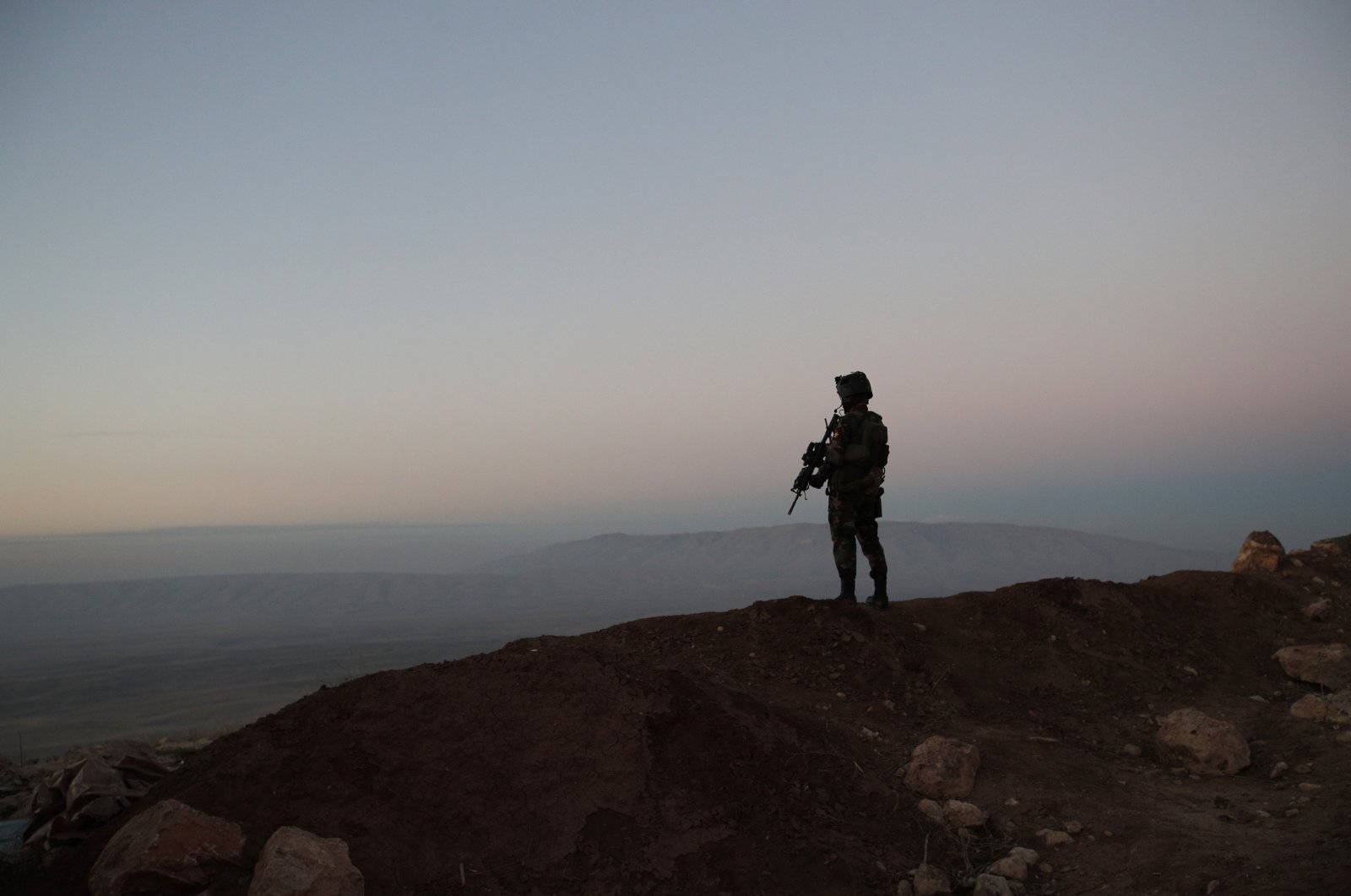 A Kurdish Peshmerga soldier is silhouetted while French President Francois Hollande visits a military outpost on the outskirts of the formerly Daesh-held city of Mosul, outside the city of Irbil, Iraq, Jan. 2, 2017. (AP File Photo)
by Agencies Dec 03, 2021 5:49 pm
RECOMMENDED

At least 12 people, including Peshmerga forces and civilians, were killed in an attack by Daesh terrorists on a village in northern Iraq.

"A group of Daesh/ISIS elements attacked late Thursday evening the village of Khadirjija at the foot of Mount Qarachokh, in Makhmour District of Nineveh Governorate, located 50 kilometers (31 miles) south of Erbil," the Peshmerga ministry said in a statement Friday.

It noted that the armed attack had initially killed three civilians, while the seven Peshmerga forces were killed by an explosive device planted by Daesh during confrontations with the terrorist group in retaliation for the civilians' deaths.

On Thursday evening, a source in the Peshmerga forces told Anadolu Agency (AA) that the attack on the village of Khadirjija had killed three sons of the village's chief.

Masrour Barzani, prime minister of the Kurdistan Regional Government (KRG), offered condolences to the families of the dead in a statement Friday. He said Daesh has become “a real threat” in territories disputed between the KRG region and the federal government in Baghdad.

This requires “strong and firm cooperation between the Peshmerga, the Iraqi army and the (United States-led) international coalition as soon as possible,” to stop Daesh's expansion and organization.

Makhmour is located across a band of disputed territory in northern Iraq where Daesh terrorists have exploited security gaps to launch attacks.

There was no claim by Daesh for Thursday night's attack and details were not immediately available.

Last Saturday, Daesh terrorists launched an armed attack on a Peshmerga post in the Koljo district of the Garmyan administration in the KRG, killing six people.

Attacks blamed on Daesh fighters have escalated in Iraq in recent months, especially in the provinces of Salahuddin, Diyala and Kirkuk.

Daesh was defeated on the battlefield in 2017 but attacks targeting Iraqi security forces – including Peshmerga fighters – remain common. Terrorists are still active through sleeper cells in many areas, especially across a band of territory in the north under dispute between federal Iraq and the semi-autonomous Kurdistan Regional Government.

The U.S.-led coalition to defeat Daesh has announced the end of its combat mission and said troops will withdraw from Iraq by the end of December. Advisers will remain to continue to train Iraqi forces.