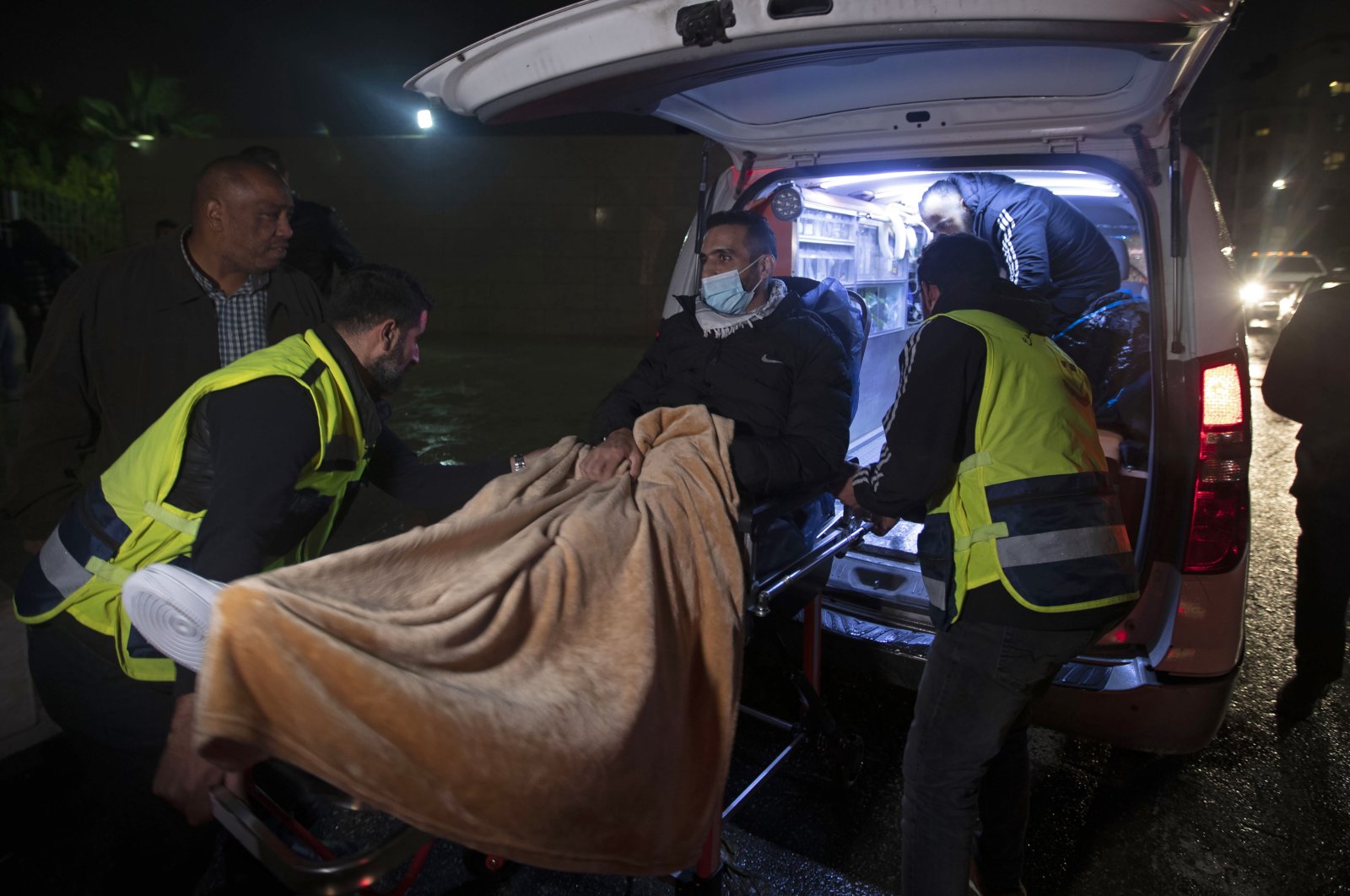 Former Palestinian prisoner Khaled Fasfous is taken out of an ambulance at the tomb of Palestinian leader Yasser Arafat, in the occupied West Bank city of Ramallah, Palestine, Dec. 5, 2021. (AP Photo)
by ASSOCIATED PRESS Dec 10, 2021 12:26 pm

Released from Israeli prisons, Palestinians are suffering mentally and physically from the prolonged hunger strikes that left them unable to return to normal life and must now rely on long-term medical care

A year after being released from an Israeli prison following a 103-day hunger strike, Maher al-Akhras is barely able to walk. Frequent bouts of dizziness and sensitivity to noise mean he can neither enjoy social occasions nor return to work on his ancestral farm in the occupied West Bank.

Back home, he is seen as a hero of the Palestinian cause, one of a small group of hunger strikers who has secured release from Israeli detention. But the mental and physical damage from the prolonged hunger strike has left him and others like him unable to resume normal lives and reliant on long-term medical care.

Palestinian prisoners have long used hunger strikes to pressure Israel to improve the conditions of their detention or to secure their release after being held without charges for months or years under a policy known as administrative detention.

Israel is currently holding some 4,600 Palestinians, including individuals arrested at protests or for throwing stones. Around 450 Palestinians are currently being held in administrative detention, and in the last two years, at least 11 have used prolonged hunger strikes to secure an early release.

Israel defends administrative detention, saying that it is needed to prevent attacks or to keep dangerous suspects locked up without sharing evidence that could endanger valuable intelligence sources. Al-Akhras has been tried and convicted twice in military courts for his involvement with the Palestinian resistance group Islamic Jihad, which Israel considers a terrorist organization.

Palestinians and rights groups say administrative detention denies prisoners the right to due process, allowing them to be held indefinitely without seeing the evidence against them or even getting a trial in military courts. The 2.5 million Palestinians in the West Bank, even those in areas administered by the Palestinian Authority (PA), live under Israeli military rule.

Lengthy hunger strikes draw international attention and stoke protests in the occupied territories, putting pressure on Israel to meet the prisoners' demands. The death of a hunger striker in custody would likely spark wider unrest and demonstrations among Palestinians.

"Hunger strikes are particularly effective in the case of administrative detainees because this is a detention completely outside of the judicial process,” said Jessica Montell, director of HaMoked, an Israeli human rights group.

As hunger strikers' health deteriorates, they are transferred to Israeli hospitals under guard. They drink water, and medics encourage them to take vitamins, but many, like al-Akhras, refuse. No Palestinian in Israeli detention has died as a result of hunger strikes, but doctors say prolonged vitamin deficiency can cause permanent brain damage.

"If a person has severe vitamin B deficiency, they can develop chronic neurological problems including vertigo, dizziness, sluggish thinking and severe memory problems,” said Dr. Bettina Birmanns, a neurologist and the director of the Public Committee Against Torture in Israel, a local rights group. Prolonged periods of starvation will also cause the body to eat away at proteins from the skeleton and heart, she said.

A year after his release from administrative detention, al-Akhras says he has regained all the weight he lost but struggles to read or walk in a straight line.

Ahmed Ghannam, a former car dealer from the southern West Bank, went on a nearly 100-day hunger strike in 2019 to protest against his fourth stint in administrative detention. He had previously been convicted twice for his involvement with another Palestinian resistance group Hamas, which rules in the blockaded Gaza Strip. After his release, he was diagnosed with weakened heart muscle and the early stages of Type 2 diabetes.

Critics say Israel is careful to ensure that the hunger strikers do not become martyrs, either by giving into their demands once they are incapacitated or by taking emergency measures that can include force-feeding. Force-feeding patients who are mentally sound is widely seen by medical professionals as a violation of patient autonomy akin to torture.

During the 1970s and 1980s, several Palestinian hunger strikers died after being force-fed by the Israeli authorities, resulting in the practice being outlawed. However, an Israeli law passed in 2015 over the objections of the medical community allows a judge to sanction force-feeding in some circumstances. It's unclear if the law has ever been invoked.

Shany Shapiro, the spokesperson for Israel’s Kaplan hospital, said force-feeding has never been used on any hunger strikers that have been transferred there and that other life-saving treatments are preferred, such as infusions.

"Before any form of intervention is undertaken, there is an ethics committee that takes into account the wants of the prisoner,” she said.

Before reaching that point, former prisoners say agents from Israel's internal security service, the Shin Bet, visited their hospital rooms and pressed them to end their strikes. Ghannam and al-Akhras say agents tempted them with food and threatened them with home demolitions or travel restrictions for family members.

The Shin Bet did not respond to a request for comment.

Marathon hunger strikers receive a hero's welcome back home, where they are seen as icons of resilience in the face of a 54-year occupation with no end in sight. Kayed Fasfous, who led a five-man hunger strike and was released last month, has since done a string of TV interviews.

Al-Akhras also became a local celebrity. "People stop me in the street and ask for pictures,” he said.

But for most hunger strikers, the fame quickly fades while the health consequences linger.

Anani Sarahneh, the spokesperson for the Palestinian Prisoners Club, which represents former and current prisoners, said it is providing support for around 60 former hunger strikers with various psychological and medical ailments.

Ghannam, who was released in 2019, said he has struggled to find steady employment to support his wife and two young sons, alongside his mounting medical bills.

"I don’t regret my decision, but I regret the other problems it has caused," he said.