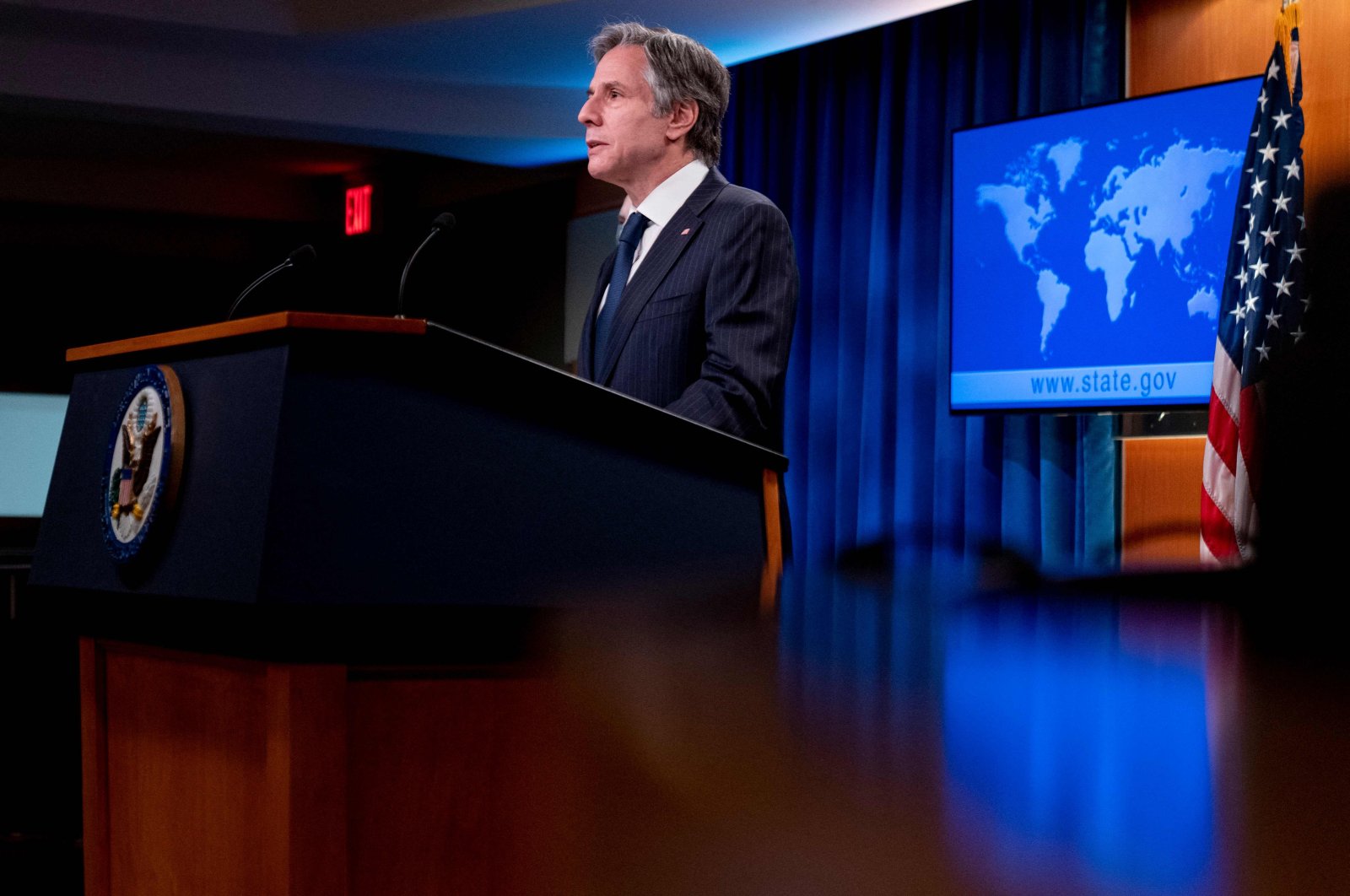 U.S. Secretary of State Antony Blinken speaks at a news conference to announce the annual International Religious Freedom Report at the State Department in Washington, D.C., U.S., on May 12, 2021. (AFP Photo)
by Daily Sabah with AFP May 12, 2021 9:18 pm
RECOMMENDED

A U.S. envoy will be sent to the Middle East to help calm tensions, Secretary of State Antony Blinken said Wednesday while urging Israel to avoid further civilian deaths.

"He will urge on my behalf and on behalf of President Biden a de-escalation of violence," Blinken told reporters.

The top diplomat, in a call with Israel's Prime Minister Benjamin Netanyahu, again pushed for both sides to step back from the fighting.

Blinken "reiterated his call on all parties to de-escalate tensions and bring a halt to the violence," said a State Department statement.

News of that conversation emerged shortly after the Pentagon said Defense Secretary Lloyd Austin had called his Israeli counterpart, Benny Gantz, and backed Israel's "legitimate right to defend itself and its people" while also urging steps to restore calm.

A senior U.S. official separately said to expect further high-level contacts, including with Jordan and Egypt, although Washington does not speak to the Palestinian resistance movement Hamas, which it considers a terrorist group.

Blinken described scenes of dead Palestinian civilians, including children, as "harrowing" but defended Israel's aggressive attacks on Gaza in response to rocket fire by Hamas.

"I think Israel has an extra burden in trying to do everything they possibly can to avoid civilian casualties, even as it is rightfully responding in defense of its people," Blinken said.

But the diplomat said there was a "very clear and absolute distinction between a terrorist organization, Hamas, that is indiscriminately raining down rockets – in fact, targeting civilians – and Israel's response defending itself."

The tensions escalated when Israel launched devastating airstrikes on Gaza, including on civilian targets, to which Palestinian groups responded by firing rockets into Israel, which the U.S. administration sees as a move of aggression.

President Joe Biden's administration earlier appealed to ally Israel to reroute a flashpoint parade in Jerusalem and prevent evictions of Palestinians in the holy city, the immediate trigger for the new round of violence. Hamas had Monday warned Israel to withdraw all its forces from the Al-Aqsa Mosque compound and the East Jerusalem district of Sheikh Jarrah, where the looming forced expulsion of Palestinian families has fueled the angry protests.

In a more nuanced approach than the militantly pro-Israel administration of Donald Trump, Blinken renewed U.S. support for the eventual creation of an independent Palestinian state.

"This violence takes us further away from that goal," Blinken said.

"We believe Palestinians and Israelis equally deserve to live with safety and security and will continue to engage with Israelis, Palestinians and other regional partners to urge de-escalation and to bring calm."