What is happening in Sheikh Jarrah of East Jerusalem?: Past and present 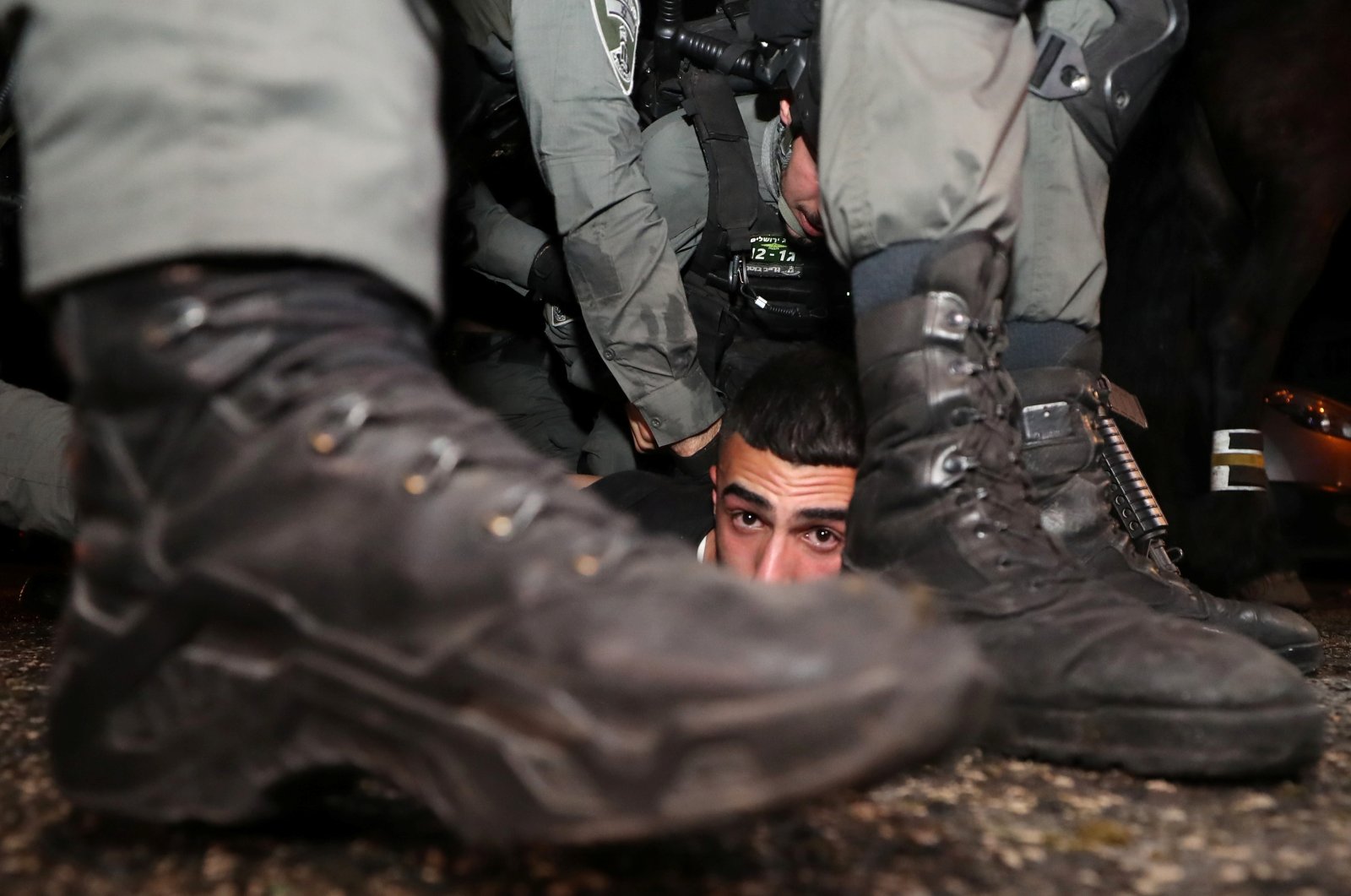 Israeli police detain a Palestinian amid ongoing tension and Israel's forced expulsion of Palestinians living in the Sheikh Jarrah neighbourhood of East Jerusalem, Palestine, May 5, 2021. (Reuters Photo)
by Anadolu Agency May 09, 2021 2:05 pm
RECOMMENDED

The international community has recently witnessed Israel's forced expulsion of Palestinian families from their homes in East Jerusalem's Sheikh Jarrah neighborhood and attacks on the Al-Aqsa Mosque compound during the holy month of Ramadan. Below is what needs to be understood from the historical perspective to understand the dramatic events unfolding as Israeli violence against Palestinians surges once again in occupied territories:

In the aftermath of the 1948 expulsion of Palestinians by Zionist gangs to pave way for the creation of the state of Israel, hundreds of thousands of Palestinians were forced to flee their homes in historical Palestine to neighboring countries.

Following these events, which came to be known to the Palestinians as "Nakba," or the Catastrophe, 28 families settled in the Sheikh Jarrah neighborhood in East Jerusalem in 1956, hoping that would be the last time they are forced out of their homes.

But these families, whose number has grown to 38 since then, say they are experiencing a renewed Nakba on a daily basis.

The Israeli Central Court in East Jerusalem approved a decision earlier this year to evict four Palestinian families from their homes in the Sheikh Jarrah neighborhood in favor of right-wing Israeli settlers.

Israel's Supreme Court was scheduled to issue a ruling on the evictions last Thursday amid heated demonstrations and clashes between Palestinians and Israeli settlers, but the decision was delayed until May 10.

In the event that the court rules in favor of the settlers, the Palestinian families will lose their homes. Other families will face a similar fate.

In 1956, the 28 refugee families who lost their homes during the Nakba reached an agreement with the Jordanian Ministry of Construction and Development and the U.N. refugee agency UNRWA to provide housing for them in Sheikh Jarrah. At the time, the West Bank was under Jordanian rule (1951-1967).

According to the Civic Coalition for Palestinian Rights in Jerusalem (CCPRJ), the Jordanian government provided the land while UNRWA covered the cost of building 28 homes for these families.

"A contract was concluded between the Ministry of Construction and Reconstruction and Palestinian families in 1956, with one of the main conditions stating that the residents pay a symbolic fee, provided that ownership is transferred to the residents after three years from the completion of construction,” the CCPRJ said in a statement.

This, however, was interrupted by the Israeli occupation of the West Bank, including Jerusalem, in 1967 which prevented the registration of the houses under the names of families, the statement said.

Last week, Jordan's Foreign Ministry said it had provided the Palestinian Ministry of Foreign Affairs with 14 ratified agreements meant for the people of the Sheikh Jarrah neighborhood in East Jerusalem which support their claim of their lands and property.

In a statement, the ministry said it handed over a certificate to the residents proving that the Jordanian Ministry of Construction and Development had concluded an agreement with UNRWA to establish 28 housing units in Sheikh Jarrah to be delegated and registered in the names of these families.

According to the statement, the process, however, was interrupted as a result of the Israeli occupation of the West Bank in 1967.

The ministry said it had previously provided the Palestinian side with all the documents that could help Jerusalemites maintain their full rights, including lease contracts, lists of beneficiaries' names and a copy of the agreement concluded with UNRWA in 1954.

Muhammad al-Sabbagh, a resident of the neighborhood, told Anadolu Agency (AA) that the suffering of the Palestinian families began in 1972 when the Sephardic Committee and the Knesset Committee of Israel claimed that they owned the land on which the houses were built in 1885.

In July 1972, the two Israeli associations asked the court to evict four families from their homes in the neighborhood accusing them of land grab, according to ​CCPRJ.

The Palestinian families appointed a lawyer to defend their rights, and in 1976 a verdict was issued by Israeli courts in their favor.

"However, the court, using a new registration made in the Israeli Land Registry Department, decided that the land belongs to the Israeli settlement associations,” al-Sabbagh said.

In 1970, the Law on Legal and Administrative Affairs in Israel was enacted, which stipulated, among other things, that Jews who lost their property in East Jerusalem in 1948 can reclaim their property.

The Israeli Peace Now movement says the law does not allow Palestinians to reclaim their property they lost in Israel in 1948, a move that proves the existence of a separate law for Jews and Palestinians.

According to al-Sabbagh, residents of Sheikh Jarrah were deceived by an Israeli lawyer assigned to defend them.

"In 1982, the Israeli settlement associations filed an eviction case against 24 families in the Sheikh Jarrah neighborhood," al-Sabbagh said, adding that 17 families assigned Israeli lawyer Tosia Cohen to defend them.

As the legal battle continued, al-Sabbagh said the lawyer in 1991 signed an agreement, without the knowledge of the families, that the ownership of the land belongs to the settlement associations.

"The residents of the neighborhood were instead granted a tenant status," al-Sabbagh added.

The lawyer, according to the CCPRJ, put Palestinian families "under the threat of eviction if they failed to pay the rent to the settlement associations."

In 1997, Suleiman Darwish Hijazi, a local resident, filed a lawsuit with the Israeli Central Court to prove his land ownership, using title deeds issued by the Ottoman Empire, which were brought from Turkey. The move, however, backfired when the court rejected the claim in 2005.

The court said the papers did not prove his land ownership and Hijazi's appeal in the following year was rejected.

For years, Israeli courts have heard cases submitted by settlement associations against Palestinian residents, as well as Palestinian appeals against court rulings issued in favor of settlers.

In November 2008, however, the al-Kurd family was evicted from their home, followed by the eviction of the Hanoun and al-Ghawi families in August 2009.

Their homes were taken over by settlers who were quick to raise Israeli flags on them, marking a new phase for the suffering of the Palestinians in the Sheikh Jarrah neighborhood.

So far, 12 Palestinian families in the neighborhood have received eviction orders issued by the Israeli central and magistrates courts.

Most recently, four Palestinian families filed a petition with the Supreme Court, Israel's highest judicial body, against a decision to expel them from their homes. The court is set to rule on the issue Monday.

Al-Sabbagh, who has a 32-member family including 10 children, is afraid that the court verdict will make him and his family refugees again.

In 1948, al-Sabbagh's family had fled their home in Jaffa, which is now inhabited by Israelis.

The Palestine-Israel conflict dates back to 1917, when the British government, in the now-famous Balfour Declaration, called for "the establishment in Palestine of a national home for the Jewish people."