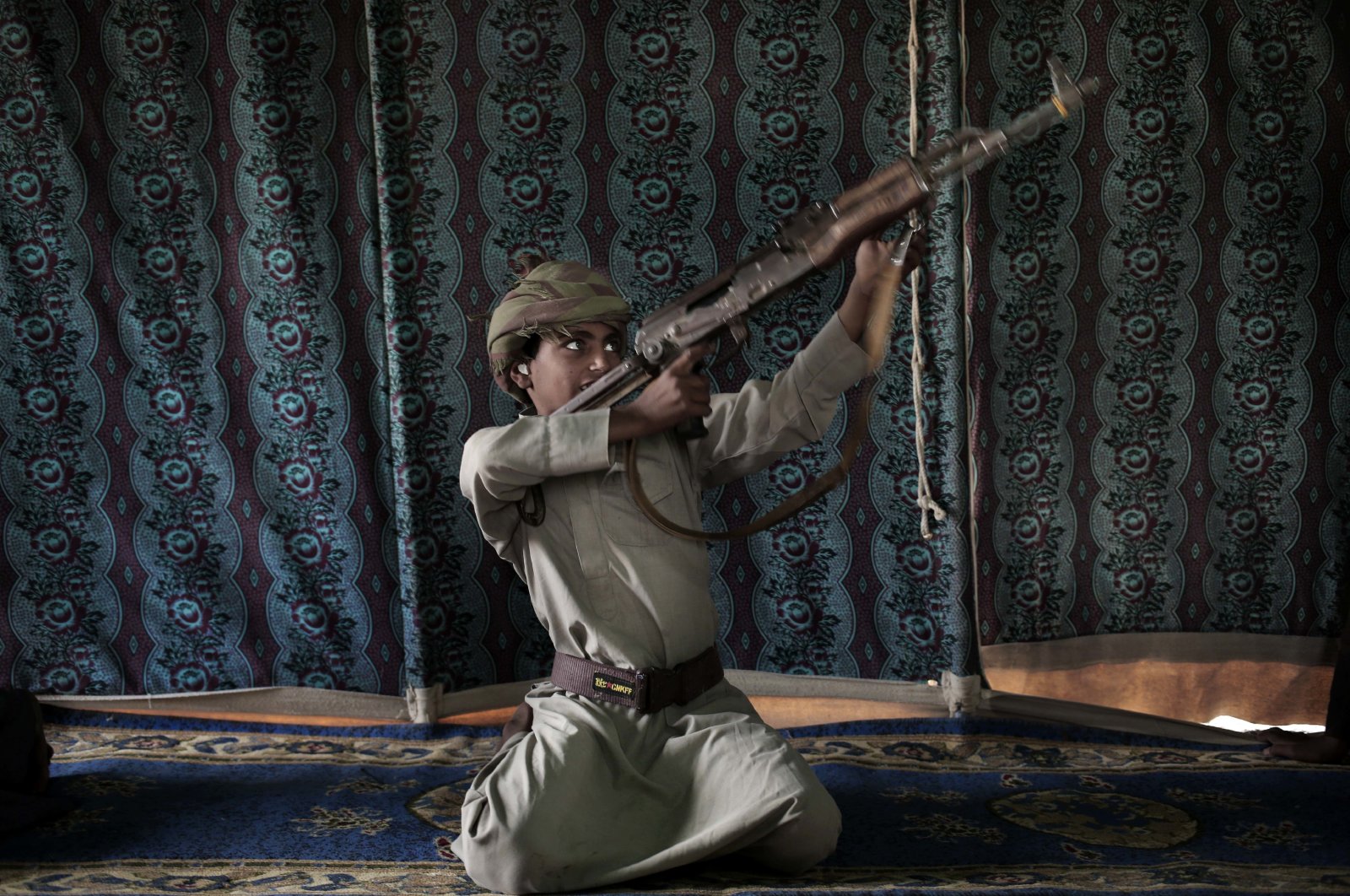 Kahlan, a 12-year-old former child soldier who fought alongside Houthi rebels, demonstrates how to use a weapon at a camp for displaced persons where he took shelter with his family in Marib, Yemen, July 27, 2018. (AP Photo)
by REUTERS
Feb 12, 2021 1:13 pm

More children could be pushed into joining armed groups in conflict zones as families face increasing poverty due to the COVID-19 pandemic, a top United Nations official warned Friday.

The exact number of child soldiers is unknown, but in 2019 alone about 7,740 children – some as young as 6 – were recruited and used as fighters or in other roles by mostly nonstate armed groups, according to U.N. data.

Speaking on the International Day against the Use of Child Soldiers – or Red Hand Day – the U.N. Special Representative for Children and Armed Conflict Virginia Gamba said that number was likely to rise as a result of coronavirus-related hardships.

"There is a real threat that as communities lack work, and are more and more isolated because of the socioeconomic impact of COVID-19, we're going to see an increase in the recruitment of children for a lack of options," she said.

"More and more children will be either attracted or sometimes told by their parents to just go and join because someone's got to feed them," she told the Thomson Reuters Foundation in a video call.

Girls and boys are still forced to join armed groups, as fighters or in roles such as cooks or for sexual exploitation, in at least 14 countries including the Democratic Republic of Congo, South Sudan and Somalia, the U.N. has said.

The U.N. called for a global cease-fire last year to help fight COVID-19, but armed groups have continued fighting and Gamba said the pandemic had also hampered efforts to protect children in conflict zones. She said she was concerned about a surge in attacks by terrorists against children in the Sahel and Lake Chad region, including kidnappings, killings and forced displacement, noting that COVID-19 was changing armed groups' tactics.

"As children are not in schools, therefore the target of attacking a school for abduction or recruitment of children ... is shifting to where the children are," she said. The pandemic has also delayed progress on implementing legislation in different countries to prohibit and criminalize the recruitment and use of children by armed forces and groups, Gamba said, calling for lawmakers to prioritize the issue.

"The issue of accountability is fundamental," she said.

But despite some worrying trends, progress on combating the use of child soldiers is being made, Gamba said.

In South Sudan, the number of violations against children including their recruitment as fighters has significantly declined over the past five years, according to her office's annual report. And last week, the International Criminal Court (ICC) convicted Dominic Ongwen, a commander of Ugandan Lord's Resistance Army rebels and former child soldier, of dozens of crimes including child abductions and murder.

Ongwen's conviction at The Hague-based court was applauded by the U.N., but Gamba said a concerted effort at the national level was the best way to stop children becoming soldiers. "In all our joint action plans with the government, and with the armed groups, we make it very, very clear we expect to see an oversight of the way their own officers, their own personnel are engaging in recruitment," she said.