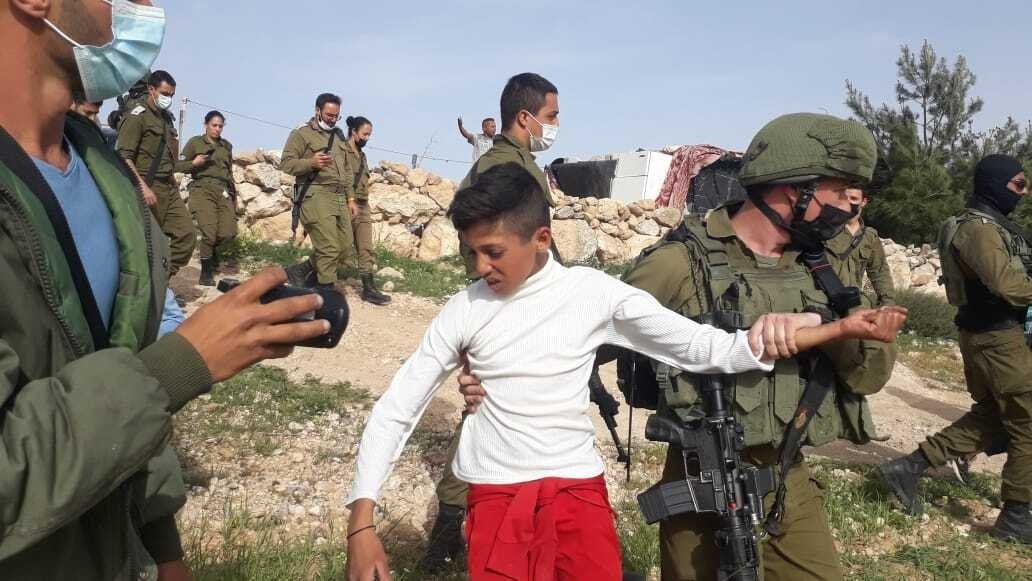 An Israeli soldier drags Palestinian boy as he detains him and four other children near a settlement outpost in Havat Maon, occupied West Bank, Palestine, March 11, 2021. (AA Photo)
by DAILY SABAH WITH AGENCIES Mar 12, 2021 11:55 am

Children, stripped of their innocence when playing in the street and picking vegetables, are the latest to be subjected to horror as a consequence of the conflict; with Israeli forces arresting the kids as they gathered wild artichokes near a settlement outpost in the occupied West Bank, holding them in detention for hours

Israeli troops detained five Palestinian children for several hours after they were confronted by Jewish settlers while gathering wild artichokes near a settlement outpost in the occupied West Bank, an Israeli human rights group said Thursday.

B'Tselem released video of the arrest, in which heavily armed Israeli soldiers can be seen pulling the children away by force. Footage shot earlier shows the children gathering plants near the settler outpost of Havat Maon, when two masked settlers emerge from a grove of trees.

"This is another example of the absolute disregard on the part of Israeli authorities and forces on the ground to the well-being and rights of Palestinians, no matter how young or vulnerable,” B'Tselem spokesperson Amit Gilutz said.

"The youngest boy from yesterday’s incident is 8 years old,” he added, according to The Associated Press (AP).

The children, whose ages range from 8 to 13, were held for around five hours, according to Gaby Lasky, a human rights lawyer who is representing them. The two oldest, who are 12 and 13, and therefore old enough to face charges, were ordered to return next week for more questioning. The Israeli military said "a number of suspects” were detained after they "infiltrated into a house's private property.” It said they were transferred to the Israeli police, who released them to their parents.

Havat Maon is one of the dozens of settler outposts established without Israeli government authorization, in addition to some 130 officially recognized settlements. The settlements, which range from remote hilltop outposts to full-fledged towns, are home to nearly a half million Israelis.

Lasky said it’s "crazy” to accuse the children of trespassing in an outpost that was built illegally.

"Harassment of young Palestinian children by Israeli settlers and their frequent arrest and detention by Israeli forces comprises a pattern of international law violations — and may also constitute repeated violations of US law to the extent US-sourced military equipment is used," says Dylan Williams, former U.S. Senate staffer and senior vice president of a nonprofit advocacy group J Street, adding that it aims to promote American leadership to end the Israeli-Palestinian conflicts peacefully and diplomatically.

Harassment of young Palestinian children by Israeli settlers and their frequent arrest and detention by Israeli forces comprises a pattern of international law violations — and may also constitute repeated violations of US law to the extent US-sourced military equipment is used https://t.co/Z9l4q4oqR9

A group of Israeli settlers opened fire on two Palestinian children in Masafer Yatta Thursday. Two children, 12 and 13 years old, were not injured in the attack. According to Rateb Jabour, coordinator of the Wall and Colonization Resistance Commission in Hebron, the settlers fired towards the children while they were grazing sheep in the area of Masafer Yatta in the occupied West Bank. Jabour told Palestinian news agency WAFA that they were able to leave to a safe haven.

Meanwhile, Israeli occupying forces raided the village of Karmel, which is also in the Masafer Yatta area, and stormed and ransacked the homes of local Palestinian residents, wreaking havoc. The Masafer Yatta area, composed of some 19 nomadic Bedouin villages, has been the target of attacks by the Israeli military and settlers who want to free the area from the indigenous population in order to expand its settlements. According to WAFA, there are reports of attacks by Israeli occupying forces or settlers on Palestinians in the area on an almost daily basis.

Many of the settler outposts have been established by religious nationalists who are hostile to the local Palestinian population. B'Tselem has reported a rise in settler violence in recent months and says the Israeli military often turns a blind eye.

Israel's treatment of Palestinian children in military detention has become a major area of concern for the international community. A nongovernmental organization (NGO) highlighted numerous rights violations in prisons, saying that more than 400 boys and girls were arrested by Israeli forces in the first 10 months of 2020.

"Israel is committing various violations against Palestinian children during their detention, including preventing them from completing their studies, depriving some of them of family visits in prison and isolating them in individual cells," the statement added, according to release carried by Anadolu Agency (AA).

According to PPS, since 2015 Israel has been passing new laws that legalize issuing children long prison sentences, in some cases up to life imprisonment. Palestinian figures show that around 4,400 Palestinians, including 39 women, 155 children and 700 sick patients, are currently held in Israeli detention facilities.

In its annual report in 2019, the PPS said that the children arrested by Israel experienced numerous rights violations. They are often taken from their homes, usually late at night under harsh conditions, the report said. It noted that the arrested children are deprived of their right to education, a clear violation of the Declaration of the Rights of the Child, and some of the children are denied family visits and proper medical treatment.

The coronavirus outbreak this year has brought heightened attention to the plight of the Palestinian children in Israeli prisons. Israel's perpetual violations of Palestinians' basic rights in its prisons, including torture, repression, assault and the denial of proper medical treatment, have long been under the spotlight. In March 2020, Israel's detention authority decided to reduce rations of bread, water and meat for Palestinian prisoners, exposing once again the ongoing systematic violations of human rights in Israeli jails.

The United Nations human rights body criticized Israel for its killings of protesters in Gaza and treatment of the Palestinians, declaring it a "war crime" under the Statute of Rome. The high casualty toll at the Gaza border triggered a diplomatic backlash against Israel and new charges of excessive use of force against unarmed protesters. The Israeli army has killed 25 Palestinian children in the occupied West Bank and the blockaded Gaza Strip in 2018.

Defense for Children International - Palestine asserted that Israeli forces had deliberately killed minors with live ammunition during protests. It states that this death toll includes 21 children targeted directly, 11 of whom were shot in the head or neck. The U.N. Children's Fund (UNICEF), said over 1,000 children were injured by Israeli forces in the besieged Gaza Strip during demonstrations.