Confusion as Bangladesh drops ‘except Israel’ from new passports 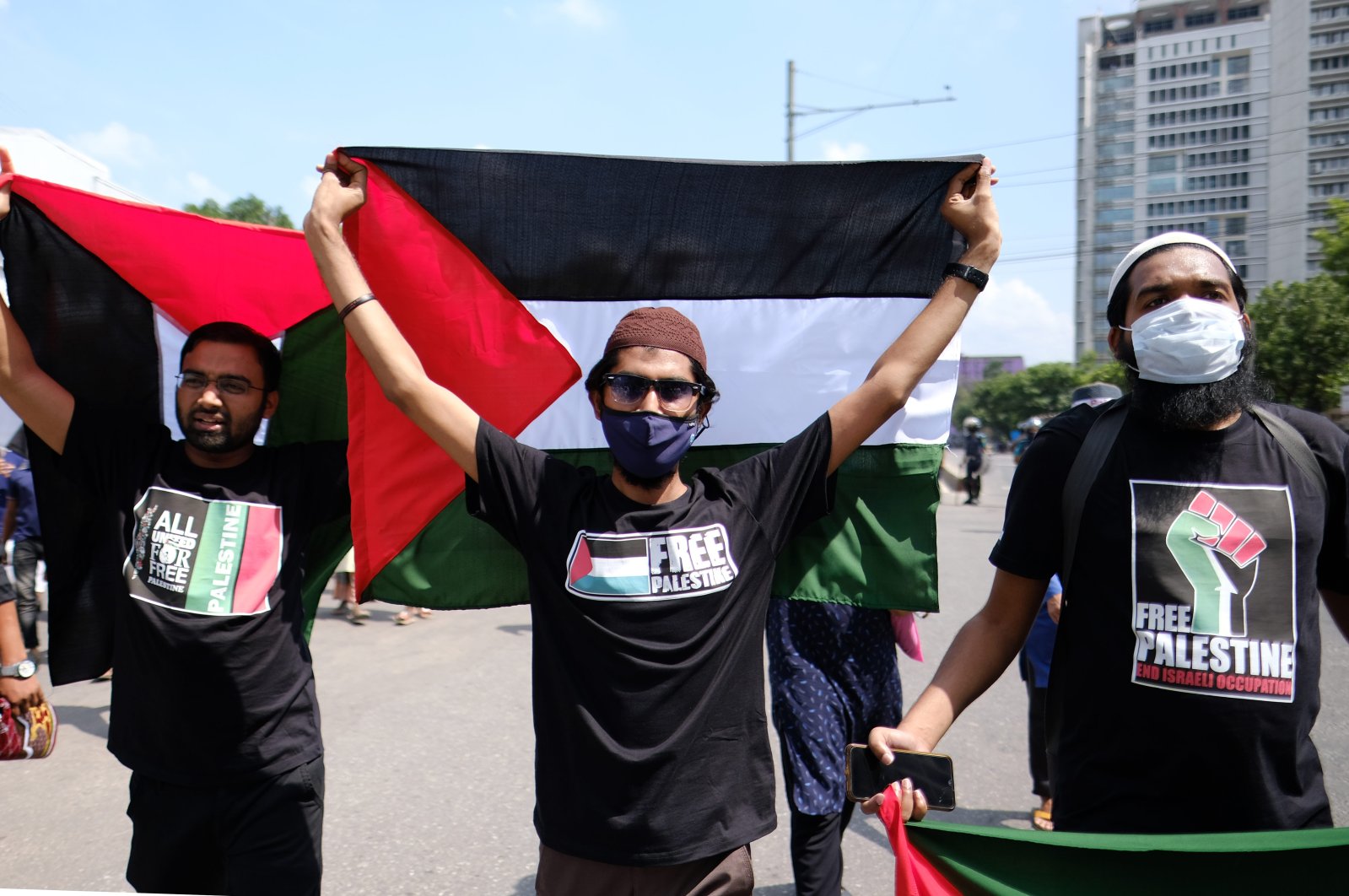 Bangladeshi men hold Palestinian flags as they participate in a protest against the Israeli attacks on Palestinians in Gaza, in Dhaka, Bangladesh, May 21, 2021. (AP Photo)
by Anadolu Agency May 24, 2021 9:50 am
RECOMMENDED

Bangladeshi passports will no longer feature the clause "valid for all countries of the world except Israel," officials confirmed Sunday.

Bangladeshi passports used to bear the text: "This passport is valid for all countries of the world except Israel," until a few months ago. Bangladesh has dropped the last two words, "except Israel," from electronic passports it now issues.

Since the South Asian Muslim majority country's establishment in 1971, Bangladesh has openly affirmed its position in favor of Palestine and stood against the Israeli oppression in the occupied Palestinian territories. During the very recent attacks on Palestinians by Israeli forces, Bangladesh's Prime Minister Sheikh Hasina and Foreign Minister A.K. Abdul Momen confirmed that the country stood behind the Palestinians' legitimate struggle and condemned the Israeli attacks on civilians.

Recent tensions that started in East Jerusalem during the Muslim holy month of Ramadan spread to Gaza as a result of Israeli assaults on worshippers at the flashpoint Al-Aqsa Mosque complex and Sheikh Jarrah neighborhood.

The tension spread to the Gaza Strip, with Israel launching airstrikes that killed at least 248 Palestinians, including 66 children and 39 women, and injured more than 1,900 others. Health authorities in the West Bank also confirmed that 31 people were killed in the occupied region, totaling 279 across all Palestinian territories.

Speaking to Anadolu Agency (AA), Imtiaz Ahmed, a professor of International Relations at Dhaka University, said that the timing of the announcement of the change to Bangladeshi passports confused citizens.

"Recently, when some Muslim countries forged relations with Israel, Bangladesh expressed its support to the Palestinian cause. So I don't think that withdrawing two words from the passports will shake Bangladesh's long-standing moral position on the Israel-Palestine conflict," Ahmed said.

He noted that Israel does not have an embassy in Bangladesh and that there is no bilateral trade between the countries while pointing out that, "On the other hand, Bangladeshi authorities have been allowing the Palestinian Embassy in Dhaka for years."

Bangladesh has supported a two-state solution to the Israel-Palestine conflict and strongly opposed the illegal Israeli settlements on Palestinian territories, said Ahmed, adding, "I hope that Bangladesh will never change this position."

"But such a sudden decision that came at a time when Bangladesh is marking its golden anniversary of independence and the 100th anniversary of the birth of Rahman is unacceptable," Tuhin said.

Tuhin did however applaud the Bangladeshi government for condemning the recent Israeli attacks on Palestinians and expressed his hope that the country would continue to oppose the Israeli aggression in the greater interest of humanity and justice.

Speaking to AA, Bangladesh Foreign Minister A.K. Abdul Momen said that the words "except Israel" have been removed from the passports for "administrative convenience."

"This has nothing to do with the foreign policy of Bangladesh," Momen said, adding that the decision was made six months ago.

"This move will not affect our position ... We are strong supporters of Palestine," he added.

Gilad Cohen, the Israeli Foreign Ministry's deputy director-general for Asia and the Pacific, said on Twitter: "Great news! #Bangladesh has removed travel ban to Israel. This is a welcome step & I call on the Bangladeshi government to move forward and establish diplomatic ties with #Israel so both our peoples could benefit & prosper."

A Bangladeshi Foreign Ministry statement, however, clarified: "The removal of the observation has been done to maintain international standard of Bangladeshi e-passports and does not imply any change of Bangladesh's foreign policy towards the Middle East."

"The ban on travel of Bangladeshi passport holders to Israel remains unchanged. The Government of Bangladesh has not deviated from its position on Israel and Bangladesh remains firm on its longstanding position in this regard," it added.

Reiterating its condemnation of the recent Israeli attacks on Palestinians at Al-Aqsa Mosque and in the Gaza Strip, the statement added: "Bangladesh reiterates its principled position concerning the Two-State Solution of the Palestine-Israel conflict in light of the UN resolutions recognizing pre-1967 borders and East Jerusalem as the capital of the State of Palestine."

Meanwhile, Palestinian Ambassador in Dhaka Yousef S.Y. Ramadan told local media on Sunday that the omission of the words – except Israel – from Bangladeshi passports is "unacceptable."

"I'm aware of the development. Every country has the sovereign right to take decision on passport or any other issues. Having admitted that, I would say this decision is unacceptable to us," Ramadan added.