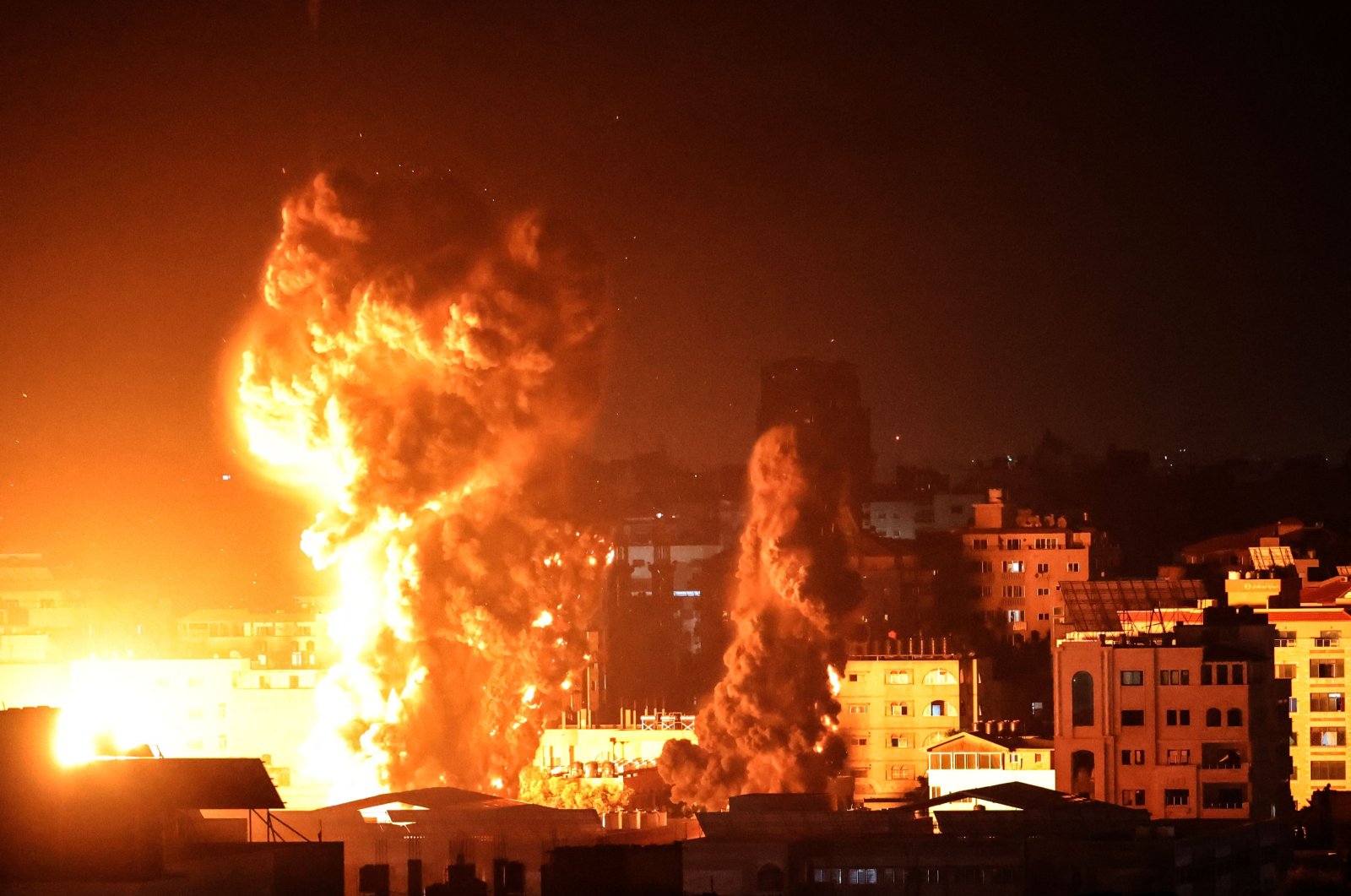 Fire and smoke rise above buildings in Gaza City as Israeli warplanes target the Palestinian enclave, Gaza City, Palestine, early on May 17, 2021. (AFP Photo)
by DAILY SABAH WITH AGENCIES May 17, 2021 10:14 am

Another series of Israeli airstrikes hit the Gaza Strip early on Monday as Tel Aviv continues its aggression against Palestinians, killing, beating and arresting them, while Israel’s caretaker Prime Minister Benjamin Netanyahu says the attacks on the Palestinian enclave will rage on, ignoring mounting calls for a cease-fire

The Israeli military has launched dozens of airstrikes on the Gaza Strip, killing at least eight and injuring over 40, as the offensive against Palestinians spilled into a second week on Monday amid mounting international calls for a cease-fire and widespread anti-Tel Aviv protests.

Israeli airstrikes hammered the Gaza Strip Monday, after a week of brutal attacks against Palestinians that left about 200 of them dead. Overnight on Sunday to Monday, Israel launched dozens of strikes in the space of a few minutes across the crowded coastal Palestinian enclave controlled by resistance group Hamas, according to Agence France-Presse (AFP) journalists.

Flames lit up the sky as explosions shook Gaza City. According to Ahmed Eldin, a Kuwaiti-American of Palestinian descent, Israel targeted an area that is very close to Al-Shifaa hospital and bombed all the roads close to it. The Emmy-nominated journalist said in an Instagram post that this area is the main electricity supplier in Gaza. The strikes caused widespread power cuts and damaged hundreds of buildings, local authorities said. Residents of Gaza awakened by the overnight barrage described it as the heaviest since the war began a week ago, and even more powerful than the wave of airstrikes in Gaza City the day before that left 42 dead, including at least eight children and two doctors, and flattened three buildings.

Gaza's Mayor Yahya Sarraj told Qatar-based Al-Jazeera TV that the airstrikes had caused extensive damage to roads and other infrastructure.

"If the aggression continues we expect conditions to become worse,” he said, according to The Associated Press (AP). West Gaza resident Mad Abed Rabbo, 39, expressed "horror and fear" at the intensity of the onslaught.

"There have never been strikes of this magnitude," he said.

Israel's army said in a statement that it hit the homes of nine "high-ranking" Hamas commanders, without providing details on casualties. Gazan Mani Qazaat said Israeli Prime Minister Benjamin Netanyahu "should realize we're civilians, not fighters," adding "I felt like I was dying."

In total, 198 Palestinians have been killed in Gaza, including at least 58 children, and more than 1,200 wounded since Israel launched its air campaign against Hamas on May 10, according to the Gaza Health Ministry. Air raids on Gaza were preceded by days of tensions and Israeli aggression in occupied East Jerusalem, where hundreds of Palestinians were assaulted by Israeli forces and settlers at the Al-Aqsa Mosque and in the Sheikh Jarrah neighborhood.

A brief look at casualty numbers on both sides shows just how asymmetric and disproportionate Israel’s violence against Palestine ishttps://t.co/tTGlmQdoHI pic.twitter.com/DTKeW1iJpa

As Israel continued its crackdown on Palestinians, thousands of demonstrators in U.S. cities, namely Washington, D.C. and New York City rallied Saturday in solidarity with Palestine and to protest against Israel for its attacks on Gaza. In the U.S. capital, demonstrators gathered at the Washington Monument, carrying Palestinian flags and signs in support of Palestine, chanting "Free, Free Palestine," according to Anadolu Agency (AA).

The crowd also protested against the U.S. administration remaining silent on the Israeli attacks in Palestine. Later they marched to the U.S. Congress building that houses the House of Representatives and Senate offices. Demonstrators called on the Biden administration to halt military support for Israel. The three-hour protest remained peaceful and coincided with the 73rd anniversary of nakba, or the catastrophe, when hundreds of thousands of Palestinians were forced to flee during the 1948 war over Israel's establishment.

Nakba, the symbol of forced migration and massacres for millions of Palestinians who have lived in exile for decades, expresses an unrelenting pain of more than seven decades after they were forcibly evicted from their lands.

Brooklyn, New York, was the focal point of pro-Palestine protests that were attended by thousands, with Muslim and human rights groups joining hands. Protesters marched in the Bay Ridge area, carrying banners that read: "End the occupation," "End Israeli apartheid" and "Stop the killing." Orthodox Jews were also present at the rally.

U.S. President Joe Biden gave no signs of stepping up public pressure on Israel to agree to an immediate cease-fire despite calls from some Democrats for the Biden administration to get more involved. His ambassador to the U.N., Linda Thomas-Greenfield, told an emergency high-level meeting of the Security Council that the United States was "working tirelessly through diplomatic channels" to stop the fighting. But as battles between Israel and Hamas rulers surged to their worst levels since 2014 and the international outcry grew, the Biden administration – determined to wrench U.S. foreign policy focus away from the Middle East and Afghanistan – has declined so far to criticize Israel's part in the fighting or send a top-level envoy to the region. Appeals by other countries showed no sign of progress.

Thomas-Greenfield warned that the return to armed conflict would only put a negotiated two-state solution to the decades-old Israeli-Palestinian conflict even further out of reach. However, the U.S., Israel's closest ally, has so far blocked days of efforts by China, Norway and Tunisia to get the Security Council to issue a statement, including a call for the cessation of hostilities.

In Israel, Hady Amr, a deputy assistant dispatched by U.S. Secretary of State Antony Blinken to try to de-escalate the crisis, met with Israeli Defense Minister Benny Gantz, who thanked the U.S. for its support. Blinken himself headed out on an unrelated tour of Nordic countries, with no announced plans to stop in the Middle East in response to the crisis. He made calls from the plane to Egypt and other nations working to broker a cease-fire, telling Egypt that all parties "should de-escalate tensions and bring a halt to the violence.”

A longtime friend of Netanyahu, Biden focused on civilian deaths from Hamas rockets in a call with Netanyahu on Saturday, and a White House readout of the call made no mention of the U.S. urging Israel to join in a cease-fire that regional countries were pushing.

Hours before Monday's airstrikes Netanyahu told Israelis in a televised address that Israel "wants to levy a heavy price” on Hamas. That will "take time,” Netanyahu said, signaling the war would rage on for now. Representatives of Muslim nations met Sunday to demand Israel halt the attacks that are killing Palestinian civilians in the crowded Gaza Strip.

The meeting of the 57-nation Organisation of Islamic Cooperation (OIC) also saw Turkey and some others criticize a U.S.-backed push under which the United Arab Emirates (UAE), Bahrain and other Islamic nations signed bilateral deals with Israel to normalize their relations, stepping over the wreckage of collapsed international efforts to broker peace between Israel and the Palestinians in the long-term.

Eight foreign ministers spoke at the Security Council session, reflecting the seriousness of the conflict, with almost all urging an end to the fighting. Biden's predecessor, Donald Trump, had thrown U.S. support solidly behind Israel, embracing Netanyahu as an ally in Trump's focus on confronting Iran. Trump gave little time to efforts by past U.S. administrations to push peace accords between Israel and the Palestinians, instead encouraging and rewarding Arab nations that signed two-country normalization deals with Israel.

Biden, for his part, calls the Middle East and Central Asia conflicts a distraction from U.S. foreign policy priorities, including competition with China. He's sought to calm some conflicts and extricate the U.S. from others, including ending U.S. military support for a Saudi-led war in Yemen, planning to pull U.S. troops from Afghanistan and trying to return to a nuclear deal with Iran that Israel opposes.

Palestinian Prime Minister Mohamed Shtayyeh said on Monday that the Palestinian Authority (PA) will go to the United Nations General Assembly (UNGA) for issuing a resolution to halt the Israeli aggression.

"Unfortunately, the UN Security Council has failed to reach a resolution to condemn and halt the Israeli assaults,” Shtayyeh said during a Cabinet meeting in the West Bank city of Ramallah. "This means that we will go the UN General Assembly to adopt a resolution where no country has a veto power,” he said.