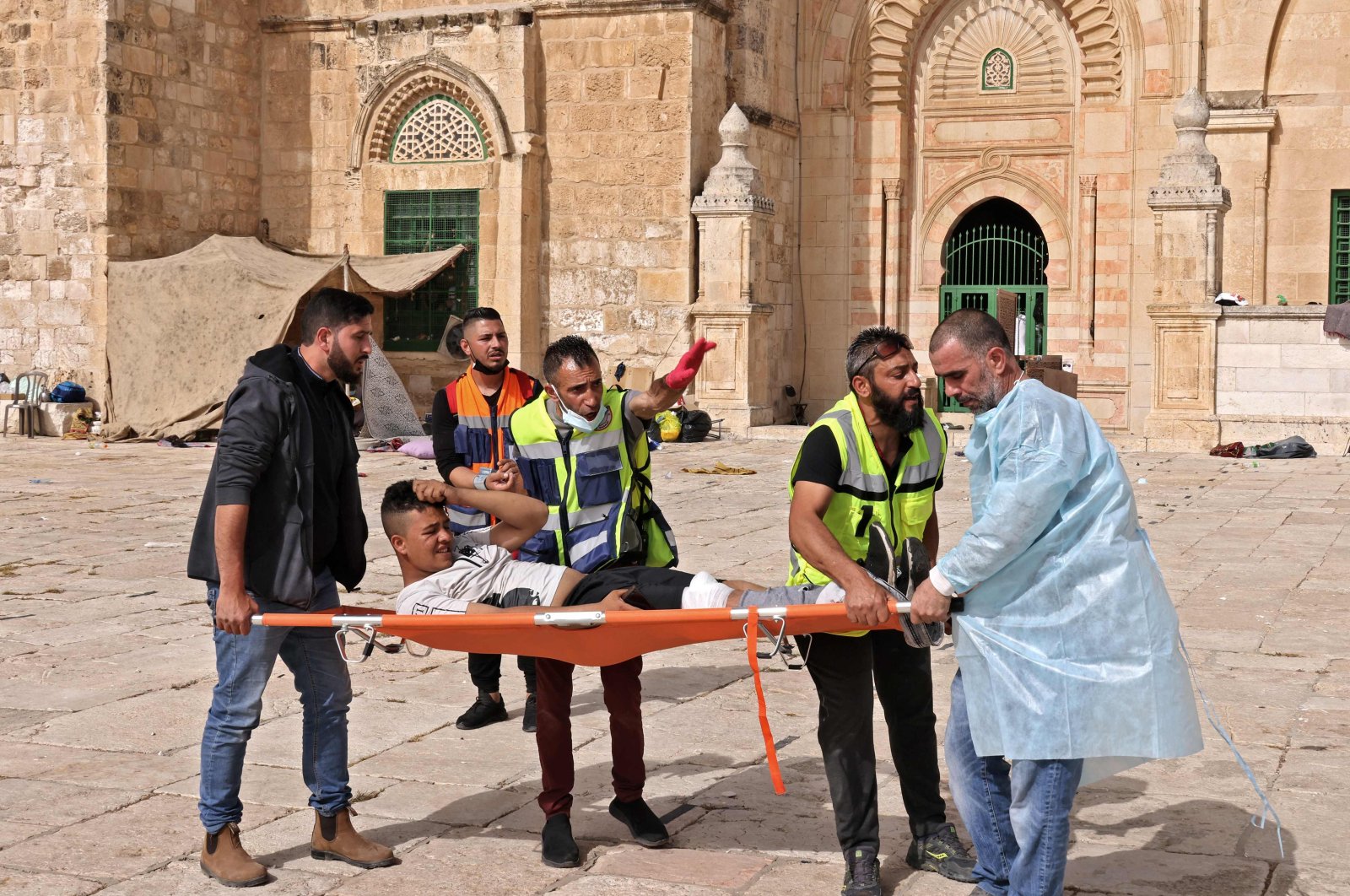 Palestinian medics evacuate a protester injured by Israeli attacks from the Al-Aqsa Mosque compound in the Old City, East Jerusalem, occupied Palestine, May 10, 2021. (AFP Photo)
by DAILY SABAH May 11, 2021 11:18 am
RECOMMENDED

Germany, France, Hungary, Czech Republic and Austria came under fire for issuing statements that completely disregarded days of Israeli violence and aggression against Palestinian civilians in Jerusalem and Gaza, which left at least 24 dead and over 300 others injured.

The foreign ministries of the aforementioned countries released statements that resembled the one written by Israel.

“Rocket fire on Israeli civilians is not justifiable under any circumstances – and certainly no contribution to resolving the conflict, but a senseless new escalation of violence. All sides have a duty to prevent further civilian casualties,” the German Foreign Ministry said on Twitter.

Czech Foreign Minister Jakob Kulhanek also urged an “immediate halt” to the firing of rockets from Gaza into Israel.

“We strongly condemn any incitement to violence and hope that further escalation of unrest in #Jerusalem will be averted,” the statement read, completely disregarding the fact that Israeli attacks have killed 24 people, including nine children.

The Austrian foreign office also issued a tweet calling for an “immediate halt to the firing of rockets from Gaza into Israel. Users quickly criticized the statement for failing to condemn Israeli violence and occupation.

“How about condemning illegal occupation inside a foreign country??” one user said, while another slammed the statement for failing to condemn Israel’s killing of Palestinian children.

Meanwhile, the French Ministry for Europe and Foreign Affairs released a statement, expressing concern over clashes and violence, without mentioning that both were perpetrated by Israeli forces.

“Once again France expresses its serious concern over the clashes and violence witnessed over the past several days in Jerusalem, which has left several hundred injured and could lead to a large-scale escalation. France strongly condemns last night’s rocket fire from the Gaza Strip targeting Israeli territory, in violation of international law,” the statement read.

Contrary to the other statements, the French statement drew attention to Israel’s forced evictions of Palestinians:

“In this regard, France is deeply concerned by the threat of forced evictions against residents of the Sheikh Jarrah neighborhood in East Jerusalem, which are linked to the settlement policy – which is illegal under international law – and exacerbate tensions. France also reaffirms its commitment to preserving the historic status quo on the Temple Mount.”

Unlike others, the leader of Scotland openly criticized Israel for attacking a place of worship.

Attacking a place of worship at any time is reprehensible, but attacking a mosque during Ramadan is utterly indefensible. It is also a violation of international law. Israel should heed calls to halt the violence immediately. #SheikhJarrah https://t.co/4H4Bu8MCwh

Turkish officials have urged all world countries to take action against Israel’s indiscriminate and lawless attacks against Palestinians and highlighted that issuing weak statements will not do anything to solve the decadeslong problem.

Tensions in Jerusalem have soared in recent weeks as Palestinians have protested against Israel's restrictions on access to parts of the Old City during the Muslim holy month of Ramadan and after authorities ordered several Palestinian families to leave their homes to make way for Israeli settlers.