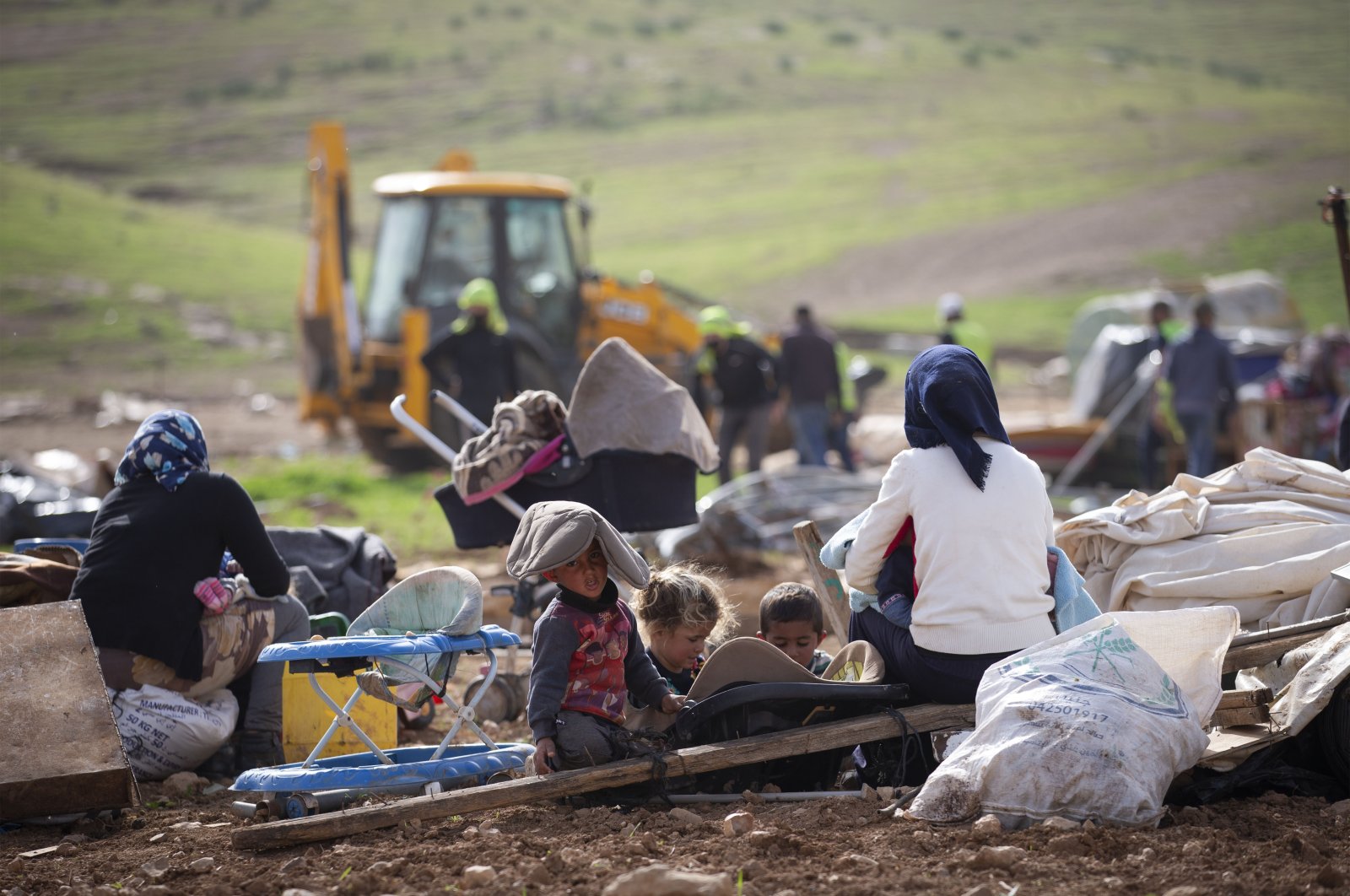 Palestinians watch Israeli troops demolish tents and other structures at the Khirbet Humsu hamlet in the Jordan Valley in the occupied West Bank, Palestine, Feb. 3, 2020. (AP Photo)
by DAILY SABAH WITH AGENCIES Feb 05, 2021 11:58 am
RECOMMENDED

Israel was criticized Thursday by the European Union over its demolition activities in the occupied West Bank after Israeli forces destroyed a Bedouin village for the second time in three months, leaving several families homeless.

"This large-scale demolition is another example of the deplorable trend of confiscation and destruction," said Sven Kuehn von Burgsdorff, the EU's envoy representing the Palestinian territories during a visit to Humsa Al Bqai'a which was also attended by Palestinian Prime Minister Mohammad Shtayyeh.

Seven tents sheltering 66 people were destroyed Wednesday, according to Israeli nongovernmental organization (NGO) B'Tselem, and homes were confiscated Monday in the nearby village of Khirbet Humsa in the northern West Bank's Jordan Valley. Israeli troops accompanied by bulldozers also knocked down several steel and wooden structures in the village, Reuters TV footage showed.

Despite the coronavirus outbreak, Israeli forces have continued their violent actions against the Arab population, razing Palestinian homes and ignoring allegations of war crimes in the occupied territories.

Khirbet Humsah's 130 inhabitants have vowed to stay, with some sleeping on mattresses and plastic tarps strewn on the rocky soil. Tented homes and animal shelters in the village were last razed in November, though residents returned soon after.

"We will not move from here, we will stay here. If they demolish, we will rebuild," said one of the residents, Ibrahim Abu Awad, according to remarks carried by Reuters. He and other Bedouin in the village said they feared Israeli settlers would seize the vacated land.

Several rights groups called it an attempt to displace the entire Palestinian community from the area, with B'Tselem saying that the Israeli army wanted to take away the residents' land.

COGAT, Israel's chief liaison office with the Palestinians, said the homes had been built illegally and that they were located in a military area where firing exercises were carried out, endangering the residents, who had been offered alternative places to live.

Palestinians and rights groups say such permits are nearly impossible to obtain from Israel. A rights group had reported last month that Israeli authorities demolished 729 Palestinian buildings in 2020 on the pretext of lacking construction permits.

The EU envoy said that the demolition activities had left several families homeless during the winter months and amid the pandemic.

"We expect the Israeli authorities to refrain from any further demolition of Palestinian property," he said.

Some 440,000 Israeli settlers live among more than 3 million Palestinians in the West Bank, territory captured by Israel in a 1967 war and which Palestinians want as part of a future state.

Apart from demolition activities in the occupied Palestinian territories, Israel is accused of illegally detaining Palestinians. In a press release last week, the Palestinian Prisoners Society said that Israeli forces recently arrested 25 Palestinians, including minors. It noted that the detainees are from different provinces of the West Bank.

The Israeli army frequently carries out large-scale arrest campaigns in the occupied West Bank and East Jerusalem under the pretext of searching for "wanted" Palestinians. It uses a so-called "administrative detention policy" which allows prisoners to be detained without charge for renewable periods of up to six months each time. While Israel argues that the procedure allows authorities to apprehend suspects and prevent attacks while continuing to gather evidence, critics and rights groups say the system is being abused.

According to Anadolu Agency (AA), the data conducted by Palestinians shows that Israel is holding about 4,400 Palestinian prisoners, including 40 women, in its prisons, while the number of child detainees is about 170 and administrative detainees (held without charge) are about 380.