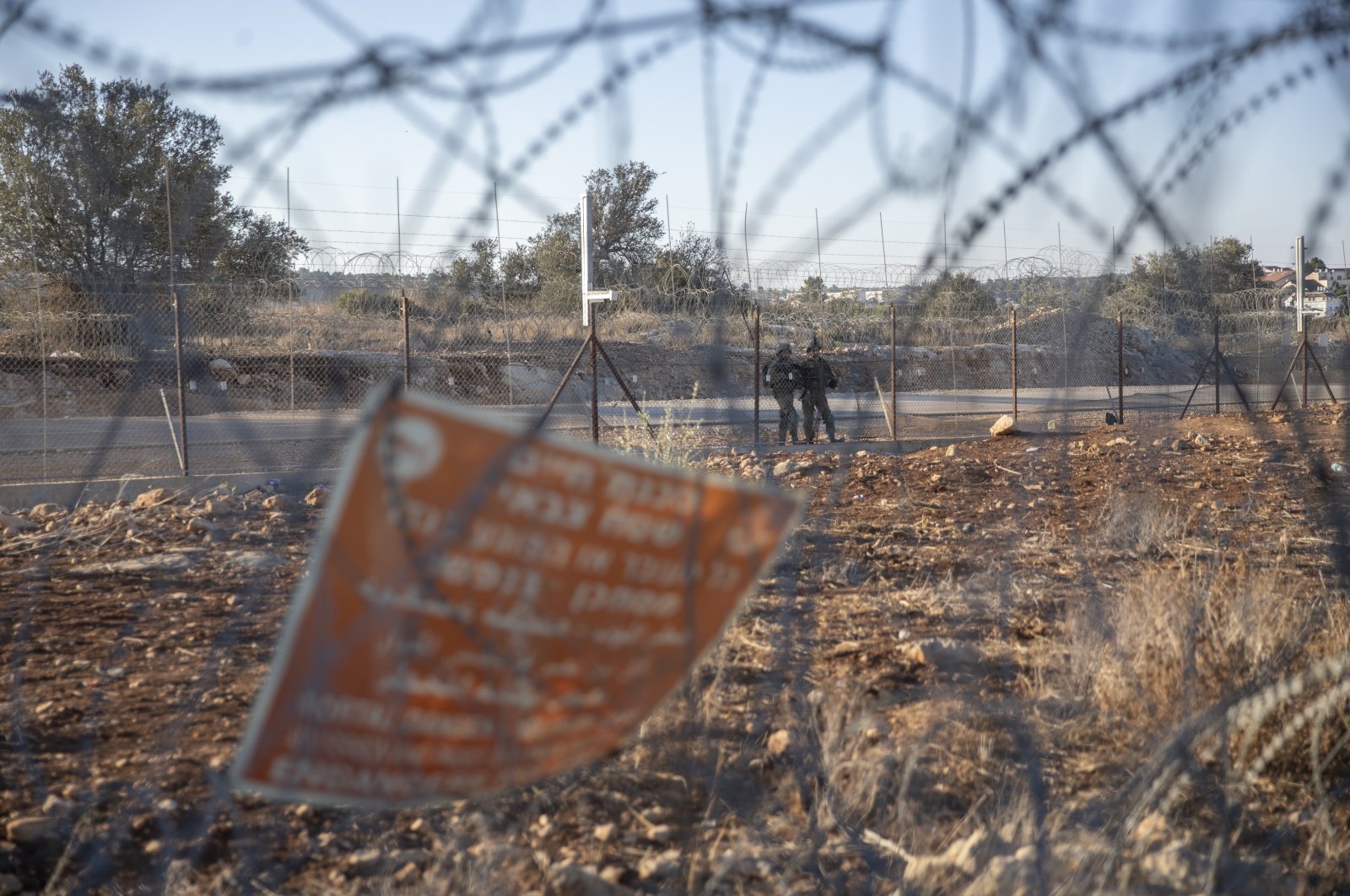 For nearly two decades, Palestinians have been suffering under Israel's illegal occupation of the West Bank, with a separation barrier shaping every aspect of their lives

Three days a week, Palestinian farmers in the occupied West Bank village of Qaffin line up at a yellow gate and show military permits to soldiers in order to tend to their crops on the other side of Israel's separation barrier.

The farmers say that they can no longer live off their land, which is suffering without proper cultivation, because of increasingly onerous Israeli restrictions. The olive groves just beyond the gate are scorched from a recent blaze – firefighters also need permission to enter.

Nearly two decades after Israel sparked controversy worldwide by building the barrier during a Palestinian uprising, it has become a seemingly permanent feature of the landscape – even as Israel encourages its citizens to settle on both sides.

Tens of thousands of Palestinians navigate its checkpoints every morning as they line up in cramped terminals to enter Israel for jobs in construction and agriculture. Farmers in Qaffin and dozens of other villages need permits to access their own private property.

Israel says the barrier helped stop a wave of attacks during the 2000-2005 uprising and is still needed to prevent deadly violence. Eighty-five percent of the still-unfinished barrier is inside the occupied West Bank, carving off nearly 10% of its territory.

The Palestinians view it as an illegal land grab, and the International Court of Justice (ICJ) in 2004 said the barrier was "contrary to international law." In Jerusalem and the West Bank city of Bethlehem, the barrier is a towering concrete wall several meters (yards) high crowned with barbed wire and cameras.

In rural areas, it largely consists of barbed wire fencing and closed military roads. Along Israel’s main north-south highway, it's concealed by earthworks and landscaping so that motorists get no more than a passing glance at the reality of military rule.

Palestinians in Qaffin say the wall has lopped off some 4,500 dunams (1,100 acres) of their farmland, all of it inside the West Bank.

Ibrahim Ammar says he grew an array of crops including watermelon and corn, but is now limited to olives and almonds because they require less attention. Even during the annual olive harvest, which began last month, he can only enter his land three days a week and must apply for permits to bring family members along to help.

"My father, my grandfather, they were totally dependent on the land," he said. "Now I can’t provide for myself and my children.” He drives a taxi to supplement his income.

Other villagers work menial jobs inside Israel and its West Bank settlements. At least one resident, frustrated by the restrictions, grows vegetables on the roof of his home.

"Three days is not enough to serve the land," said Taysir Harashe, who was mayor of the village when the barrier was built. "The land is getting worse and worse.”

The U.N. estimates some 150 Palestinian communities are in a similar predicament, and that 11,000 Palestinians live in the so-called Seam Zone inside the West Bank but west of the barrier, requiring Israeli permits just to stay in their homes.

HaMoked, an Israeli rights group that helps Palestinians secure permits, says the farmers' situation is worsening. It says data obtained from the military through a freedom of information request shows that 73% of applications for permits were denied last year, compared to 29% in 2014. Less than 3% are denied on security grounds, it said.

In 2014, Israel stopped granting permits to relatives unless they are listed as agricultural workers on larger plots. In 2017, the military began dividing larger holdings among the members of extended families and ruled that anything smaller than 330 square meters (3,500 square feet) was agriculturally unsustainable. Owners of so-called "tiny plots" are denied permits.

"There’s no security justification," said Jessica Montell, the director of HaMoked, which is challenging the regulation before Israel's Supreme Court. "They’ve decided you own a plot of land that they think is too small to warrant cultivation.”

She said other regulations are based on "elaborate calculations” about how many hands are needed to tend to various crops.

"It’s a crazy table. They say if you are growing cucumbers you can get X number of helpers per dunam.” Asked about the restrictions, the military said its forces aim to "ensure a smooth fabric of life for all sides."

The military "sees great importance in the coordination of the olive harvest, and operates in accordance with guidelines and the situational assessment," it said in a statement.

Israel has always said the barrier was not intended to delineate a permanent border, and some supporters said at the time that by reducing violence it would aid the peace process.

"The fence was built according to the needs of security only," said Netzah Mashiah, a retired Israeli colonel who oversaw construction of the barrier until 2008. "We understood while building it that it might be a border in the far future... but this was not the goal of this fence."

Indeed, the barrier only looks like a heavily guarded border. Israelis and Palestinians live on both sides, and Israel is actively building settlements and settlement infrastructure east of the barrier. There have been no substantive peace talks in more than a decade, and Prime Minister Naftali Bennett is opposed to the creation of a Palestinian state in the West Bank and other territories Israel seized in the 1967 war.

In Bethlehem, the towering concrete wall is covered with political graffiti and often satirical artwork. One refers to an episode of Larry David's HBO comedy "Curb Your Enthusiasm" in which Jewish men avail themselves of a Palestinian restaurant to conceal their affairs from their wives.

Another pays tribute to George Floyd, who died under the knee of a Minneapolis police officer last year. It became an eclectic tourist attraction after the world-famous graffiti artist Banksy secretly painted the wall in the 2000s. In 2017, he opened the "Walled-Off Hotel," a monument of bleak resistance-themed art.

Abu Yamil, the owner of a nearby souvenir shop who declined to give his full name, sells Banksy prints and postcards among other trinkets.

The 70-year-old waxes nostalgic about the situation decades ago, when Palestinians could travel freely.

"It was occupation, but we lived together,” he said. "I drove my car to Tel Aviv.”

Like many Palestinians, he doubts the unfinished barrier serves much of a security purpose – workers without permits have always managed to sneak in.

"This wall will be here forever, because they don't want peace,” he said. "Israel wants all the land.”

While Israel eyes all the land, the Jewish settlers continue their attack on Palestinians. A group of Jewish settlers attacked Palestinian farmers harvesting their olive crops in the town of Surif, near the occupied West Bank city of Hebron on Friday.

According to Palestinian news agency WAFA, at least one injury was recorded during the attack. The media coverage of the attack showed numerous pictures of a man and women showing their wounds. Another separate attack took place in the town of Kafr Qaddum, in the northern West Bank.

Over the past few weeks, the West Bank has witnessed a spate of attacks by Jewish settlers as Palestinian farmers began harvesting olives this year. During these attacks, olive trees have been felled and set on fire in various parts of the occupied West Bank.