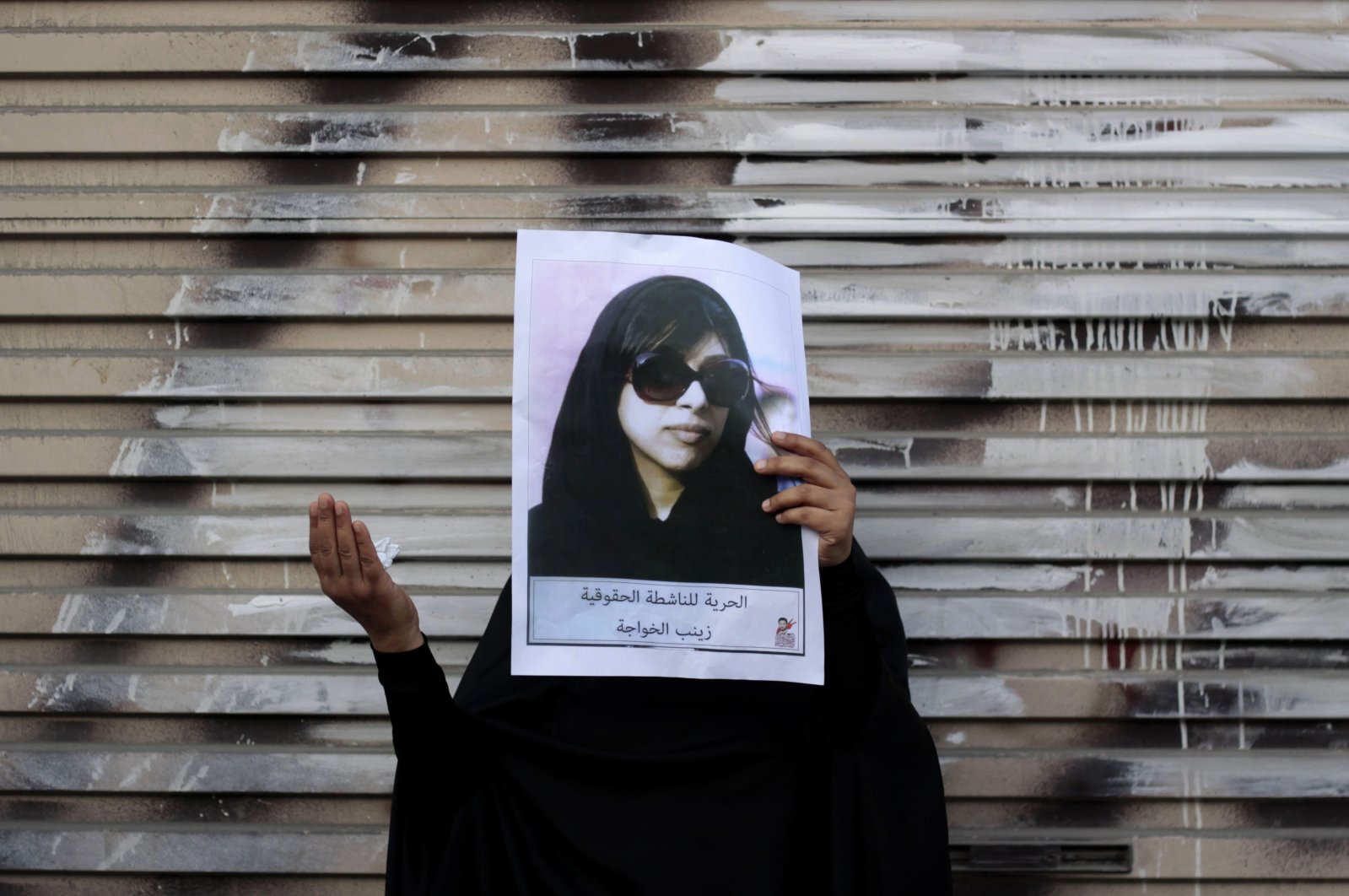 In this March 28, 2013 file photo, a Bahraini anti-government protester holds up a picture of jailed opposition human rights activist Zainab al-Khawaja as she participates in a prayer for al-Khawaja's freedom after a march in Malkiya, Bahrain. April 16, 2015. (AP Photo)
by French Press Agency - AFP Apr 07, 2020 11:36 am
RECOMMENDED

Human rights groups have called on the energy-rich Gulf states to release peaceful political activists from jail and scale back detention of migrant workers, to limit the spread of the coronavirus.

Hundreds of human rights defenders, peaceful activists and opposition members have been in jail for years in the six Gulf Cooperation Council (GCC) states.

"As the coronavirus pandemic rages on, Gulf states should take prompt measures to protect the health and rights of detainees and staff in immigration detention centres, including by releasing people and finding alternatives to detention," Human Rights Watch said Tuesday.

"Many migrant workers in the Gulf, especially those who are undocumented through no fault of their own or have fled unscrupulous employers, are in prolonged pre-deportation detention in overcrowded, unhygienic conditions," said the human rights organization's deputy Middle East director, Michael Page.

Almost half of the GCC population of 52 million are expatriates, hailing mostly from South Asia, the Philippines or within the Arab world.

Saudi Arabia has imposed a 24-hour curfew on most of the country. Dubai too has rolled out a round-the-clock curfew while Kuwait has announced a lockdown on two areas densely populated with expats.

Some 8,400 coronavirus infections and 60 deaths have been reported in the GCC states. A majority of the cases in Kuwait, Qatar, Saudi Arabia and the UAE are among foreigners.

On April 1, Kuwait offered expat workers living illegally in the country a one-month amnesty to leave with a free air ticket and without paying delay fines. Some 150,000 people are expected to benefit from the offer.

HRW said people in immigration detention in Gulf states pending deportation should be given noncustodial alternatives due to the health risks and global travel restrictions.

The New York-based watchdog also urged Gulf governments to consider extending visas to ensure that expats retain their legal residency at a time when they cannot travel home freely.

Overcrowding is a serious and recurring problem in many of the Gulf states' prisons and detention centers, it said.

A group of 20 human rights organizations, including Amnesty International and HRW, have urged Bahrain to immediately release peaceful activists still behind bars.

Last month, Bahrain freed 901 prisoners on "humanitarian grounds" and 585 others were given noncustodial sentences.

The groups called for the release of opposition leaders, activists and journalists who remain behind bars.

HRW has also called on UAE authorities to "unconditionally release people detained unlawfully, including those detained for peaceful dissent."

Amnesty International and the Gulf Centre for Human Rights highlighted the plight of Ahmed Mansoor, a prominent human rights activist who has been held in solitary confinement for three years.