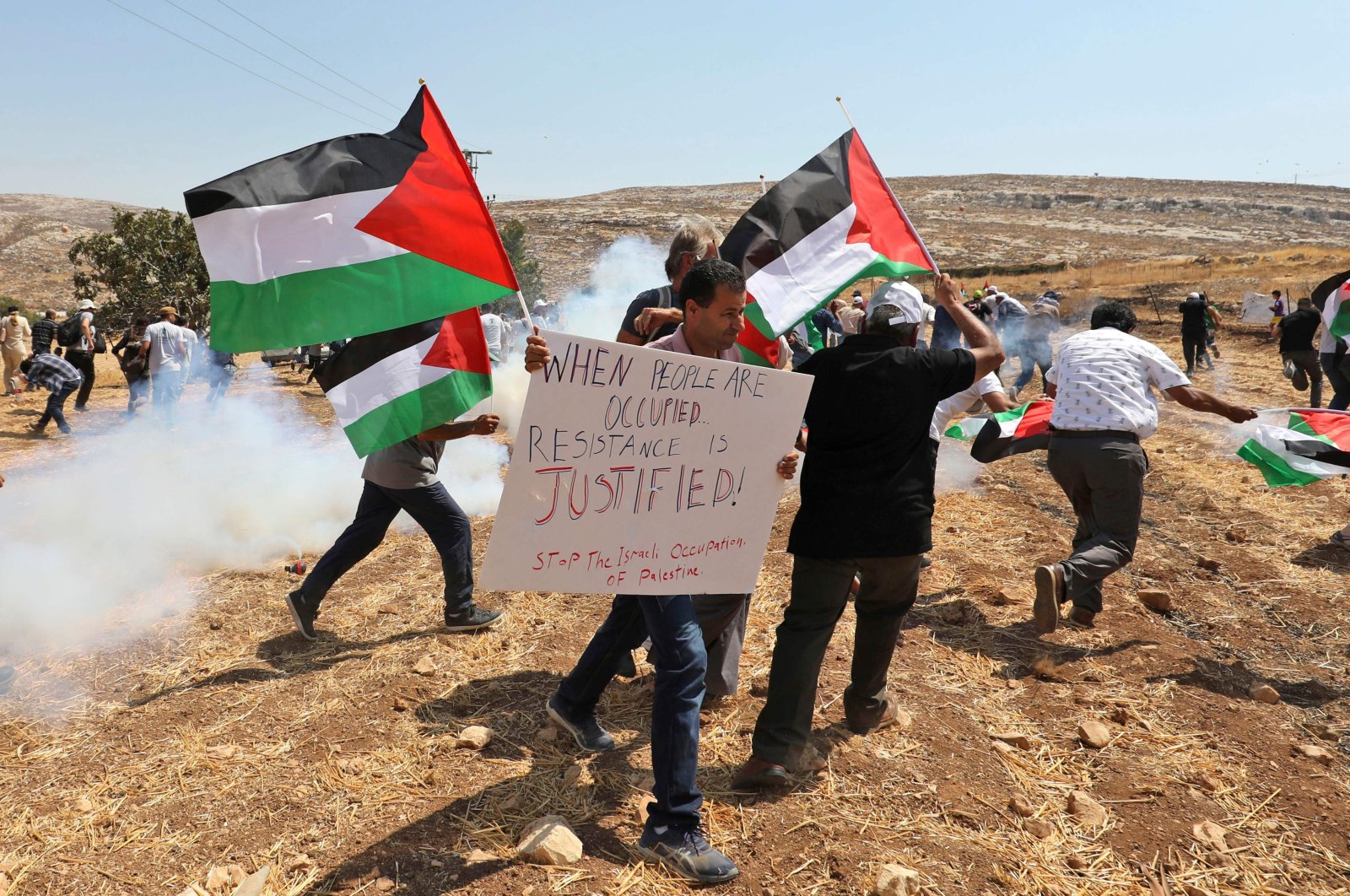 Palestinian protesters run from tear gas canisters fired by Israeli troops during clashes following a demonstration against the expropriation of Palestinian land by Israel, in the village of Kafr Malik northeast of Ramallah in the Israeli-occupied West Bank on Sept. 13, 2019. (AFP Photo)
by Daily Sabah with AA Feb 26, 2021 12:44 pm
RECOMMENDED

As Palestine approaches its first parliamentary and presidential elections in 15 years, Israel has begun arresting Hamas members in the West Bank in an effort to forestall a democratic process that could set off a new chapter in Israeli-occupied territories.

The Gaza-based Hamas has warned Israel against meddling in Palestinian national elections, saying it may lead to their postponement amid a large detention campaign against members of the movement that prepares to join long-awaited legislative and presidential elections.

In a statement following a meeting chaired by its leader, Ismail Haniyeh said that the resistance movement condemned the occupation's "blatant interference" in the electoral process through arrest campaigns against Hamas candidates and threatening them not to run in the elections.

Israeli forces have detained a number of senior Hamas leaders in overnight raids in the occupied West Bank over the past few weeks in a bid to prevent them from running in the elections while others have been threatened by Israeli intelligence officers with imprisonment if they contest the polls.

Hamas leader Nayef al-Rajoub said Tuesday he was warned by Israeli intelligence agents against running in the Palestinian elections later this year. Speaking to Anadolu Agency (AA), al-Rajoub, 63, said he was searched during an Israeli raid on his home in the town of Dura, west of Hebron.

"An intelligence officer then threatened me not to run in the upcoming polls," al-Rajoub said, adding that he was only allowed to cast a ballot in the elections.

Al-Rujoub, a brother of prominent Fatah leader Jibril al-Rujoub, received the most votes during the 2006 parliamentary elections won by Hamas.

In the Hamas-led government that emerged from those elections, al-Rujoub served as minister of religious endowments. He had previously been detained by Israeli forces and served more than eight years in prison.

In a statement, the Palestinian Prisoner Society said the arrests took place in the cities of Tubas, Jenin, East Jerusalem, Bethlehem and Hebron. Sawafteh, 47, was previously detained by the Israeli army and served more than 12 years in Israeli prisons.

Muntasir Al-Shunnar, the son of another detainees Mustafa Al-Shunnar told The New Arab’s Arabic language site that Israeli forces "raided his home, destroyed some belongings and questioned my father before arresting him."

Al-Shunnar, who is also a professor at the An-Najah National University in Nablus added that his father suffers from a number of health issues that require medical attention.

The movement called on the Palestinian Authority (PA), the national forces and Jerusalemites to "take action at the local, regional and international levels to stop this interference and to participate in the elections as candidates and voters." Hamas stressed its adherence to the elections schedule, warning against "any retreat in commitment to holding the elections," adding that such a move poses "grave risks and repercussions."

It also affirmed its adherence to national unity and ending division among Palestinians.

Palestinian President Mahmoud Abbas announced parliamentary and presidential elections in January, in a move that is widely seen as a response to criticism of the democratic legitimacy of Palestinian political institutions, including Abbas's presidency. No Palestinian elections have been conducted in the Israeli-occupied West Bank, Gaza and East Jerusalem for 15 years amid a deep rift between Abbas' Fatah group and the Hamas movement.

Palestinians are scheduled to vote in legislative elections on May 22, presidential polls on July 31 and National Council polls on Aug. 31. There are 2.8 million eligible voters in Gaza and the West Bank.

The last ballot, in 2006, ended in a surprise win by Hamas in its first parliamentary elections. That set up a power struggle between Hamas in Gaza and Fatah in the West Bank.