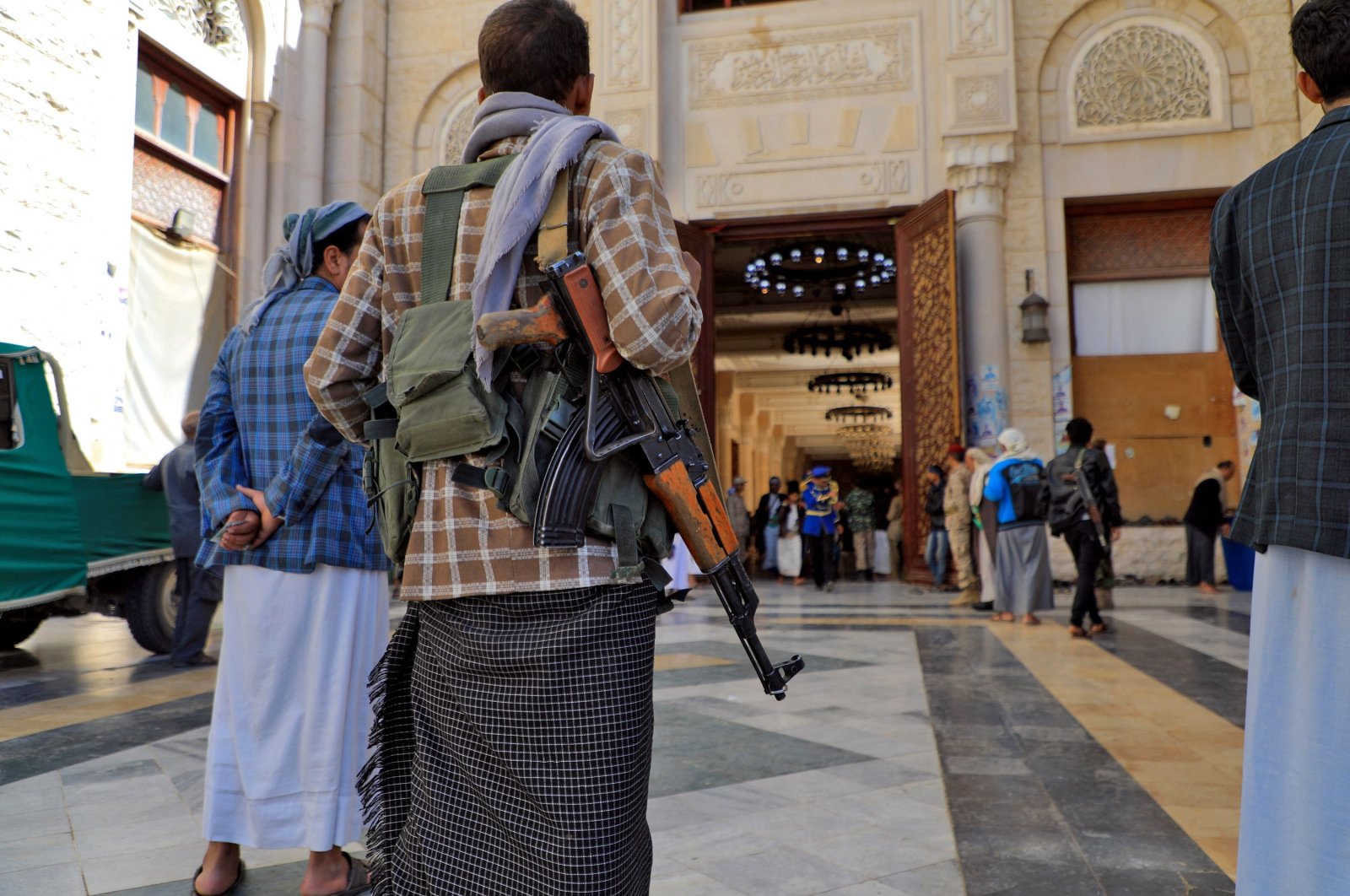 Yemenis attend the mass funeral of Houthi rebel fighters killed in battles with Saudi-backed government troops in the Marib region, at the al-Saleh Mosque in Sanaa, Yemen, Oct. 28, 2021. (AFP Photo)
by Agencies Nov 01, 2021 9:44 am
RECOMMENDED

A Houthi ballistic missile attack on a mosque and a religious school killed at least 22 civilians and injured 25 civilians, including women and children, in the Yemeni province of Marib, the country's information minister said in a statement on Twitter on Monday.

The missiles hit Dar al-Hadith - a religious school and a mosque - in the residential neighborhood of al-Aumd late Sunday and the casualties included women and children, they said. The attack also damaged nearby houses, said the officials who spoke on condition of anonymity because they were not authorized to brief media

Two ballistic missiles were used in the attack late on Sunday, Marib governor's office said in a statement. There was no immediate claim of responsibility by the Iranian-backed Houthis.

Fighting between government forces and Houthis has escalated in recent months. The United Nations says some 10,000 people were displaced in September by fighting in Marib, the internationally recognized government's last northern stronghold. It is calling for a humanitarian corridor for aid.

The war in Yemen and ensuring economic collapse as well as restrictions on imports to Houthi-held areas have caused what the U.N. says is the world's biggest humanitarian crisis, with 16 million people facing starvation.

A coalition of forces led by Saudi Arabia intervened in Yemen in March 2015 after the Iran-aligned Houthis ousted the Riyadh-backed government from the capital Sanaa in late 2014. The Houthis say they are fighting a corrupt system and foreign aggression.

The Houthi movement said in October they had seized new territory in the energy-rich provinces of Shabwa and Marib, gains confirmed by sources, as it presses an offensive likely to further complicate international peace efforts.

The facility includes a religious school and a mosque attended by about 1,200 Muslim students from across the country. Most of the students and teachers left the area last month as the Houthis made progress in their offensive on Marib.

Moammar al-Iryani, information minister of the internationally recognized government, said the casualties included women and children. "This horrific massacre comes after a series of systematic killings of civilians that the terrorist Houthi militia committed in the past few days” in the government-held cities of Marib and Taiz, he said, according to The Associated Press (AP). He called on the U.N. Security Council and the United States to pressure the Houthis to stop their attacks on civilians and to prosecute those implicated as "war criminals.”

A Houthi ballistic missile struck the house of a key tribal leader in al-Aumd on Thursday, killing at least 11 civilians and wounding 16 others. On Saturday, the Houthis shelled the residential Camp neighborhood on the outskirts of the government-held city of Taiz, killing at least three children from the same family.

At least six other children were wounded, according to al-Iryani. Meanwhile in Tazi, government forces and allied tribal fighters launched an offensive late Sunday on the last remining pocket held by the Houthis on the city’s the south western outskirts.

The government-run SABA news agency reported Monday that at least seven Houthi fighters were killed including a field commander, and six others were wounded.