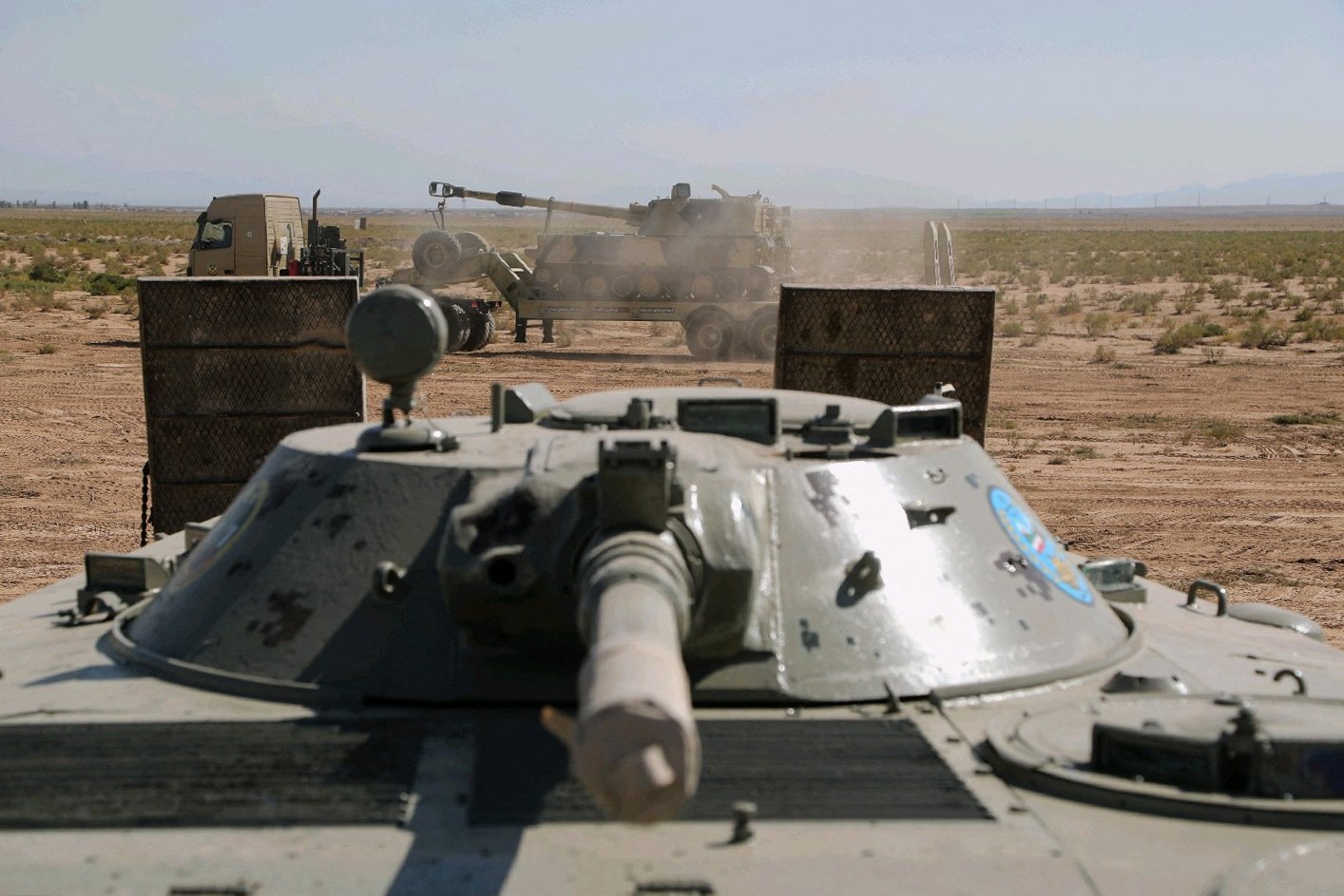 Iranian tanks during a military exercise in the northwest of the country, close to the Iranian-Azerbaijani border, Oct. 1, 2021. (Iranian Army Office via AFP)
by DAILY SABAH WITH AGENCIES Oct 01, 2021 2:45 pm
RECOMMENDED

The Iranian army launched a massive military exercise near its border with Azerbaijan on Friday, the country's state TV reported.

The drills put on display Iran's military capabilities near a neighbor who Tehran accuses of ties with the West and Israel.

Artillery, drones and helicopters will participate in the drills, the report said, without elaborating on how long they would last or where exactly they would be held.

The exercises come amid escalating tensions along the border. Iran is wary of Azerbaijan, in particular for its deep military cooperation with the country’s archrival, Israel, and on Thursday voiced its concerns to the Azerbaijani ambassador in Tehran, Ali Alizadeh.

"We do not tolerate the presence and activity against our national security of the Zionist regime, or Israel, next to our borders," Foreign Minister Hossein Amirabdollahian said. "And we will carry out any necessary action in this regard.”

Amirabdollahian described relations between Iran and Azerbaijan as "important,” but insisted Iran had the "right” to hold the exercises.

Earlier this week, Azerbaijani President Ilham Aliyev told Anadolu Agency (AA) that he was stunned by the planned exercises.

"Every country can carry out any military drill in its own territory. It's their sovereign right. But why now and why on our border?" he said, pointing out that this would be the first time since the fall of the Soviet Union that Iran is making such a show of force so close to the border.

His comments, however, were rebuffed by Iran's foreign ministry spokesman Saeed Khatibzadeh. "The drills carried out by our country in the northwest border areas ... are a question of sovereignty," Khatibzadeh said in a statement Tuesday.

During the military exercises Friday, Kioumars Heidari, the commander of the Iranian army, told the state television that Iran is also concerned about the presence of fighters "recruited" by Azerbaijan during last year's fighting in the disputed region of Nagorno-Karabakh. He said Iran has "never started any invasion," but when there was war between Armenia and Azerbaijan, a "considerable number" of "terrorists" were called to the area.

The tensions with Azerbaijan have also complicated a vital border passage that trucks use to ferry fuel and other goods from Iran to Armenia. Azerbaijani authorities have detained two Iranian truck drivers in recent weeks for trying to take the route, angering Iran.

Heidari described the presence of Israel in Azerbaijan as "disrupting security” in the region, the official IRNA news agency reported Friday.

"Our sensitivity toward the border has increased and (Israel’s) activities here are completely under our surveillance,” he said at the exercises.

The military drills come after Azerbaijan hosted joint military exercises in September with Turkish and Pakistani special forces for the first time.

The region remains on edge over Iran's growing nuclear program. Talks in Vienna to revive Tehran’s now-tattered 2015 accord with world powers have stalled since June, with no date set for their resumption.

Iran and Azerbaijan share a border of around 700 kilometers (430 miles). Ethnic Azeris make up around 10 million of Iran's 83 million people.