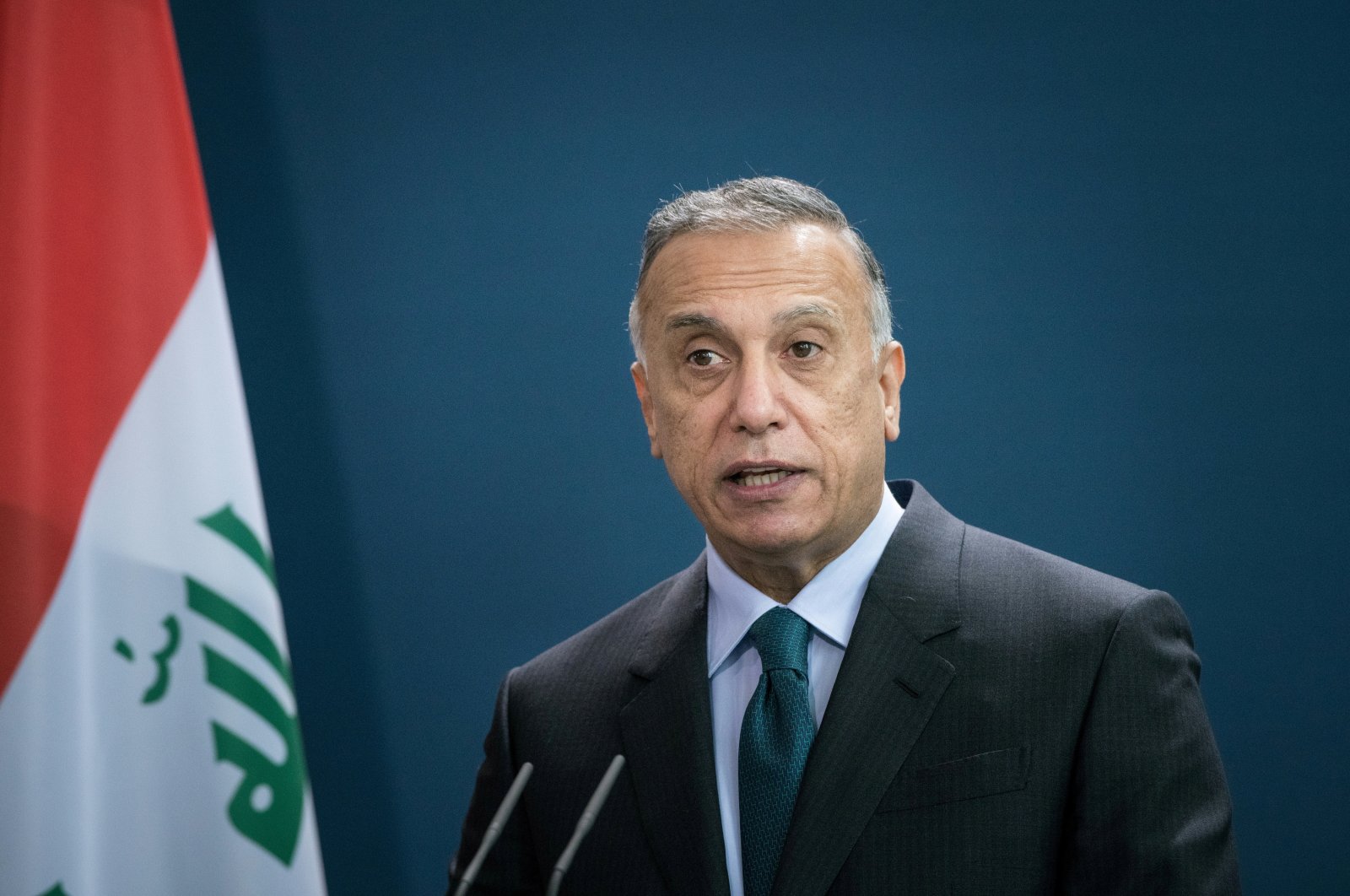 The attack was a major escalation amid tensions sparked by the refusal of Iran-backed groups to accept last month's parliamentary election results.

Two Iraqi officials told The Associated Press (AP) that seven of al-Kadhimi's security guards were injured in the attack with two armed drones that occurred in Baghdad's heavily fortified Green Zone area. They spoke on condition of anonymity because they were not authorized to give official statements.

"I am fine and among my people. Thank God," the prime minister tweeted shortly after the attack. He called for calm and restraint, "for the sake of Iraq.”

He later appeared on Iraqi television, seated behind a desk in a white shirt, looking calm and composed. "Cowardly rocket and drone attacks don’t build homelands and don’t build a future,” he said.

In a statement, the government said an explosives-laden drone tried to hit al-Kadhimi’s home. Residents of Baghdad heard the sound of an explosion followed by heavy gunfire from the direction of the Green Zone, which houses foreign embassies and government offices.

Images published by the state news agency INA showed damage to some parts of the prime minister's residence and a damaged SUV vehicle parked in the garage.

Remains of a small explosive-laden drone used in the attack were retrieved by security forces to be investigated, a security official with knowledge of the attack told Reuters.

"It's premature now to say who carried out the attack," the security official on condition of anonymity as he was not authorized to comment on security details. "We're checking our intelligence reports and waiting for initial investigation results to point the finger at perpetrators."

The statement released by state-run media said security forces were "taking the necessary measures in connection with this failed attempt.”

There was no immediate claim for the attack. It comes amid a stand-off between security forces and pro-Iran groups, whose supporters have been camped outside the Green Zone for nearly a month after they rejected the results of Iraq’s parliamentary elections in which they lost around two-thirds of their seats.

"The assassination attempt is a dramatic escalation, crossing a line in unprecedented fashion that may have violent reverberations,” wrote Ranj Alaaldin, a nonresident fellow at the Brookings Institution, in a post on Twitter.

Protests turned deadly Friday when the demonstrators tried to enter the Green Zone. Security forces used tear gas and live ammunition. There was an exchange of fire in which one protester was killed. Dozens of security forces were injured. Al-Khadimi ordered an investigation to determine what sparked the clashes and who violated orders not to open fire.

Some of the leaders of the most powerful factions loyal to Iran openly blamed al-Kadhimi for Friday's clashes and the protester's death.

"The blood of martyrs is to hold you accountable,” said Qais al-Khazali, leader of the Asaib Ahl al-Haq group, addressing al-Kadhimi at a funeral held for the protester Saturday. "The protesters only had one demand against fraud in elections. Responding like this (with live fire) means you are the first responsible for this fraud.”

The funeral was attended by leaders of the mostly Shiite Iran-backed factions who together are known as the Popular Mobilization Forces, or Hashd al-Shaabi in Arabic.

Abu Alaa al-Walae, commander of Kataib Sayyid al-Shuhada, in a tweet apparently addressed to al-Kadhimi that did not name him told him to forget about another term.

Al-Kadhimi, 54, was Iraq's former intelligence chief before becoming prime minister in May last year. He is considered by the militias to be close to the U.S., and has tried to balance between Iraq's alliances with both the U.S. and Iran. Prior to the elections, he hosted several rounds of talks between regional foes Iran and Saudi Arabia in Baghdad in a bid to ease regional tensions.

Ali Shamkhani, secretary of Iran’s national security council, said indirectly in a tweet Sunday that the United States was behind the attack. The assault on al-Kadhimi "is a new sedition that must be traced back to foreign think tanks, which have brought nothing but insecurity, discord & instability to oppressed Iraqi people through creation & support of terrorist groups & occupation of this country for years,” he said

The U.S. strongly denounced the attack.

"This apparent act of terrorism, which we strongly condemn, was directed at the heart of the Iraqi state,” said State Department spokesperson Ned Price.

"We are in close touch with the Iraqi security forces charged with upholding Iraq’s sovereignty and independence and have offered our assistance as they investigate this attack,” he added.

Turkey said it will continue to be on the side of the Iraqi people and state in the country's fight against terrorism, whatever its source. In a written statement, the Turkish Foreign Ministry strongly condemned the attack on al-Kadhimi.

“We hope that the perpetrators of this cowardly attack, which is clearly targeting to damage Iraq’s sovereignty and stability, are ensured to give account before justice," it said.

Egypt’s President Abdel-Fattah el-Sissi also condemned the assassination attempt. Writing on Facebook, he called on all sides in Iraq to "calm down, renounce violence and join forces to preserve the country’s stability.”

"May God protect Iraq and its people from all harm and may they live free, proud and independent,” he wrote.

Meanwhile, a security official from the Iran-backed Hezbollah group dismissed suggestions on Sunday that Iraqi groups were behind the attack on al-Kadhimi.

"According to our confirmed information, no-one in Iraq has the desire to waste a drone on the house of a former prime minister," Abu Ali Al-Askari said on Telegram.

The United States, the U.N. Security Council and others have praised the Oct. 10 election, which was mostly violence-free and without major technical glitches.

But following the vote, pro-Iranian supporters pitched tents near the Green Zone, rejecting the election results and threatening violence unless their demands for a recount were met.

The unsubstantiated claims of voter fraud have cast a shadow over the vote. The standoff with the Iranian-backed supporters has also increased tensions among rival Shiite factions that could spill into violence and threaten Iraq’s newfound relative stability.

The election was held months ahead of schedule in response to mass protests in late 2019, which saw tens of thousands in Baghdad and predominantly Shiite southern provinces rally against endemic corruption, poor services and unemployment. They also protested against the heavy-handed interference of neighboring Iran in Iraq’s affairs through Iran-backed groups.

The militias lost some popularity since the 2018 vote, when they made big election gains. Many hold them responsible for suppressing the 2019 protests, and for challenging the state’s authority.

The biggest gains were made by influential Shiite cleric Muqtada al-Sadr, who won the largest number of parliament seats, 73 out of 329. While he maintains good relations with Iran, al-Sadr publicly opposes external interference in Iraq’s affairs.