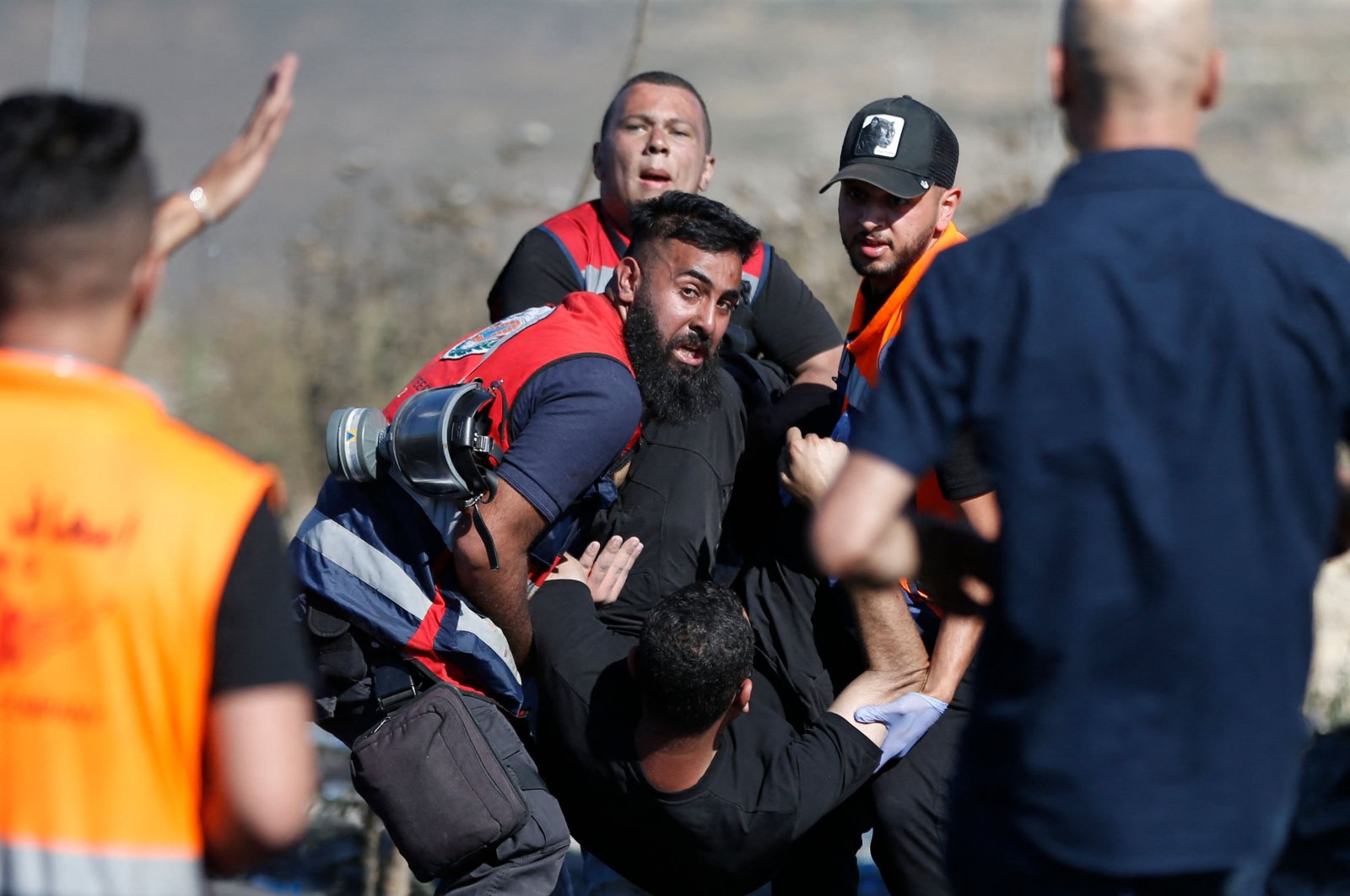 Palestinian paramedics evacuate a wounded protester injured by Israeli security forces near the settlement of Beit El and Ramallah in the occupied West Bank, Palestine, on May 17, 2021. (AFP Photo)
by Agencies May 19, 2021 3:13 pm
RECOMMENDED

In a televised address Wednesday, he said the Palestinians "will not hesitate to pursue those who commit such crimes in front of international courts.”

Abbas, who is the head of the internationally backed Palestinian Authority (PA), whose forces were driven from Gaza when Hamas came into power in 2007, accused Israel of "brutal attacks on civilians and deliberate bombardment of homes,” as the Associated Press (AP) reported.

Meanwhile, Israeli Prime Minister Benjamin Netanyahu said Wednesday the bombing campaign on the Gaza Strip aims to deter Hamas but did not rule out a campaign to "conquer" the enclave's rulers.

"There are only two ways that you can deal with them," he said about Hamas in a Tel Aviv briefing for a group of foreign ambassadors. "You can either conquer them, and that's always an open possibility, or you can deter them, and we are engaged right now in forceful deterrence, but I have to say we don't rule out anything."

According to Gaza health officials 221 Palestinians have been killed, including 63 children, and more than 1,530 wounded since the fighting began on May 10. The death toll from Israeli raids against Palestinians in the occupied West Bank has risen to four, the Palestinian Health Ministry said Wednesday. The number of people who have been displaced by Israel's ongoing offensive on the Gaza Strip has soared to over 58,000, the U.N. said Tuesday.

Israel asserted on Wednesday it was not setting a timeframe for an end to hostilities with Gaza as its military pounded the Palestinian enclave with airstrikes, killing another six people.

In a sign of diplomatic movement, however, an Egyptian security source said the two sides had agreed to a cease-fire in principle after help from mediators, but details were being negotiated in secret amid public denials of a deal to prevent it from collapsing.

In remarks reported by Israeli media from a closed question-and-answer session, he was quoted as saying: "We're not standing with a stopwatch. We want to achieve the goals of the operation. Previous operations lasted a long time so it is not possible to set a timeframe," according to Agence France-Presse (AFP).

Nearly 450 buildings in densely populated Gaza have been destroyed or badly damaged, including six hospitals and nine primary care health centers, and more than 52,000 Palestinians have been displaced, the U.N. humanitarian agency said.

The damage has left large craters and piles of rubble across the coastal enclave, and deepened long-running concerns about living conditions in Gaza.

"Whoever wants to learn about the humanity of the (Israelis) should come to the Gaza Strip and look at the houses that got destroyed on top of those who lived in them," said university lecturer Ahmed al-Astal, standing by the rubble of his house in Khan Younis in southern Gaza. He said there had been no warning before his home was destroyed in an airstrike before dawn.

Meanwhile, a senior Russian official warned Israel's ambassador on Wednesday that actions that led to a further increase in civilian casualties in Gaza were unacceptable, Russia's foreign ministry said.

A French government spokesman said "very intense discussions” are underway with the United States about a United Nations Security Council resolution that has been proposed by France in coordination with Egypt and Jordan. The proposed resolution aims at ending hostilities between Israel and Hamas. The United States has blocked the U.N.’s most powerful body from issuing a press statement calling for a halt to the violence, insisting that it would not help diplomatic efforts to end the conflict.

French President Emmanuel Macron and Egyptian President Abdel Fattah el-Sissi held talks in Paris earlier this week on the issue and they had a meeting on Tuesday with Jordan’s King Abdullah II via video conference. In a joint statement, France, Egypt and Jordan said they "called on the parties to immediately agree on a ceasefire.” They also said they will work with the U.N. and other partners to ensure humanitarian help for the population of Gaza.