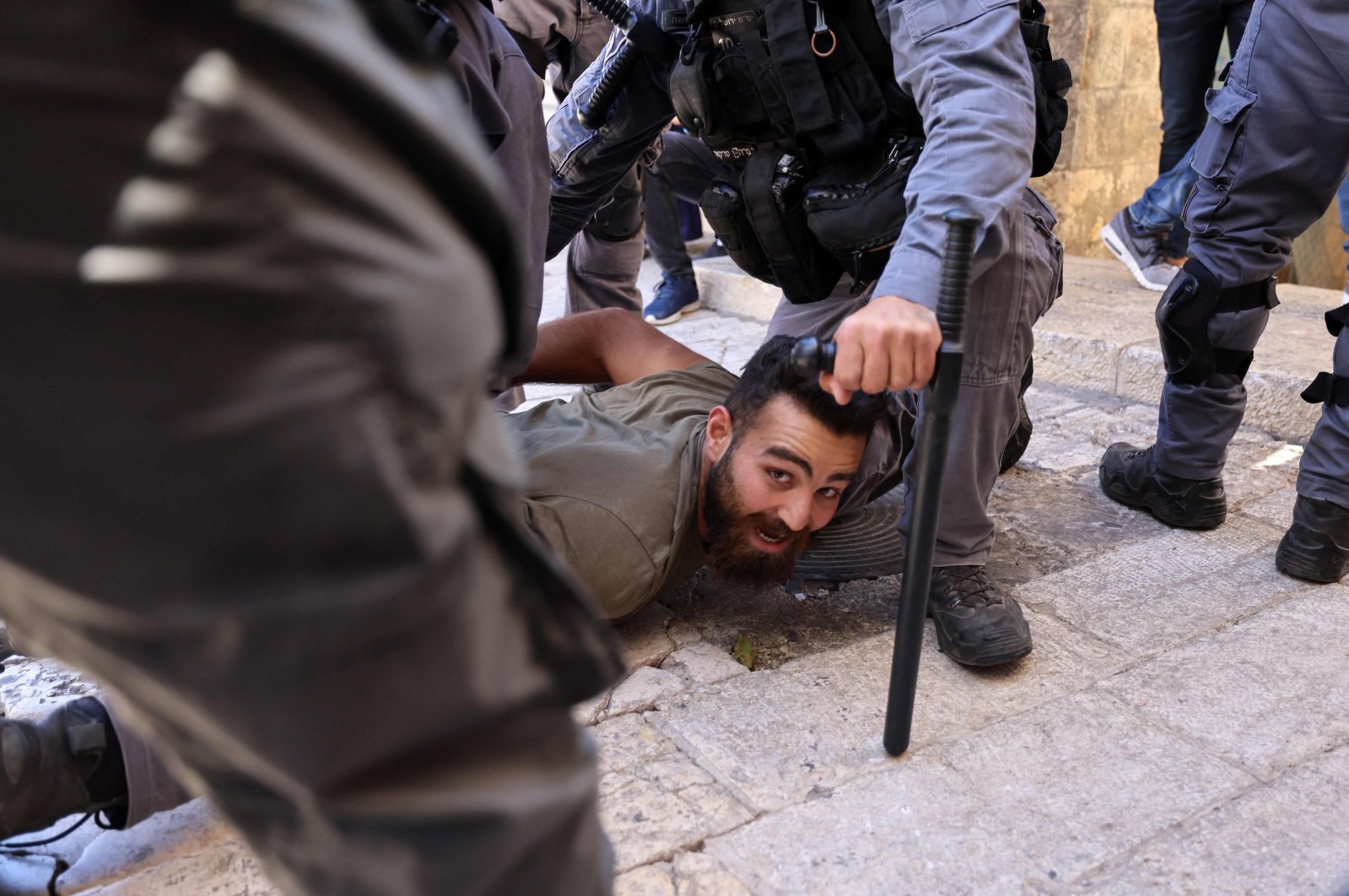 Israeli border police detain a Palestinian man during protests against Israel's occupation and its air campaign on the Gaza strip, at Damascus Gate in East Jerusalem, occupied Palestine, on May 18, 2021. (AFP Photo)
by Agencies May 18, 2021 3:49 pm
RECOMMENDED

In a statement, the society said five people were injured by live bullets, another five by rubber bullets, while 84 suffered from gas inhalation. Three others sustained injuries as a result of beatings, burns and falling during the confrontations.

The violence came as Palestinians staged a nationwide general strike across the occupied West Bank and Arab towns in Israel on Tuesday to protest the ongoing Israeli attacks on the Gaza Strip in what the organizers described as a "day of anger.”

Shops, business centers, civil institutions, banks and universities shut their doors across the West Bank, interspersed with popular rallies and confrontations with Israeli forces at points of contact.

"The Palestinian people proved to be united against oppression, occupation and aggression," Tawfiq Tirawi, a member of Fatah's Central Committee, said during a rally in central Ramallah.

It was a show of unity among Palestinian citizens of Israel, who make up 20% of its population and those in the territories Israel seized in 1967 that the Palestinians have long sought for a future state of their own. Life had already ground to a halt in Gaza when the fighting began. The strike was intended to protest the Gaza war and Israeli policies that many activists and some rights groups say constitute an overarching system of apartheid that denies Palestinians the rights afforded to Israelis, as reported by The Associated Press (AP).

Israel rejects that characterization, saying its citizens have equal rights. It blames the war on resistance group Hamas that controls Gaza and accuses it of inciting violence across the region. Leaders of the Palestinian community in Israel called the strike, which was embraced by the internationally-backed Palestinian Authority (PA) in the occupied West Bank, where ministries and schools were closed.

Most businesses appeared to be observing the strike, and protests were expected. Muhammad Barakeh, one of the organizers of the strike, said Palestinians are expressing a "collective position” against Israel's "aggression” in Gaza and Jerusalem, as well as the "brutal repression” by police across Israel. The war has also seen an unusual outbreak of violence in Israel, with groups of Jewish and Palestinian citizens fighting in the streets and torching vehicles and buildings. In both Israel and the West Bank, Palestinian protesters have clashed with Israeli forces.

At least 213 Palestinians have been killed, including 61 children and 36 women, and 1,442 others injured in Israeli attacks on the Gaza Strip since May 10, according to the Palestinian Health Ministry.

Hundreds of people attended the funeral procession for a 17-year-old Palestinian, who was shot dead by Israeli forces during clashes in Hebron on Monday. Palestinians also staged a protest near the Israel-controlled Huwara checkpoint in Nablus to demand an end to Israeli attacks in Gaza.

"The strike is an expression of anger against this barbaric aggression by the Israeli occupation state and international silence toward (Israeli) aggression against our people in Jerusalem, Sheikh Jarrah neighborhood and Gaza,” Fahmi Shaheen, the coordinator of the national and Islamic forces in Hebron, told Anadolu Agency (AA). "This strike acquires a special importance because it is joined by all the Palestinian people across historic Palestine,” he said.

The recent tensions that started in East Jerusalem during the Muslim holy month of Ramadan spread to Gaza as a result of Israeli assaults on worshippers in the flashpoint Al-Aqsa Mosque compound and Sheikh Jarrah neighborhood.