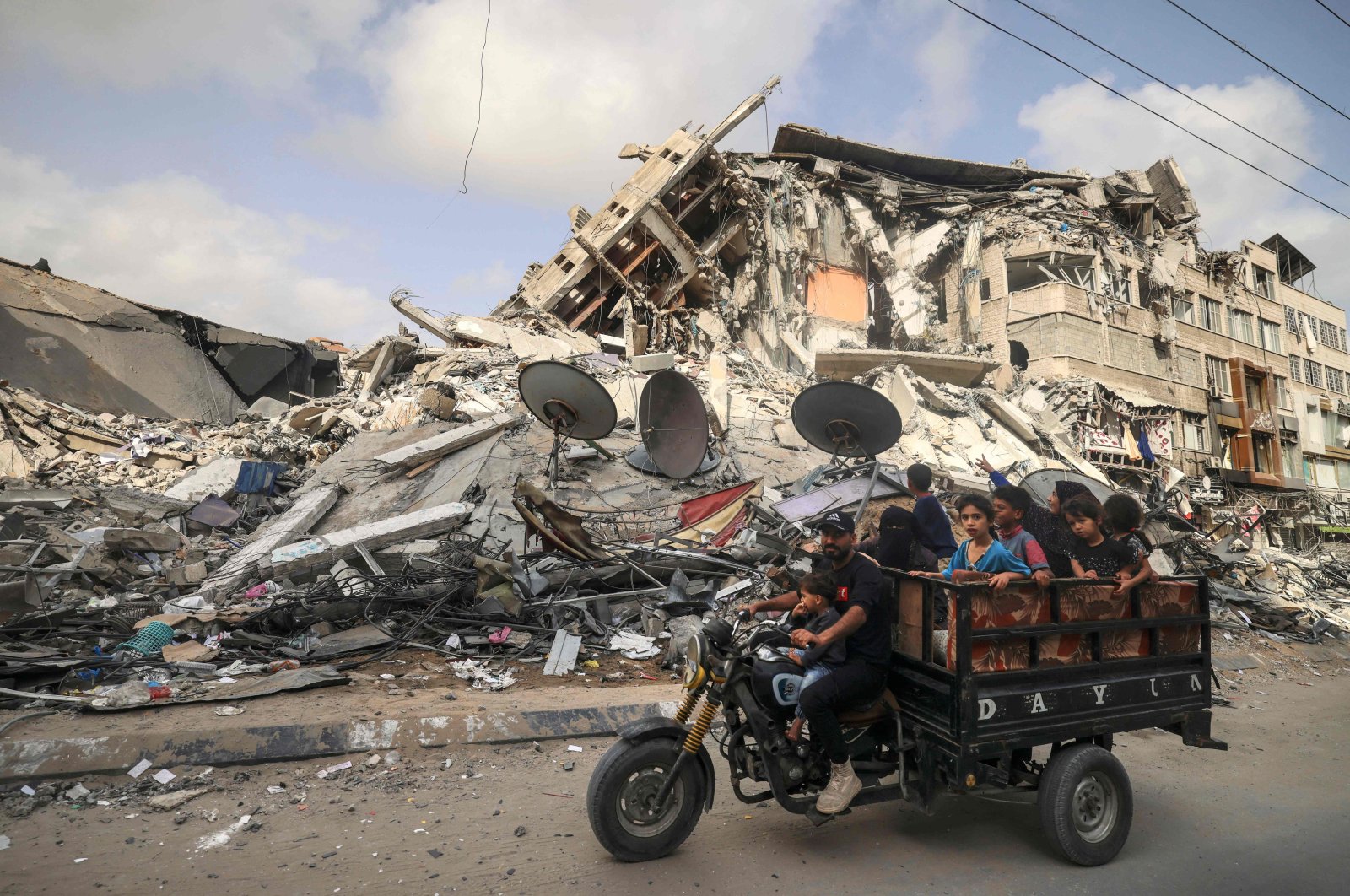 A Palestinian man transports children in a tricycle past the Al-Shuruq building, destroyed by an Israeli airstrike, after a cease-fire was agreed upon between Israel and Hamas, in Gaza City, Palestine, May 21, 2021. (AFP Photo)
by Daily Sabah with Reuters Jun 28, 2021 1:59 pm
RECOMMENDED

Reconstruction of Gaza after last month's fighting between Israel and Hamas is being held up by a dispute over the fate of Israelis held by the resistance Palestinian group and a lack of clarity over how to prevent it from accessing aid funds, officials say.

The Gaza government says 2,200 homes were destroyed and 37,000 damaged by Israeli shelling during the 11 days. Rebuilding those dwellings and the wider Gaza infrastructure will cost some $500 million, the government says.

Egypt and Qatar, which helped broker a May 21 truce, have pledged $500 million each for reconstruction in the Palestinian enclave, two-thirds of whose 2 million residents rely on aid.

However, Israel says that can proceed only if it makes headway in efforts to recover two soldiers missing in action in a 2014 Gaza war as well as two civilians who slipped separately into the enclave.

"It's reconstruction in exchange for progress on the missing," a senior Israeli official told Reuters, declining to specify what Israel – which has declared the two missing soldiers dead – would consider "progress."

Hamas says talks about them must be based on a swap for Palestinians imprisoned in Israel, not aid.

Israeli Prime Minister Naftali Bennett has long opposed releasing jailed Palestinians. According to the Commission on Detainees and Ex-Detainees Affairs, a local nongovernmental organization (NGO), some 1 million Palestinians have been arrested by Israeli forces since the 1967 Middle East war.

"A total of 226 detainees have died inside Israeli prisons since 1967,” it asserted, highlighting that all those detained experienced "some form of physical or psychological torture, moral abuse and cruel treatment.”

Around 4,500 Palestinians are believed to be held in Israeli prisons, including 41 women, 140 minors and 440 administrative detainees, according to data compiled by organizations on the rights of prisoners. During the 1967 Middle East war, Israel occupied the West Bank, East Jerusalem, Syria's Golan Heights and Egypt's Sinai Peninsula, which was later returned to Egypt under the country's 1979 peace deal with Israel.

With the cease-fire largely holding, Israel on Monday began allowing fuel into Gaza for the first time in weeks, after easing up import and export restrictions on the Strip last week. But the prospect for aid has been complicated by Israel's demand, which claimed that Hamas uses funds for a military buildup. Hamas denies this.

The Biden administration wants to involve internationally backed Palestinian President Mahmoud Abbas in the Gaza reconstruction. But Abbas has not wielded clout in Gaza since losing control of it to Hamas in a brief 2007 civil war.

One of Hamas' appointees, Deputy Minister of Public Works and Housing Naji Sarhan, said mediators were months away from coming up with a workable funding mechanism. Sarhan, who has taken part in Cairo-based talks, said rubble from the May fighting would be cleared by the end of July and that "within three months, I think, we will see the start of the reconstruction of Gaza, especially the buildings and the roads infrastructure. This is what we are hearing."

Sam Rose, the officer in charge of Gaza affairs for the U.N. Relief and Works Agency for Palestine Refugees in the Near East (UNRWA), told Reuters last week that the agency launched a $162 million campaign for early recovery plans, including humanitarian assistance to displaced families. Asked when rebuilding could begin, Rose said: "I can't give you a time frame right now. It depends upon facts beyond our control."