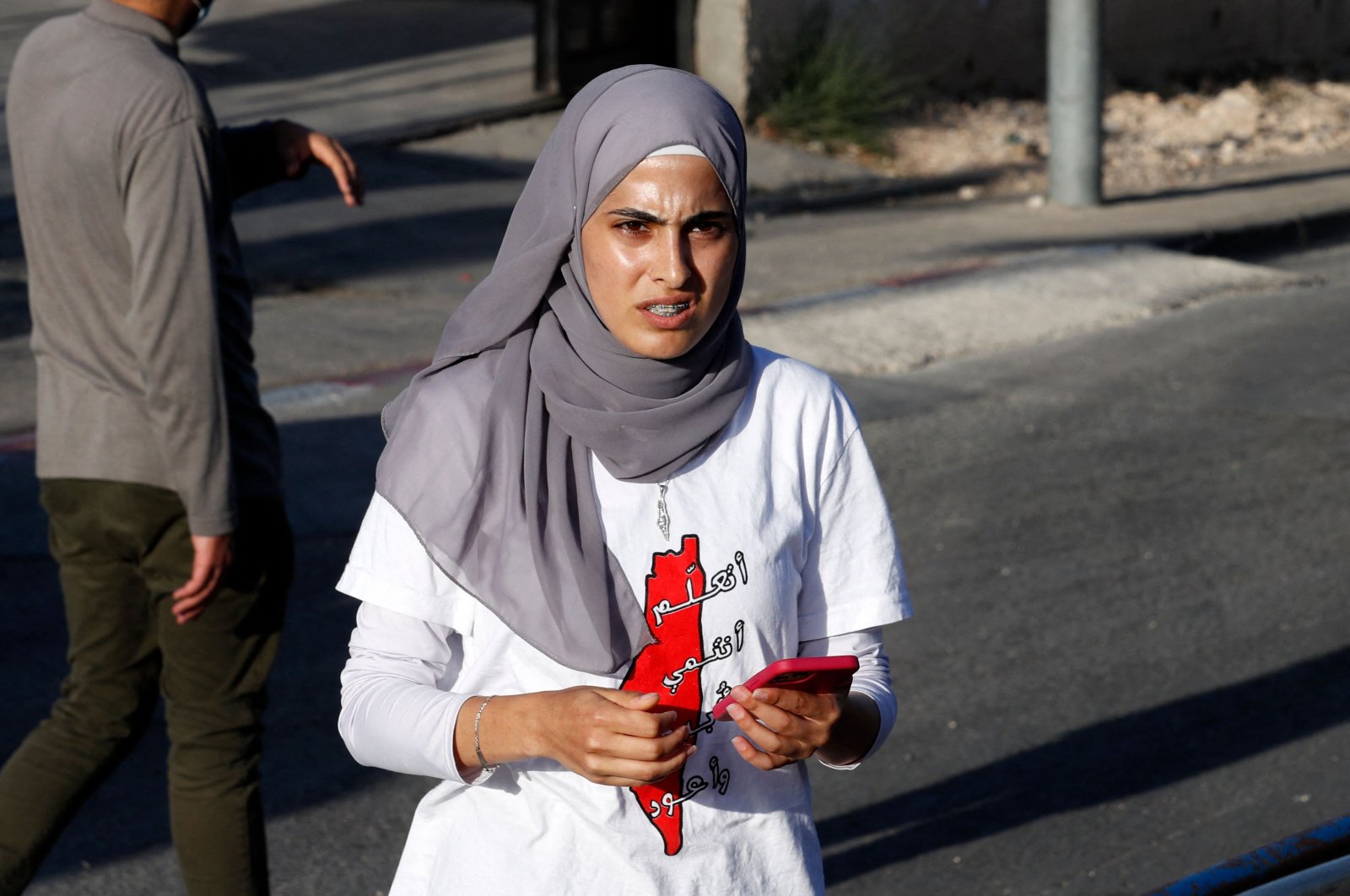 In this file photo taken on May 29, 2021, Palestinian activist Muna el-Kurd takes part in a rally to demand the reopening of the Israeli police checkpoint at the entrance of the Sheikh Jarrah neighborhood in occupied East Jerusalem, Palestine. (AFP Photo)
by Agencies Jun 06, 2021 1:35 pm
RECOMMENDED

Israeli police detained two prominent Palestinian activists Muna al-Kurd and her brother Mohammed al-Kurd in the Sheikh Jarrah neighborhood of occupied East Jerusalem on Sunday after a raid on her home, her family said.

Supporters of Muna and Mohammed, who are twins, say their detention is part of a broader Israeli effort to halt opposition to forced expulsion in Sheikh Jarrah, where Jewish settlers want to move into the al-Kurds' home and others under an Israeli court ruling.

Local residents said after the police raided the 23-year-old activist's home, she was transported by the authorities to an unknown location. Her father, Nabil al-Kurd, confirmed his daughter's detention by Israeli forces.

He said Israeli police "stormed the house in large numbers and in a barbaric manner,” saying they wanted to arrest Muna and her 22-year-old brother.

"I was sleeping and I found them in my bedroom,” Nabil told The Associated Press (AP) in a telephone interview. While his son was not home, police searched the house and arrested Muna, one of the most widely-known activists resisting the Israeli eviction drive. Video posted on social media, confirmed by Nabil, showed Muna being taken from the home in handcuffs.

"Police are also looking for my son Mohammed, who was briefly detained last month,” he said, according to remarks carried by Anadolu Agency (AA).

Without explicitly naming Muna al-Kurd, an Israeli police spokeswoman said "police arrested under court order a suspect (23) who is a resident of East Jerusalem, on suspicion of participating in riots that took place in Sheikh Jarrah recently". Police did not immediately comment on her twin brother Mohammed, who turned himself in at a police station in East Jerusalem after receiving a police summons, as Agence France-Presse (AFP) reported.

Muna al-Kurd, who earned a degree in communications and journalism, belongs to one of 27 Palestinian families who face the threat of expulsion in the Sheikh Jarrah neighborhood. She is one of the Palestinian women leading protests against Israel's forced expulsion and threats of displacement in Sheikh Jarrah.

In April, an Israeli court ruled to evict eight Palestinian families from their homes in the Sheikh Jarrah neighborhood in favor of settlement groups, triggering tension across the Palestinian territories.

Israeli authorities, however, postponed giving a final decision on the expulsion orders until December due in part to international pressure and mass protests by Palestinians. The mass protests had been fueled by rising tension in Sheikh Jarrah that reached a flashpoint on May 10. Several incidents kicked off 11 days of fighting between Israel and Palestinian resistance groups in Gaza, which in the end saw 254 people killed in Gaza.

The most imminent Jerusalem expulsions are on hold, following the intervention by Israel’s attorney general, but Israeli settlers' campaign continues. Rights groups fear the expuslons could still be carried out in the coming months as international attention wanes, potentially igniting another round of bloodshed.