Israel to maintain illegal evictions of Palestinians in East Jerusalem 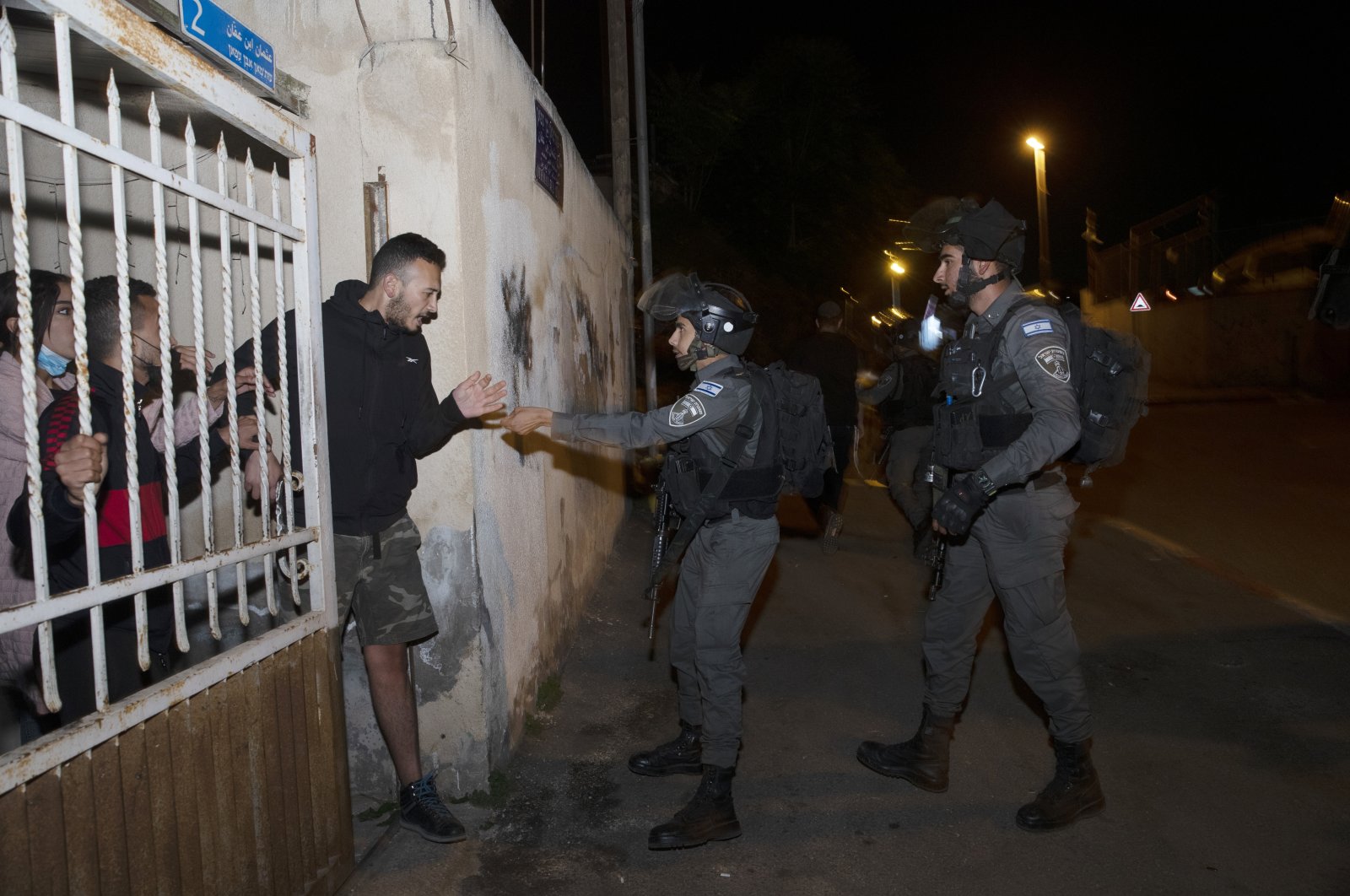 Even though an Israeli court has suspended the eviction of Palestinian families in the occupied territories, human rights defenders and activists are confident that Tel Aviv plans to continue its forced evictions, arguing that Israel is simply waiting for the international community to avert its gaze

After an Israeli offensive campaign spanning days in the Gaza Strip, followed by a week of unrest across the occupied territories, Israel plans to maintain its long-running campaign to evict dozens of Palestinian families in East Jerusalem, experts say.

An intervention by Israel's attorney general at the height of the unrest has put the most imminent evictions on hold. But rights groups say evictions could still proceed in the coming months as international attention wanes, potentially igniting another round of bloodshed.

Tel Aviv has been waging a decadeslong campaign to evict the families from densely populated Palestinian neighborhoods in the so-called Holy Basin just outside the walls of the Old City, in one of the most sensitive parts of East Jerusalem.

Israel captured East Jerusalem, home to holy sites sacred to Muslims, Jews and Christians in the 1967 war, annexing it in a move not recognized internationally. Israel views the entire city as its capital, while the Palestinians want East Jerusalem as the capital of their future state.

The Israeli settlers are using a 1970 law that allows Jews to reclaim properties lost during the 1948 war surrounding Israel's creation, a right denied to Palestinians who lost property in the same conflict, including Palestinian citizens of Israel. The Israeli rights group Ir Amim, which closely follows the various court cases, estimates that at least 150 households in the neighborhoods of Sheikh Jarrah and Batn al-Hawa area Silwan have been served with eviction notices and are at various stages in a long legal process.

The plight of four extended families comprising of six households in Sheikh Jarrah, who were at risk of imminent eviction, triggered protests that eventually merged with demonstrations over the policing of a flashpoint holy site. Tel Aviv's crackdown on Palestinians triggered heavy fighting between Israel and Hamas resistance group that rules Gaza.

As tensions rose, Israel's Attorney General Avichai Mandelblit secured the postponement of the final hearing in the case of the four families. Another group of families requested that the attorney general also intervene in their cases, securing a delay. Israelis are currently trying to form a new government, adding more uncertainty to the process. That has bought time for the families, but nothing has been resolved. Palestinians say the "Judaisation" of East Jerusalem, including the expulsion, will continue.

"Everything is very much hanging in the balance," said Amy Cohen, a spokesperson for Ir Amim. Rights advocates fear Israel will proceed with the evictions once the furor dies down and international attention turns elsewhere. "We’re talking about over 1,000 Palestinians in both these two areas that are at risk of mass displacement," Cohen said. "Because these measures are taking place in such an incremental manner, it’s so much easier to dismiss.”

The families in Sheikh Jarrah are stuck in limbo. A total of at least 65 families in two areas of the neighborhood are threatened with eviction, according to Ir Amim, including a group of families set to be evicted in August.

According to The Associated Press (AP) banners hang in the street in Sheikh Jarrah, and protests are still held there. Police checkpoints are located at either end of the road and keep watch as Jewish settlers – who seized one of the homes in 2009 – come and go.

The Israeli settlers say they acquired the land from Jews who owned it before the 1948 war, when Jordan captured what is now East Jerusalem and the occupied West Bank. Jordan settled several Palestinian families on the land in the early 1950s after they fled from what is now Israel during the 1948 war. Settlers began trying to evict them shortly after Israel captured the West Bank and East Jerusalem in the 1967 war. For Palestinians, the evictions conjure bitter memories of what they refer to as the nakba, or "catastrophe,” of Israel's creation, when some 700,000 Palestinians – a majority of the population – fled or were driven from their homes. Most ended up in refugee camps in the West Bank, Gaza and neighboring countries.

"This isn’t just about Sheikh Jarrah, it’s about the entire Israeli occupation, that’s the problem. They aren’t going to stop here,” says Saleh al-Diab, who was born, grew up, married and raised his own children in one of the homes under threat in Sheikh Jarrah. "You lose your home to them in 1948 and then they come back after 1967 and take your home again,” he said.

Ir Amim estimates that settler organizations have already evicted 10 families in Sheikh Jarrah and at least 74 families in Silwan, a few kilometers (miles) away, in the last few decades.

"The families were told for the first time about the expulsions in November 2020, and the decision was confirmed in March 2021," he told Agence France-Presse (AFP).

In the 1980s, settlers began moving into Silwan, which sits on land where – according to Jewish tradition – King David established his capital some 3,000 years ago, making the area hallowed ground in Jewish history. There are now several hundred settlers in Silwan, living among some 50,000 Palestinians.

Settlers have cited 19th-century documents from the Ottoman Empire, which controlled Jerusalem before the British mandate era began in 1920, showing that Silwan land was owned by a Jewish trust. Palestinian families say Israeli courts do not recognize their ownership documents from the Jordanian authorities.

Activists say that the law is discriminatory and does not offer any recourse to Palestinians who may have lost land during the same period, including for example homes in now Israeli west Jerusalem. Amnesty International's deputy director for the Middle East and North Africa, Saleh Higazi, said the situation is yet another example of Israel's "criminal policy of forcibly displacing Palestinians."

“For years, Israel has sought to expand illegal settlements in the area of Silwan, forcibly displacing more than 200 Palestinians from their homes,” Hijazi said. “By continuing to pursue this court case – after the outcry over the planned expulsions in Sheikh Jarrah in occupied East Jerusalem – Israel is fanning the flames of the latest surge in violence and perpetuating the same systematic human rights violations against Palestinians that are at the root of the latest violence.”

Facing mounting pressure from the international community, which opposes the illegal occupation of Palestinian territories, Israel said the evictions are a private real estate dispute and accused Hamas of using the issue to incite violence.

The settler movement enjoys strong support from the Israeli government and the right-wing parties that dominate Israeli politics. The settlers have benefitted from Israeli policies going back to 1967 that have encouraged the expansion of Jewish settlements in the occupied West Bank and East Jerusalem while severely restricting the growth of Palestinian communities. Today, more than 700,000 Jewish settlers live in both territories, mostly in built-up residential towns and neighborhoods.

Peace Now say the planned expulsions were part of broader plans by Israeli settler movements, in coordination with the Israeli authorities, to expel about 100 families from Batan al-Hawa on the basis of pre-1948 claims of ownership. Although a number of settlers who lived in the pre-1948 area received financial compensation from the government, Israeli law asserts that Palestinians displaced from West Jerusalem and other areas within Israel's Green Line are not eligible for compensation and that they do not have legal rights to reclaim their land.

The Palestinians and much of the international community view Israeli settlements as a violation of international law and a major obstacle to peace. Ir Amim says Israeli authorities could intervene in any number of ways to prevent the Jerusalem evictions, including by modifying the law that allows settlers to take over such properties.

Hamas has demanded that Israel rein in the settlers as part of the informal truce brokered by Egypt that ended the Gaza war. Egyptian mediators are exploring ways to prevent the evictions, and previous cease-fires have included significant concessions to Hamas. A war that destroyed hundreds of homes in Gaza may have ensured that residents of Sheikh Jarrah can remain in theirs, at least for now.

During Israeli airstrikes, at least 250 people were killed, including 69 children and 39 women. Nearly 2,000 were injured, while thousands left without shelter as Israel bombed a number of residential buildings, medical facilities and educational centers.