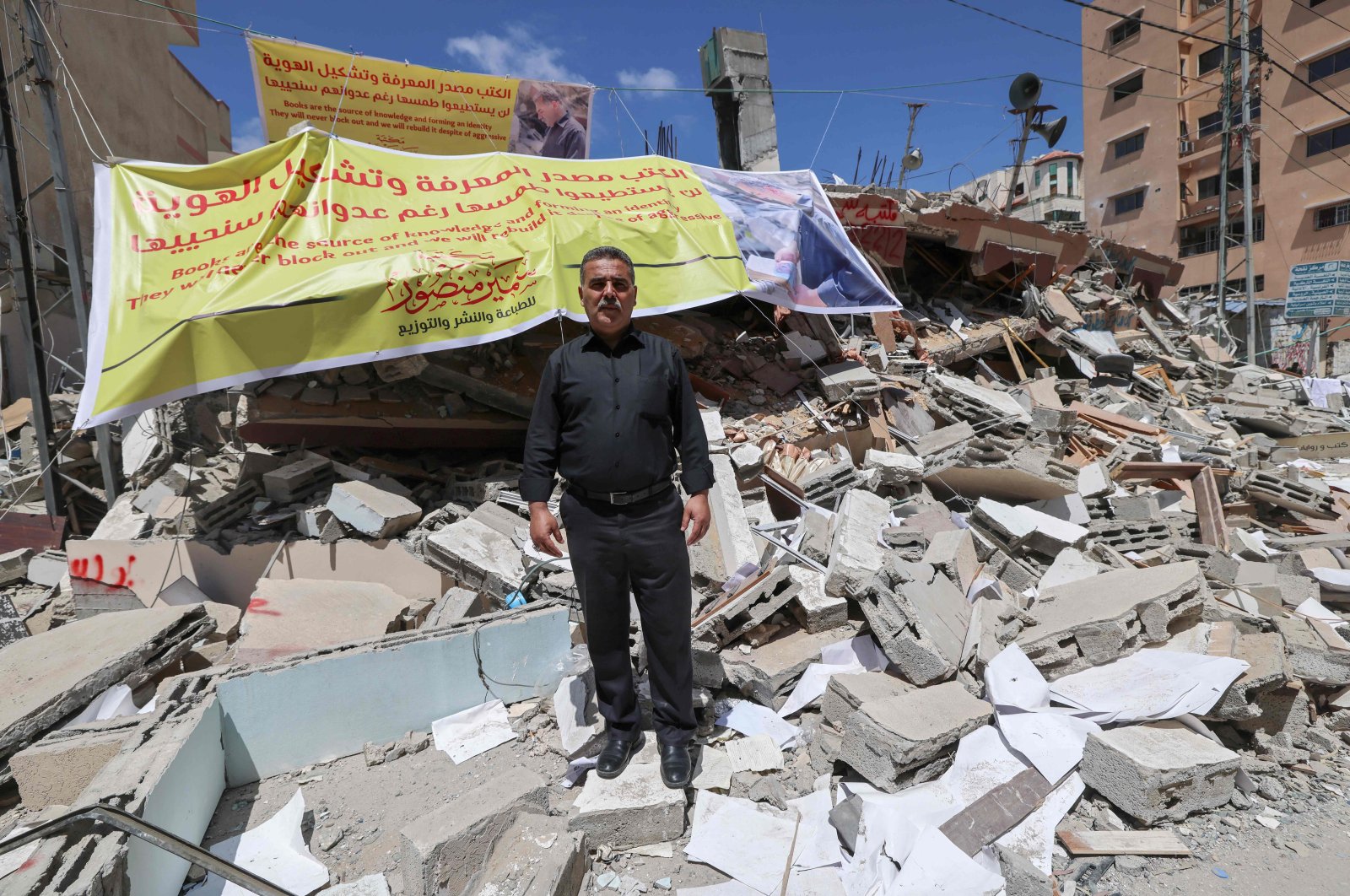 Samir Mansour, Palestinian owner of the eponymous bookstore and publishing house that had the largest collection of English literature in Gaza, standing in front of the rubble of his bookshop after it was destroyed by Israeli airstrikes, Gaza City, Palestine, May 22, 2021 (AFP Photo)
by French Press Agency - AFP May 23, 2021 7:13 pm

Prior to the latest Israeli attacks on Palestine, the country's inhabitants in the blockaded Gaza Strip had for decades bought books on numerous topics – from school texts to the Quran to Arabic translations of European literary classics – from Samir Mansour Bookstore.

But last Tuesday, owner Samir al-Mansour watched in disbelief as the bookshop and publishing house he had poured his life into was bombarded by an Israeli airstrike and destroyed.

"Forty years of my life were obliterated in less than a second," said the man in his 50s, a cigarette between his fingers, staring at a mound of concrete, paper and squashed plastic chairs.

At around 5 a.m. Tuesday, Mansour was at home watching television when the channel reported the Israeli air force was about to hit the building housing his bookshop.

Mansour rushed over, but came to a dead stop some 200 meters (220 yards) away from the building, just in time to see a missile obliterate his life's work.

Tension escalated across the Palestinian territories last month over an Israeli court verdict to force Palestinian families out of their homes in the Sheikh Jarrah neighborhood in favor of Israeli settler groups. The situation worsened after Israeli forces raided the Al-Aqsa Mosque and assaulted worshippers inside. The tension spread to the Gaza Strip, with Israel launching airstrikes and artillery bombardments that killed at least 279 Palestinians, including 69 children and 40 women, and wounding more than 1,900 Palestinians, while 12 Israelis died and 357 others were wounded.

"I have nothing to do with an armed group, a political faction," Mansour told Agence France-Presse (AFP).

"It's an attack on culture."

Mansour started working in his father's bookshop in the 1980s, when he was just 14 years old, then took over in 2000 and soon branched out into publishing.

As rescue workers continue to look for bodies and survivors in the rubble after the cease-fire, Mansour was mourning all that he has lost.

Buried in the rubble were copies of Islamic religious texts, children's picture books and a copy of Fyodor Dostoevsky's "The Brothers Karamazov."

Mansour said he had lived through two Palestinian uprisings and three Gaza wars.

"But this had never happened, my bookshop was never destroyed," he said.

His son-in-law Montasser Saleh had arrived in Gaza from Norway to visit the family just before the conflict started, and was with him when his life was turned upside down.

"We were at home, watching television," Saleh said.

He recounted how on TV channel Al Jazeera "they said there had been a warning shot on the building containing the bookshop."

He too said they immediately rushed over to the building.

"Samir wanted to go and grab some papers, his computer, but he was too frightened to go in and be hit by a missile, so we stayed outside," he said.

Mosaab Abu Toha, a poet and the founder of the Edward Said library established after the Gaza war in 2014, said the Gaza Strip had lost "one of its main cultural resources."

"Mansour was more than a bookshop," he said. "It was a publishing house publishing Gazan writers."

"The books were printed in Egypt – some to come back to Gaza, but others to stay there and be circulated around the Arab world," Toha said.

"It was a way to lift the siege on Gaza through literature," he said of the yearslong Israeli blockade on the Palestinian territory in place since 2007.

For Gazan readers, the publishing house had printed around 1,000 copies of the works of local authors such as Ghareeb Askalani and Yusri al-Ghoul.

Mansour is not the only book or stationery shop destroyed in the latest Israeli bombing campaign.

Nearby Iqraa was also leveled, and the Al-Nahda stationery and bookshop was reduced to a pile of pulverized cinderblocks.

In front of what remains of Al-Nahda, a poster assured loyal customers it would re-open soon.

Israel occupied East Jerusalem, where Al-Aqsa Mosque is located, during the 1967 Arab-Israeli War. It annexed the entire city in 1980 in a move never recognized by the international community.