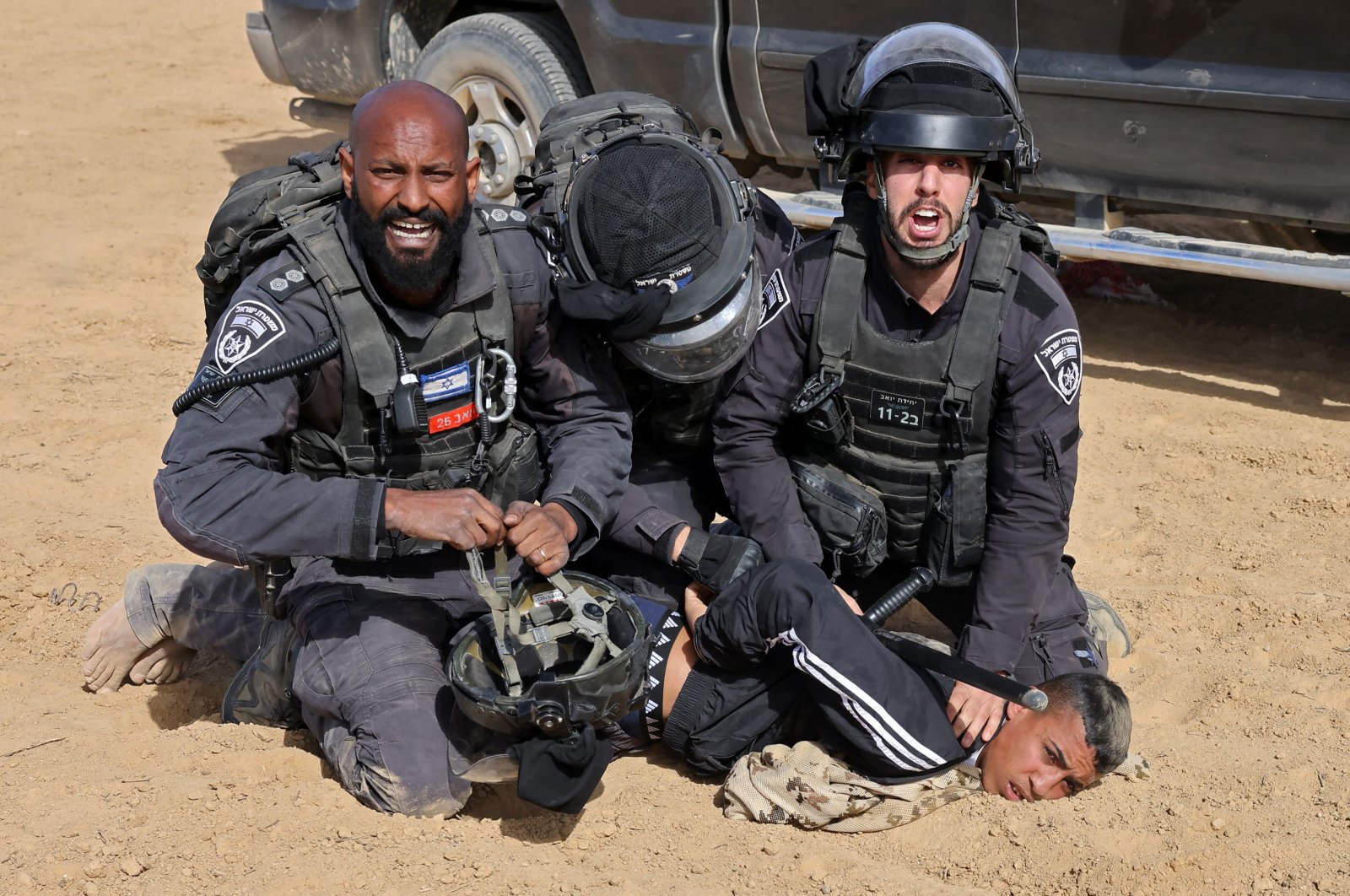 Three heavily armed Israeli officers pose as they brutally detain a child, as Bedouins protest in the southern Israeli village of Sawe al-Atrash in the Negev Desert against an afforestation project, Jan. 12, 2022. (AFP Photo)
by French Press Agency - AFP Jan 15, 2022 12:54 am
RECOMMENDED

Israeli police brutally attacked Bedouin protesters Thursday in the latest unrest over a tree-planting project in the Negev desert, a day after authorities appealed for compromise, an Agence France-Presse (AFP) journalist said, while an AFP photographer was also injured.

Protesters have held a series of demonstrations in recent days over the environmental scheme in southern Israel's arid desert region, posing a challenge for the fragile coalition government.

Bedouin, who are part of Israel's 20% Arab minority, have long opposed tree-planting initiatives in the Negev, blasting them as a de facto government land grab in areas they call home.

"Police dispersed the demonstrators who blocked a road in the Negev and threw stones at the police," Israeli security forces said in a statement.

Thirteen people were arrested in the events, the statement added.

An AFP photographer was lightly injured during the clashes.

The latest unrest in the decadeslong dispute has attracted fresh attention given the makeup of Israel's coalition government, led by right-wing Prime Minister Naftali Bennett.

Bennett's government counts on the backing from the leader of the Arabic Raam party, Mansour Abbas, whose core political support comes from Bedouin in the Negev.

Nearly half of Israel's 300,000 Bedouin live in villages in the Negev that Israel does not recognize and has razed in the past.

Abbas told Israel's Channel 12 News on Tuesday that his party will not vote with the coalition unless the tree planting is halted and formal negotiations with Bedouin leaders are launched to seek a compromise.

On Wednesday, Social Affairs Minister Meir Cohen claimed that a "compromise" had been reached that would allow for "accelerated negotiations" to take place.

But this does not seem to reflect the realities on the ground as the violence has continued.

The right-wing Regavim environmental group called on Bennett's government "to take a firm position against the Raam Party's threats" and to ensure tree-planting projects continue.