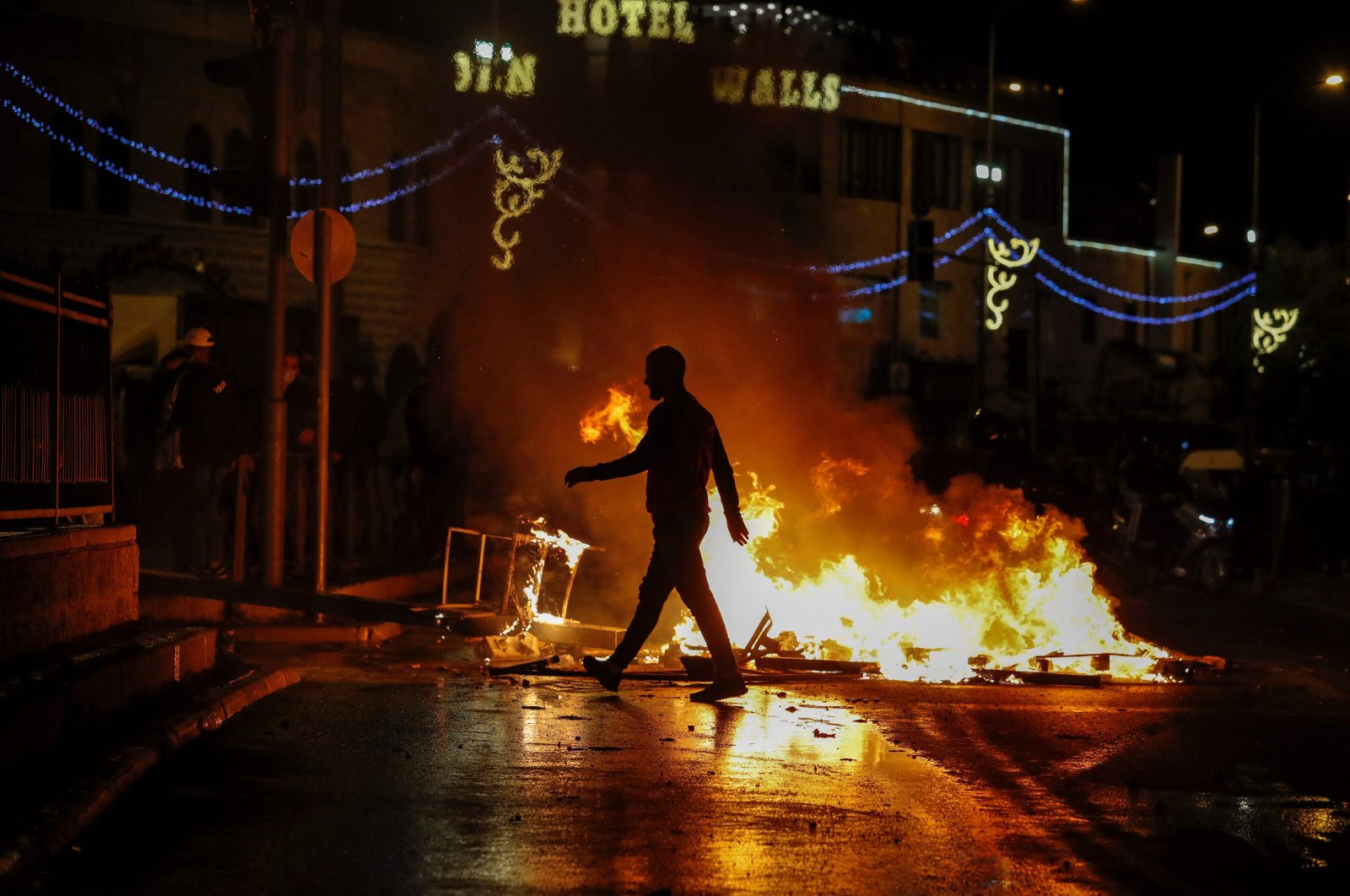 Streets burn as members of the Israeli security forces are deployed during clashes with Palestinian protesters outside Damascus Gate in the Old City, East Jerusalem, occupied Palestine, April 22, 2021. (AFP Photo)
by Agencies Apr 23, 2021 10:47 am
RECOMMENDED

Over 100 Palestinians and 20 Israeli police were injured in overnight clashes in Israeli-occupied East Jerusalem on Thursday amid an Israeli extremist march in the Old City.

The violence broke out outside one of the entrances to the walled Old City where far-right Israelis had completed a march, during which participants harassed Palestinians and chanted "death to Arabs" and some waved banners reading: "Death to terrorists." As Palestinians heard reports of the Israeli crowd approaching, they gathered in the thousands near Damascus Gate with ambulances racing up and down the crowded backstreets with their sirens blaring.

There have been nightly disturbances in the area since the start of Ramadan on April 13 with Palestinians complaining that police were blocking access to the promenade around the walls, a popular gathering place for Palestinians after the end of the daytime Ramadan fast.

"Palestinians love to relax in this area after evening prayers at Al-Aqsa Mosque, but the occupation (Israel) doesn't like it. It's a matter of sovereignty," said Jerusalem resident Mohammad Abu Al-Homus, pointing to metal barricades thrown up by police in the area in recent weeks, according to Reuters.

Police say the measure is part of its efforts to ensure that tens of thousands of Muslim worshippers have safe access to the main Islamic prayer site in the Old City, known as the Noble Sanctuary.

"Since Damascus Gate is the main way to reach and enter the Old City, police forces carry out field activities using various means to prevent friction, violence and confrontation, and to maintain order and security in the area," said a police spokesperson.

Police said that after night prayers at Al-Aqsa mosque in the Old City "hundreds of rioters began disrupting the order violently, including throwing stones and objects at forces." Stun grenades were fired and water cannon deployed to disperse the "rioters" and force them toward less central areas of East Jerusalem, police said. Police said officers attempted to "distinguish between them and those who finished prayers" and were not involved in the events.

The Palestinian Red Crescent said it had treated at least 105 people, with some 20 of them hospitalized. Israeli police said 20 officers were wounded, three of whom were taken to hospital.

"It was like a war zone; it was dangerous," a Palestinian who was near the clashes outside the Old City told Agence France-Presse (AFP). "That's why I left the place."

Tensions were high in Jerusalem after a series of videos posted in recent days showed young Arabs attacking ultra-Orthodox Jews, with Jewish extremists taking to the street bullying Arabs in nightly confrontations. On Thursday night, the Israeli right-wing extremist group Lehava organized a march ending opposite the Old City attended by hundreds.

Police reported "a number of incidents overnight in which civilians were attacked, some of whom needed medical treatment."

Jerusalem Mayor Moshe Lion said he tried to cancel the Lehava march, but police told him it was legal, noting that "dozens" of Jews who attacked Arabs had been arrested in the past two weeks.

Speaking with public broadcaster Kan, Lion said he was in talks with leaders of the Palestinian East Jerusalem neighborhoods "to end this pointless violence."

The Palestinian presidency, meanwhile, condemned "the growing incitement by extremist far-right Israeli settler groups advocating for the killing of Arabs, which in recent days manifested in a wave of attacks against Palestinian civilians in the Old City."

A statement late Thursday on the official Palestinian news agency Wafa urged the international community to protect Palestinians from the "settler" attacks, which it alleged were encouraged by the Israeli government.

In all, police said they arrested over 50 people overnight, without distinguishing between Israelis and Palestinians.