Israel's use of deadly force under spotlight again after shooting 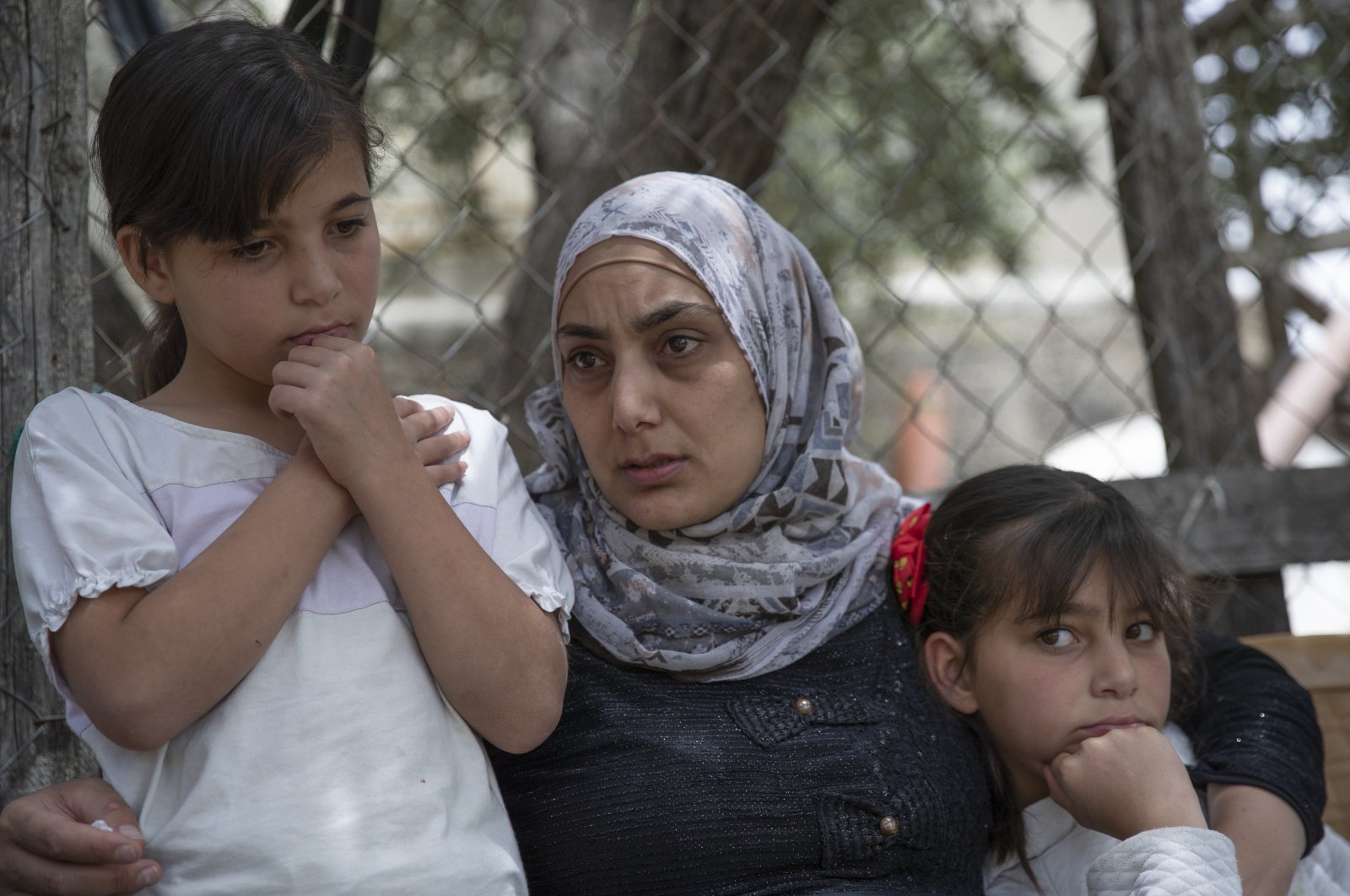 Somaya, the wife of Palestinian Osama Mansour, who was shot to death by Israeli soldiers at a temporary checkpoint in the occupied West Bank earlier this month, holds their 10 year-old twins Nissan, left and Bissan, right, at their family house, in the West Bank village of Biddu, west of Ramallah, Tuesday, April 20, 2021. (AP Photo)
by ASSOCIATED PRESS Apr 23, 2021 10:14 am
RECOMMENDED

Hours after Israeli soldiers shot and killed Osama Mansour at a temporary checkpoint in the occupied West Bank, the military announced that it had thwarted a car-ramming attack — but the facts didn't seem to add up.

By all accounts, Mansour had initially stopped his car when ordered to do so. His wife, the mother of his five children, was sitting in the passenger seat. And after the soldiers sprayed the vehicle with gunfire, killing him and wounding her, they declined to arrest her as an accomplice.

Witnesses say the soldiers killed Mansour for no apparent reason, part of what rights groups say is a pattern of fatal shootings of Palestinians by Israeli forces under questionable circumstances. The debate over the soldiers' conduct echoes that over the high-profile police killings of Black Americans in the United States.

The conviction this week of former Minneapolis, Minnesota, police officer Derek Chauvin in the killing of George Floyd, who police initially said had died of a “medical incident" during a "police interaction,” drew attention to the accuracy of official statements about deadly encounters.

In its initial statement, the Israeli military said the vehicle had accelerated “in a way that endangered the lives of the soldiers” and that forces opened fire to “thwart the threat.” But shortly afterwards, the military said the shooting was under investigation, without elaborating.

A military spokeswoman declined to answer detailed questions about the incident submitted by The Associated Press, including whether the army still believes it thwarted an attack.

Somaya, the widow of the deceased, says her husband took her to see a doctor in the early hours of April 6. On the drive back to their home village of Biddu they passed through the village of Bir Nabala, just outside Jerusalem.

They saw Israeli troops and armored jeeps up ahead, a common sight in the occupied West Bank, where Israeli forces often carry out overnight arrest raids.

She said two soldiers came over to the car with their rifles pointed at them. One of them ordered Osama to shut off the ignition, and he complied. The soldier asked where they were from and what they were doing, and they told him, she said.

“He said 'Fine, OK, go.' So we started the car, we moved forward, and a second later they opened fire," she said. “I froze out of fear, with broken glass falling over my head and the sound of bullets. It was very scary."

She said the car veered back and forth. She called out to her husband to go faster, then saw that he was slumped between the seats and took the wheel until they reached some people who helped them get to a hospital.

The Israeli human rights group B'Tselem says it interviewed two witnesses who largely corroborated her account. Roy Yellin, a spokesman for the group, said the fact that Somaya was not arrested strongly indicates that the military did not think it was an attack. She has been summoned for questioning next week, but there's no indication Israel views her as a suspect.

“The army is not very conservative about detaining Palestinians who are suspected of anything," Yellin said, pointing to the routine arrests of protesters and stone-throwers.

B'Tselem has documented several similar incidents in recent years, in which Israeli forces said they opened fire to prevent car-ramming attacks, killing or wounding Palestinians, only to later back away from the claims without making arrests or pressing charges.

"There’s a very trigger-happy approach in the West Bank in which Palestinians are guilty until proven otherwise,” Yellin said.

International law and the Israeli military's rules of engagement say lethal force can be used in life-threatening situations. But rights groups say Israel often falls short of that standard and rarely punishes wrongdoing by its security forces. B'Tselem says it stopped referring such cases to military authorities in 2016 after concluding that doing so was ineffective.

Yellin says Israel only prosecutes wrongdoing in rare cases in which there is overwhelming evidence. Even then, soldiers often get light sentences.

The military said it investigates every incident in the West Bank in which a person is killed. “In cases where a deviation from the rules is found, steps are taken according to the circumstances of the case,” it said.

The military pointed to an incident in March 2019 in which a soldier shot and killed a Palestinian after mistaking him for another individual suspected of throwing stones at passing Israeli vehicles. Under a plea bargain, the soldier was sentenced to three months in prison and demoted, it said.

The International Criminal Court will likely scrutinize Israel's handling of such cases as part of a probe it launched earlier this year into possible war crimes. Israel has condemned the investigation, which was requested by the Palestinians, and says the court is biased against it.

Earlier this month, Israel said it would send a formal letter to the ICC rejecting its mandate. Israel denied committing any such crimes and said it was able to investigate and prosecute any violations by its forces. That was two days after Mansour was shot dead.

Israel is not a party to the ICC, but Israelis could be subject to arrest in other countries if the court hands down warrants.

In the meantime, with little hope for accountability, Somaya is left to raise her five children alone.