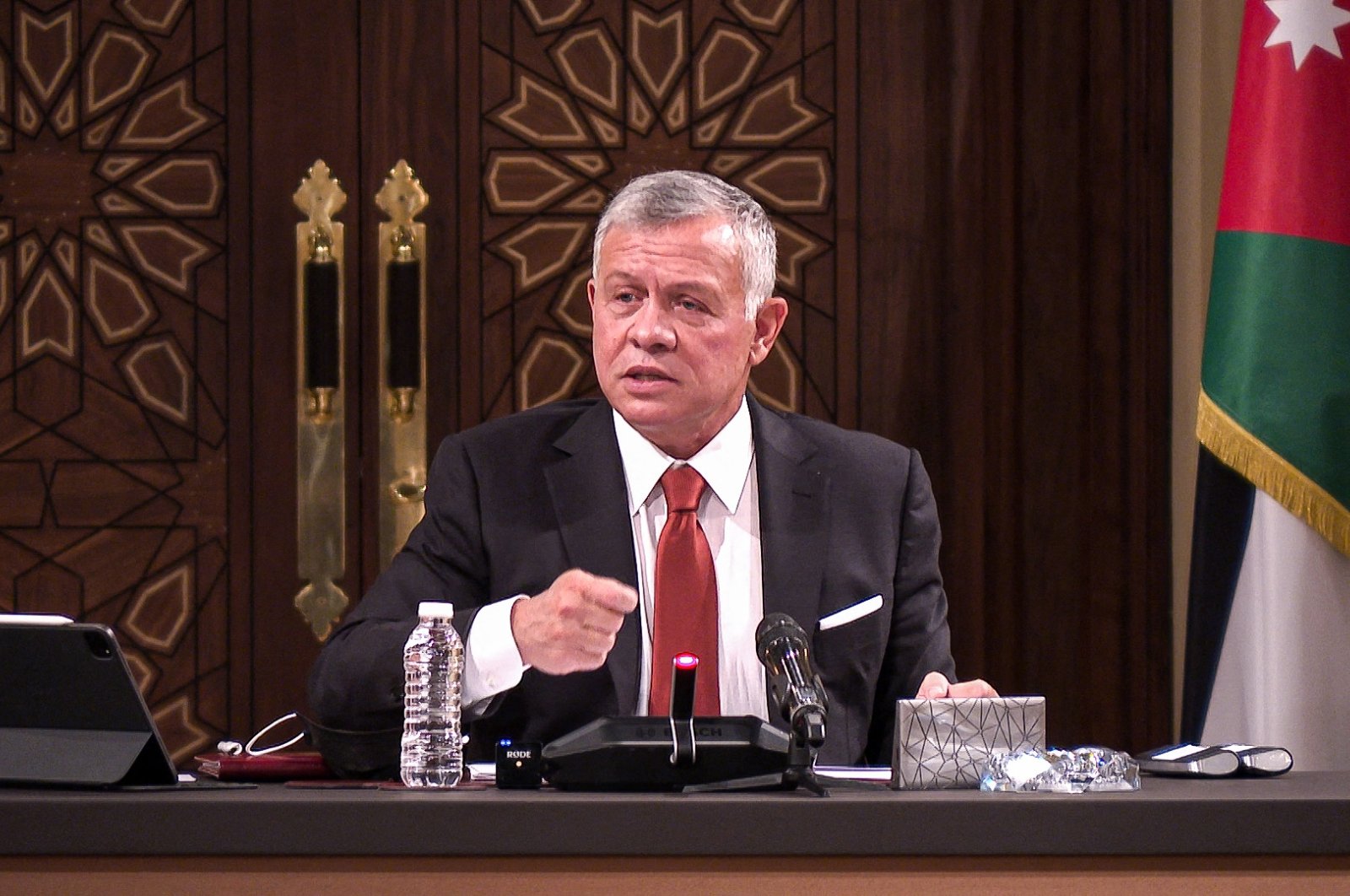 Jordanian King Abdullah II speaks during a meeting at the House of Representatives in the capital Amman, Jordan, March 23, 2021. (Jordanian Royal Palace via AFP)
by Agencies Apr 07, 2021 8:33 pm
RECOMMENDED

Jordan’s King Abdullah II broke his silence Wednesday after a feud with his half-brother Hamzah, saying the attempted “sedition” had been quashed and that the country was now stable and secure.

But he said the rift caused him shock, anger and pain.

The statement marked the first time the king has addressed the internal crisis that erupted over the weekend when Prince Hamzah, his half-brother and former crown prince, was confined to his home and accused of being part of a plot to destabilize the kingdom.

“I speak to you today as my family and tribesmen ... to reassure you that the sedition has been buried,” said the statement, which was read by a newsreader on Jordan TV.

“The challenge of the last few days was not the hardest or the most dangerous to the stability of our nation, but it was the most painful because those who are party to the sedition were from our own home,” it noted.

“Nothing can come close to the shock and the pain and anger I felt, as a brother, and head of the Hashemite family, and as a leader to this dear people,” added the statement.

He said Prince Hamzah, who has not been seen or heard from in days, was “with his family at his palace, under my care.”

“He has committed before the (Hashemite) family to follow the path of his parents and grandparents, to be faithful to their message, and to place the interest of Jordan, its constitution and its laws above all other considerations.”

There is no sign that authorities have released up to 18 other detainees, including members of one of the powerful tribes on which the monarchy has historically relied.

Foreign Minister Ayman Safadi Sunday had charged that the plotters had linked up with foreign parties but declined to identify them.

Authorities have meanwhile imposed a sweeping gag order on any coverage of the royal dispute in a sign of how sensitive they are to how it is being perceived.

Jordan was already grappling with an economic crisis exacerbated by the coronavirus pandemic, with one in four people out of work.

“The dispute with Prince Hamzah shows that the kingdom can no longer use its international standing as a mediator in regional conflicts and (being a) bulwark of security for the West without addressing growing economic and political challenges at home,” said Tuqa Nusairat, an expert at the Atlantic Council.

“Jordanians have been consistently expressing concerns over the direction of the country, including publicly protesting,” she added.

The crisis in the royal family erupted Saturday when Jordan’s military chief of staff visited Prince Hamzah and warned him to stop attending meetings with critics of the government. Things quickly escalated, with Hamzah accusing the security establishment of threatening him and ordering the general to leave his home.

Authorities placed the former crown prince under a form of house arrest and detained 18 people, including former senior officials. On Sunday, the government said Hamzah and others were involved in a “malicious plot” against the kingdom’s security with foreign support.

Abdullah and Hamzah are both sons of King Hussein, who ruled Jordan for nearly a half-century before his death in 1999. Abdullah had appointed Hamzah as crown prince upon his succession but stripped him of the title in 2004.

The government imposed a sweeping gag order on coverage of the dispute after an audio recording of the meeting between Hamzah and the chief of staff, Gen. Yousef Huneiti, raised questions about its allegations of a foreign conspiracy. Neither mentioned any such plot in their exchange, which was recorded surreptitiously and circulated online.

Family members of those who were arrested in connection with the alleged plot meanwhile said they have had no communication with authorities or the detainees.

Those arrested include Yasser al-Majali, Hamzah’s chief of staff, and Samir al-Majali, both prominent members of the Majali tribe.

“We don’t know where he is,” said Yasser al-Majali's brother, Abdullah. He said they have been unable to reach any officials and have not been informed of any charges against their relatives.

"If there is anything against them, take them to court for a fair trial,” he said. “We don’t want any trouble. We care about stability and we want our people to be released.”

The Majali tribe issued an angry statement immediately after the arrests, calling it a “black day” in which the tribe's dignity had been insulted.

It said Samir was arrested at gunpoint while shopping in a market in the town of Karak, where the tribe is based. It said Yasser was taken from the home of another tribal sheikh in a raid that violated tribal traditions. “The armed forces came in 20 vans and wore masks,” it said, adding that the men would have come in on their own had they been summoned for questioning.

The tribe denied the men had plotted against Jordan and warned against involving them in “any internal or family dispute.” On Wednesday, a video surfaced of the tribesmen holding a small rally demanding the release of their relatives and chanting, “Where is Hamzah?”

Jordan has a large Palestinian population, including more than 2 million refugees from past wars with Israel and their descendants. The monarchy has granted most of them full citizenship but has historically viewed them with suspicion. Its main base of support are powerful tribes from the east of the Jordan River who dominate the security forces.

For decades, the monarchy has cultivated close ties with the United States and other Western nations, which it has used to press for the creation of a Palestinian state including the West Bank and East Jerusalem that Israel captured from Jordan in the 1967 war.

That strategy has hit a wall in recent years as the peace process has ground to a halt. Israel and Jordan made peace in 1994 and maintain close security ties, but relations have soured amid a series of recent diplomatic spats.

At the same time, Gulf countries have been cultivating closer ties with Israel over their shared antipathy toward Iran, where relations were made public last year when the United Arab Emirates (UAE) agreed to normalize relations with Israel in a U.S.-brokered deal. Saudi Arabia has at times appeared to be weighing a similar move.

That could jeopardize Jordan’s special status.

The crumbling of the longstanding Arab consensus that normalization with Israel should be linked to concessions in the peace process, meanwhile, undermines the prospect of creating a Palestinian state, a key Jordanian interest.

Jordan will likely need foreign aid as it recovers from the coronavirus, which has devastated its tourism sector and crippled the wider economy. The desert nation borders Israel, the occupied West Bank, Syria, Iraq and Saudi Arabia, and hosts hundreds of thousands of Syrian refugees amid a population of just 10 million.