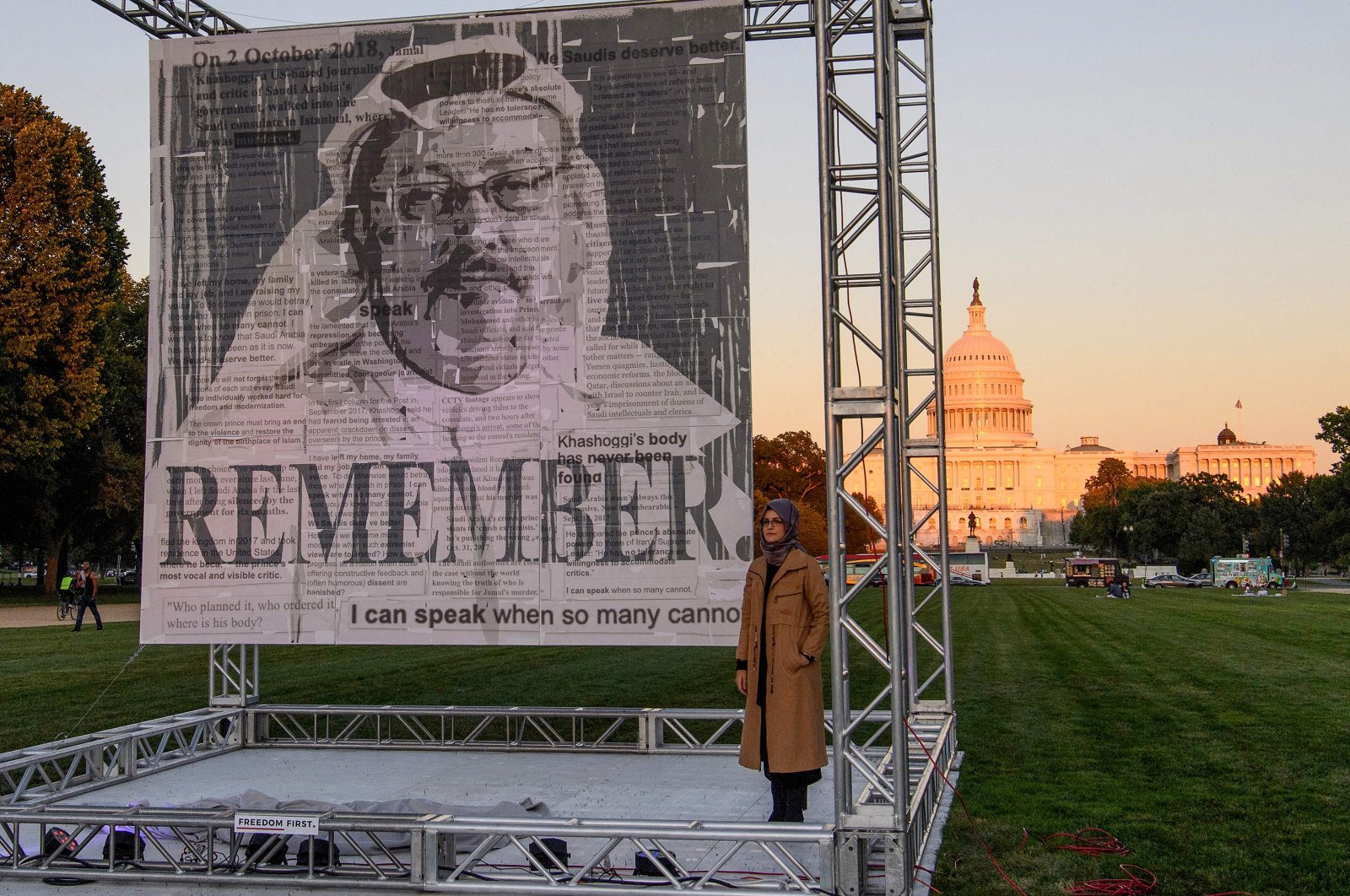 Turkish writer Hatice Cengiz (R), fiancee of Saudi journalist and dissident Jamal Khashoggi, poses next to a portrait of Khashoggi after unveiling it on the National Mall in Washington, D.C., U.S., Oct. 1, 2021, during a memorial ceremony marking the third anniversary of his murder at the Saudi Consulate in Istanbul. (AFP Photo)
by Agencies
Oct 02, 2021 10:39 pm

On the third anniversary of the murder of Jamal Khashoggi, his fiancee urged U.S. President Joe Biden to fulfill his promise to not let the Saudi journalist's death be in vain, during an emotional speech in the U.S. capital late Friday.

Hatice Cengiz spoke at an event organized by the Freedom First campaign on the National Mall to mark the third anniversary of the journalist's murder.

"Jamal was not just a journalist. He was not just a prominent champion for the rights of Saudi people and the broader Arab world. He was my Jamal and he was taken from me," said Cengiz.

Khashoggi, a U.S. resident and columnist for The Washington Post, was brutally murdered and likely dismembered after being lured by Saudi officials to their consulate in Istanbul in October 2018. While Riyadh initially denied any role in his death, it later sought to pin blame on what it said was a botched rendition operation. That explanation has been widely rejected.

According to U.S. and Turkish officials, a waiting Saudi hit squad strangled him and dismembered his body, which has never been retrieved.

A report released in February by the Office of the Director of National Intelligence (ODNI) under the Biden administration said Saudi Crown Prince Mohammed bin Salman (MBS) approved the killing.

The report added that the crown prince, the kingdom’s de facto leader, "approved an operation ... to capture or kill” Khashoggi.

Cengiz recalled that Donald Trump was the U.S. president when the Saudi journalist was murdered, saying the former leader of the free world continued to support the Saudi government and refused to hold MBS accountable for the grisly killing.

She then quoted Biden's remarks when he was a presidential candidate: "Khashoggi and his loved ones deserve accountability. Jamal's death will not be in vain."

"President Biden and Vice President (Kamala) Harris! When will you step up and fulfill your promises? When will you translate your words into action?" Cengiz asked.

"Hatice we are with you. We must and will fight the good fight for Jamal and all Saudi human rights champions until justice and freedom prevail," said Jordan.

Earlier, a group of representatives from rights organizations that included the Council on American-Islamic Relations (CAIR), Dawn MENA and Code Pink gathered outside the Saudi Embassy in Washington, demanding justice for Khashoggi.

"Jamal's legacy lives on, and we will never forget the Saudi government's horrific crime," said CAIR National on Twitter.

Separately, the editorial board of The Washington Post posted an article Friday that said despite a CIA conclusion that MBS approved the killing, Biden decided not to hold him accountable and the U.S. continues to do business with the kingdom, including a recent visit by National Security Adviser Jake Sullivan to meet the Saudi crown prince in Riyadh.

"There’s been no justice for Khashoggi, and there are darkening clouds on the horizon for others who would speak out," said the board.

Stating that Khashoggi was "acutely aware of the difficulty" when he was writing, the newspaper said it is a good moment to reflect on the duty to speak out against authoritarian rule.

"The best way to honor his memory is to relentlessly pursue the freedom he sought for Saudi Arabia – and build it everywhere," said the board.

U.S. president at the time, Trump played down the episode, saying it was more important that Saudi Arabia buys U.S. weapons and shares hostility toward Iran. Biden vowed a tougher approach, declassifying intelligence and imposing sanctions on Saudis although not on the crown prince himself.

Sullivan traveled to Saudi Arabia, where MBS is also defense minister, largely to discuss the crisis in Yemen where the kingdom has led a devastating air campaign aimed at defeating Iranian-backed Houthi rebels.

The International Press Institute (IPI) also said Friday that there is still no justice for the killing of Khashoggi.

"3 years ago tomorrow, Jamal Khashoggi was murdered in the Saudi consulate in Istanbul. Still no justice for this heinous act. Saudi Arabia and MBS have suffered no meaningful consequences. But we haven't forgotten. The IPI network demands justice,” the IPI said on Twitter.

"The IPI global network strongly condemns the continued impunity in this case and we continue to demand full accountability for this atrocious act,” said IPI Deputy Director Scott Griffen. He said the Saudi regime, "a long-time ally of Western countries, has suffered no meaningful consequences for the brazen elimination of a critical journalist."